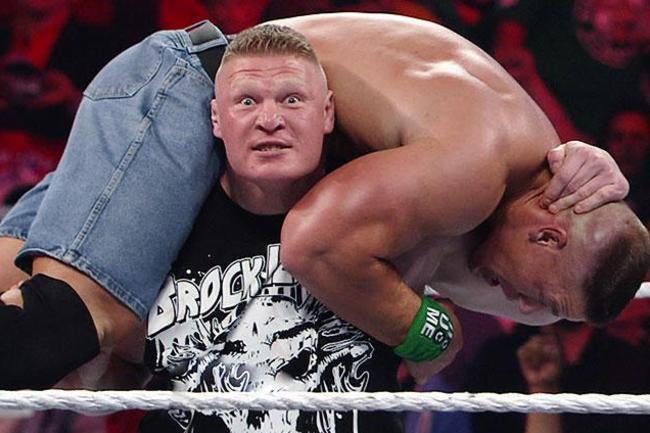 Brock Lesnar isn’t your average professional wrestler. While some WWE performers have a background in amateur wrestling, football or mixed martial arts, Lesnar has competed in all three. And amazingly, the latter two actually came with no prior experience after he had already established himself as a pro wrestling superstar.

John Cena had long ago turned “Never give up” from his wrestling catchphrase into a motto for sick children who have to fight daily more than the WWE superstar ever has inside the ring.

His in-ring persona is that of a “beast incarnate,” as manager Paul Heyman describes him. But Lesnar isn’t some over-the-top character who needs a hype man. His achievements outside of pro wrestling have added some legitimacy to a company that hasn’t really sought it since 1989, when WWE honcho Vince McMahon admitted pro wrestling was, well, more entertainment than sport in order to avoid the watchful eye and hefty fees of state athletic commissions.

We’re not quite sure how Hulk Hogan or Ric Flair would have fared in a freestyle wrestling match, an NFL game or a UFC fight, but we’ve seen Lesnar in all three — and we’ve also watched him suplex both Hogan and Flair for good measure. Lesnar is the most accomplished athlete in pro wrestling history and a big reason why the WWE is getting more mainstream attention than it has in years. His decision to turn down an opportunity to return to the UFC and re-sign with the WWE earlier this year got widespread media coverage and was announced on SportsCenter.

Before Lesnar headlines WWE’s annual SummerSlam pay-per-view event Sunday at Barclays Center in Brooklyn, let’s take a look back at some of Lesnar’s greatest accomplishments in and out of the ring.

Lesnar’s athletic career began in Webster, South Dakota, where he went 33-0 as a wrestler during his senior year at Webster High before winning the national junior college championship at Bismark State College. Lesnar then transferred to Minnesota on a full wrestling scholarship and established himself as a two-time All-American.

He won the Big Ten title and finished second in the NCAAs as a junior at Minnesota before winning the Big Ten again and claiming the 2000 Division I national heavyweight championship as a senior. He finished his college career with a 106-5 record, and his “Wheel of Death” maneuver in the 2000 NCAA tournament is still talked about to this day.

Read the rest of this column here!

Related Itemsbrock lesnarFeaturedwwe
← Previous Story Should Matt Riviera be granted an NWA championship match?
Next Story → 20 Wrestlers You Forgot Were in ECW