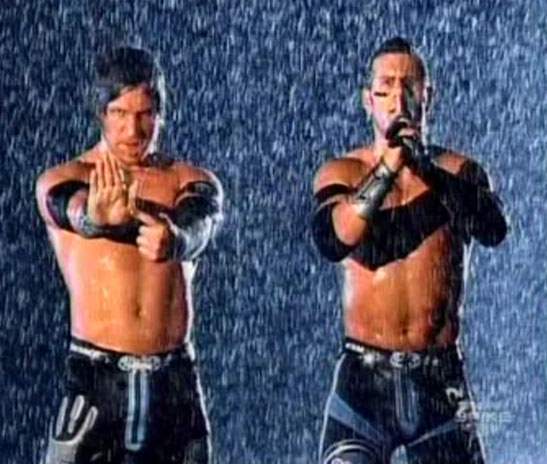 This past Saturday it was announced during the Ring of Honor 8th Anniversary Show that when they return to NYC, they will have the Motor City Machineguns.

Hey TNA, what the hell are you doing?

To me, one of the biggest problems with TNA is the fact they lend their talent to various independent promotions and Ring of Honor. In a way, I don’t consider Ring of Honor an indy wrestling promotion anymore because they do tour, has consistant shows, and most importantly has a national TV deal. Even though HDNet is a channel that seems to be nowhere, it is a still a cable deal.

Awhile back, TNA stated that there was going to be a new rule where wrestlers can only work TNA and would not be able to work anywhere else. I thought this was a great move. It’s not like you see WWE sending their guys to your local indy show to work a match. Do you know why? Because they want you to come to THEIR show. If WWE started putting their talent on indys and ROH, then I could almost guarantee their house show attendance would go down a bit.

For those that disagree, think about this. Hardcore Hak wasn’t allowed to go back to ECW to be the Sandman for one night. Raven was not able to go back to ECW until he was released from WCW. All the companies that make it big do not let their talent go anywhere else while they are under contract. Or if they have some sort of deal with another promotion (ex: WCW and promotions in Japan). Personally, I doubt very much that TNA has some kind of deal with Ring of Honor. At the same time, I do realize I could be wrong with this assumption as well.

There is one situation that I can think of when WWE let one of their guys compete somewhere else. I would like to mention that because I’m sure lots of people will point out this situation. Mike Awesome had signed with WCW but was still ECW champion. So Vince McMahon let Taz, who was a contracted WWE wrestler, fight Mike Awesome for the ECW title at an ECW event. Taz beat Awesome and was able to appear on WWE TV.

Now let me remind you what happened after everything went down. Triple H, the current WWE champion, fought Taz on Smackdown (I think) of what week. It was billed ECW Champion vs WWE champion. Triple H got the win and thereby showed the world that the WWE champion was far superior than the ECW champion.

So, in theory, Vince and the WWE DID benefit from this exchange by proving their superiority over ECW. Soon Taz would lose the belt back to an ECW wrestler and things were as usual. To be honest, it also was not a bad move by WWE and showed me just how smart the people running WWE was at that time. There was no intentions of having a big storyline at that time (ECW was still in business), the message just had to be sent that the WWE is better than ECW by showing Taz against Triple H. At least that is how it was from a booking standpoint, another whole column can be dedicated on if WWE or ECW was better at the time.

So unless the plan is to have Chris Sabin come into Ring of Honor and beat Austin Aries for the Ring of Honor Championship, have him appear on TNA and have him lost to AJ Styles (or Samoa Joe, depending on the PPV results), then I don’t understand the mindset of TNA.

More people know TNA over ROH. Spike TV MUCH MUCH better network than HDNet. TNA has guys like Ric Flair, Hulk Hogan, and Eric Bischoff. With all due respect, only ROH has is Cornette that the casual fan would know.

TNA gains nothing from letting their talent compete other places, so why do they do it? I don’t know if I’ll ever get an answer.

Check out the latest episode of Sunset Flip Wrestling Show at sunsetflipwrestling.podomatic.com and have a great week.