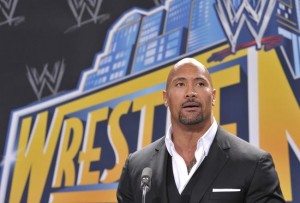 The Rock as the WWE Champion on the road to WrestleMania would be worth more than a billboard in Times Square.

A report from PWInsider.com, courtesy of WrestlingInc.com says:

There are big plans in place for The Rock going into early 2013 and the WrestleMania season. Besides the WWE Title match with CM Punk at the Royal Rumble, Rock is set to make more regular appearances and will be a focal point of the company.

I fully expected The Rock to walk out of this year’s Royal Rumble with the WWE title when the match with CM Punk was unofficially teased and made at the Raw 1000 episode in July.

I didn’t expect CM Punk to have never lost the title between July and January. This amazing streak of days wasn’t something I thought would be going on even now in the month of November. I did expect that by the time January came around, CM Punk would walk into the Royal Rumble with the belt.

Assuming he doesn’t lose it between now and Rumble, CM Punk will have been champion for 434 days straight. He’s beaten John Cena several times, Ryback, Daniel Bryan, Chris Jericho, Alberto Del Rio. Who better to finally end it than The Rock?

As a fan, I personally don’t care to see The Rock as the title holder. However, on paper, it reads as a great story. In business, a publicity high spot.

WWE is giving its world title to one of the top-paid Hollywood actors, and they don’t get the backlash similar to David Arquette’s title win/reign.

The Rock will have the film GI Joe: Retaliation coming out on March 29th, according to IMDB.com, nine days prior to WrestleMania29, when one would assume he would be in the main event defending the title.

Vince McMahon’s eyes now pop out of his head, as his company’s title gets blended with his craving to be mainstream and big in Hollywood.

Every photo, daytime talk show, late night talk show, entertainment magazine show, paper magazine article and TMZ photo that is aimed at promoting Dwayne “The Rock” Johnson and the new movie, ALL FEATURE AND INTRODUCE HIM AS CURRENT WWE CHAMPION.

Title over his arm, free press for WrestleMania 29 and whoever he is in a match with (all the more reason it should be both John Cena and CM Punk in a triple threat).

You know how these promotional interviews go with guys like Jay Leno.

Jay: “He is starring in the new movie coming out on March 29th titled GI Joe: Retaliation and he is also the WWE Champion. Please welcome Dwayne “The Rock” Johnson.”

*Applause as The Rock walks in with his million dollar smile while holding the WWE title on his shoulder.*

Jay: “Great to have you back. Boy, you just get bigger and bigger every time I see you.”

The Rock: “Thanks for having me back. Yeah, man, gotta stay in shape, got a lot going on.”

Jay: “Well yeah, not only are you in a GI Joe movie, but you’re back in wrestling and the champion.”

You’re off and running. Repeat, repeat, repeat. WWE’s name is being dropped more times than Hulk Hogan’s name in a conversation with Brian Knobbs.

I’m all in favor of WWE not relying on part-time stars to be the only money makers as much as they do. The Rock, Brock Lesnar, The Undertaker and Triple H to name a few.

But bottom line is, they still draw. So if you have them, you pay them, use them.

If WWE’s got a top Hollywood star as WWE Champion on the payroll in the most significant months of their year, take advantage of him for all that he’s worth.

Check out the article here: http://bleacherreport.com/articles/1400192-wwe-why-the-rock-will-be-champion-in-2013-and-how-brilliant-of-a-move-it-is