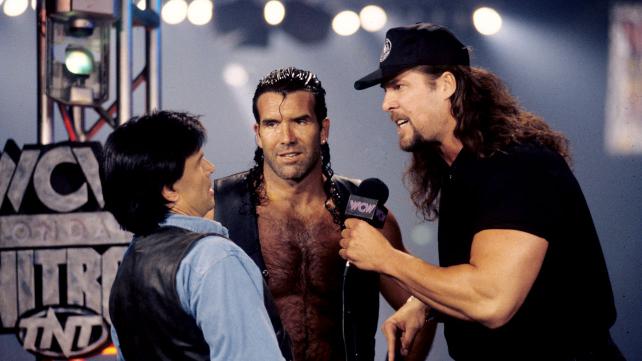 May 27th 1996 saw the emergence of the post-modern period in professional wrestling’s mainstream with the debut of Scott Hall on Nitro. Post-modernism as an artistic movement is broadly characterized by the concept of deconstruction. It demonstrates a heightened self-awareness of genre and assumes a rich schematic repertoire on the part of its audience. By encouraging its literary audience to consider generic norms, these norms can be deconstructed and explored. In essence, post-modern art knows it is art and exposes the mechanics of art.

When Scott Hall walked out of the crowd on Nitro and delivered his ‘You Want a War?’ speech with its references to a rival wrestling company, WCW was playing to its audience’s understanding and knowledge. This aspect was further refined on November 17th 1997 when Rick Rude appeared on both Raw and Nitro on the same night. Now the audience was expected to understand the TV production aspect of professional wrestling and how some shows were recorded and other shows were live. Appreciating this part of the wrestling world was crucial to the moment as an audience who had never considered this would have missed out on the essential shock of the event. These two features, the deconstructed generic norms through worked shoots, and the recognition of and reliance upon a literate audience, the smart-mark, firmly define wrestling’s post-modernism, what WWE have since branded the ‘Attitude Era’.

The problems which WWE have faced since, a lack of artistic direction and inability to get audiences to connect with their art, can be explained by understanding the post-modern movement in wrestling. Instead of just being the result of industry monopoly removing the need to innovate, it points to the problem all art forms face after post-modernism occurs, namely what comes next? After norms have been deconstructed, can new ones be formed? Once an audience has been encouraged to view a piece of art cynically, can they reconnect? What does post-post-modernism look like? These are the questions that have been facing WWE for the last decade and a half and so far, just as in the rest of the art world, no convincing answers have been put forward.