Home / Columns / Worth Paying For? 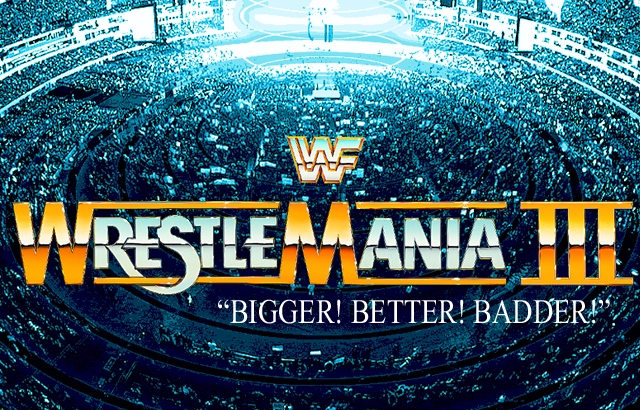 Hitting the Ropes: Worth Paying For?
By David Buckler, OWW editor-in-chief

This weekend is WWE’s Elimination Chamber pay-per-view. The return of the Chamber! What’s incredible is that the month of May features two…TWO…WWE pay-per-view events (and one special NXT taping). That seems excessive but what do I care? I pay my $9.99 per month regardless. So what do I care if the WWE runs a PPV every day? It doesn’t cost me any more money!

But it does bother me because I grew up in the 1980’s when a pay-per-view was an extremely special event, one that made you rearrange your weekend to make sure you were in front of the TV. WWE’s version of “appointment television”.   Now you can catch the replay right after the show…or all week long on the WWE Network. The immediacy of the moment is gone.

That makes me kind of sad. My goodness, I’m so old I even remember the WWF BEFORE pay-per-view. It’s hard to believe that the first WrestleMania was actually shown on closed circuit TV, which sounds like something out of the 1950’s, doesn’t it? Closed circuit television? You had to buy a ticket to watch a wrestling show on a giant screen TV in some local arena? Just bizarre, but nobody knew any better. You had no other choice.

Eventually the WWF evolved and figured out how to utilize this concept of pay-per-view, and in doing so the events themselves seemed to take on a whole new sense of importance. PAY PER VIEW. This was revolutionary to someone my age. Even the term sounded cool: PAY PER VIEW. I could watch all the squash matches I wanted on WWF Superstars, but if I wanted to see Hulk Hogan defend his world title in a steel cage against the behemoth King Kong Bundy, I had to beg…I mean BEG…my parents to “call their local cable operator”. It was thrilling and exhausting and stressful and…important. If my parents wouldn’t buy the show for me I was going to miss out and that would have been tragic.   Maybe other kids had it better, but I literally had to plead for my parents to order the WWF pay-per-views. In fairness at the time they seemed kind of expensive, and my parents weren’t quite sure why I liked that “wrestling stuff”. I’m not sure I could explain it myself; I just knew that I loved it and I had to watch these shows.

WrestleMania became a yearly celebration starting in 1985, and over the years the addition of the Survivor Series, the Royal Rumble, and SummerSlam provided a structure to WWF programming ensuring that every 3 months or so I would be glued to my TV. True, Saturday Night’s Main Event provided occasional “can’t miss” match-ups, all wrapped up in a super cool late-night package. I could live another 100 years and Saturday Night’s Main Event will forever be my favorite TV show. It combined good wrestling with a sense of adventure…staying up late, having friends over, ordering pizza…it was the definition of what makes being young so much fun. I had the privilege of attending 3 tapings in person at the venerable Hershey Park Arena and each was amazing in its own way. Hulk Hogan and Andre the Giant vs. King Kong Bundy and Big John Studd. The entire building was shaking with excitement. “Macho Man” Randy Savage and Hulk Hogan forming the Mega-Powers, an event that changed my life at the time. Two years later Miss Elizabeth was making the “Decision of a Lifetime”. 1985. 1987. 1989. Those three shows were milestones of my childhood and nights I will never forget. But even those shows were not as exciting as the actual WWF pay-per-view spectacles.

Each WrestleMania in the 1980’s felt huge, every match felt important. The same goes for every Survivor Series, Royal Rumble, and SummerSlam. Looking back I know that is not the case anymore. History will always be kind to the truly important moments, like Ricky Steamboat vs. Randy Savage, Hulk Hogan slamming Andre the Giant, or the “Macho Man” winning the world title at WrestleMania IV. But I’ll admit there were a few “Jake Roberts defeats George Wells” stinkers along the way as well. I remember being confused because the Conquistadors actually wrestled in a Survivor Series match. So not everything was perfect but if I was watching the match on pay-per-view I FELT the match was important.

Isn’t that the appeal of pro wrestling? The passionate battle between good and evil that sweeps the fans along for the ride. The storytelling between interesting characters. These stories crested at the big WWE shows. Months of programming helped build the anticipation. I know this – I was lucky enough to attend WrestleMania IV and V in person at the beautiful Trump Plaza Hotel and Casino in Atlantic City (well, actually at Boardwalk Hall) and it’s hard to explain the excitement I felt driving from Pennsylvania. Looking back I don’t agree with every booking decision on the show (the WWE title tournament remains an atrocity, I need to write about that soon…) but the overall events made quite an impression on me.

I loved those specific shows but there were plenty of other big moments as well. I will argue with anyone that WrestleMania III is the greatest card of all time. Look at the line-up. Look at the legends up and down the entire card. I mean, Rick Martel, Don Muraco, and Bob Orton were all featured in the opener, all pro wrestling Hall of Famers! Look at the importance of several matches. If you want to argue that “Hulk Hogan and Andre the Giant wrestled a slow, boring match”, then you just don’t get it. At the time it felt massive. MASSIVE! But that’s OK, you’re one of those fans who enjoys today’s pacing and storytelling more than I do. I know that times change, and that wrestling storytelling has been modified over the past 30 years to accommodate more television and (sadly) more pay-per-views. Sadly that’s where wrestling loses me a little bit.

From 1985-1991 the World Wrestling Federation was my favorite form of entertainment. I eventually went to college and paid a little less attention to the business until the Monday Night Wars once again lit a fire under me. I really enjoyed the WWE vs. WCW days, and strangely enough (to me) I found myself watching WCW. I didn’t really love the schedule of monthly pay-per-views but some of the other changes in the business were exciting to me. I really liked the “live” aspect of the weekly shows and the competition between the companies made Monday nights feel like “can’t miss” television. Of course when WCW fell apart that sense of urgency disappeared as well. Now there is only one company that controls the entire market and that lack of true competition is damaging. (Although I think it’s interesting that Ring of Honor and TNA will now share a network, I think this could be a good thing for everyone involved.)

I will always love pro wrestling and the WWE. But the moments that stand out in my mind, the ones that I will never forget, don’t come from In Your House, or Payback, or Fastlane…these secondary pay-per-views. There is the occasional Money in the Bank that produces some nice moments, but in general they come from WrestleMania, and the Royal Rumble, and the Survivor Series, and SummerSlam. The traditional cornerstones of the pay-per-view calendar. All these other pay-per-views blend together, which in some ways blends together WWE history. I can’t keep it all straight…and even the superstars themselves get lost in the shuffle. For instance, I like Seth Rollins…he’s an interesting choice as WWE world heavyweight champion. But what is his big payoff? What is his BIG moment that we should be building to? A defense against Dean Ambrose? Roman Reigns? Brock Lesnar? Some of those matches would be fine…but we’ll probably exhaust these options by July of this year. Where’s the fun in that? The fun is in the WAITING!

Stories need time to breath. Stories need time to develop. Stories need time to evolve. George “The Animal” Steele once had a fascination with Miss Elizabeth that lasted over two years! I remember that story. I have no idea what the Prime Time Players are doing now. I have no idea why I should care about the New Day…they already had their heel turn and they’ve been on TV for like 2 months! Is Wade Barrett “Bad News Barrett” or “King Barrett”, and why does it matter? In the “old days”, the Shield would have stayed together. They would have been the Hounds of Justice for years and when the three members of the Shield finally went their separate ways, they could work a program that would have had a great payoff…one I would have paid much more than $9.99 to see.

March 27, 1988. I remember the exact date of WrestleMania III. I remember going to my friend’s house to watch the show. I wouldn’t miss “Hogan vs. Andre” for the world (although as a Hart Foundation fan I was most excited about their 6-man tag team match). Juxtapose that with today’s WWE. I didn’t even watch Payback. I read the reviews and I’m sure the roster gave it their all but I know Elimination Chamber is only a few days away so there is no time to reflect, and value, that previous show. To me it all becomes so forgettable.

I might tune in to Elimination Chamber this Sunday, or I might not. Maybe I’ll read the results after the show and then watch those matches that get a good review. Whatever the case, nobody else will care what I do. Each person digests this product now in their own way which takes away some of the uniqueness of moment. I do know this, I better not wait too, too long to watch Elimination Chamber because in less than 24 hours after the show WWE Monday Night RAW will be on TV and the stories will continue…all the way to WWE Money in the Bank, a mere 2 weeks later.