Home / Columns / “Why We Wrestle” by Adam Knight

“Why We Wrestle” by Adam Knight 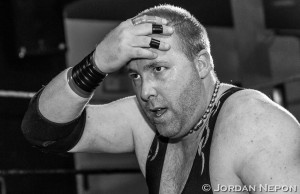 This question has been phrased to me very differently over the years. Often derisively. Occasionally with conceit. The rest of the time open curiosity.

“Why do you wrestle?”

And it is a fair question no matter how it is asked.

The truth is over the course of nearly 19 years as a professional wrestler I have been forced to maintain a regular job for the majority of that time in order to keep a roof over my head. On the independent scene where attendance is spotty because there are hundreds of different options for the paying customer’s entertainment dollar there have been very few stretches where being a wrestler was all I could afford to do.

That’s just the way the industry rolls in today’s world.

And while that sounds insane — trust me, my family’s given me the “you’re insane” speech a couple of times over the years — it’s not really. Truth be told, it’s no different than people struggling away and riding the roads as an actor or a musician. You gotta pay your dues, work your way into a good spot until your reputation builds and you can be working regularly enough to command a reasonable rate.

Sure, ride the roads long enough and earn enough cred and eventually you’ll get a break with a bigger company. But getting a break isn’t the same as making it. Ask any of a thousand wrestlers and they’ve all got stories of “that time WWE / TNA / New Japan looked at me but it didn’t work out.”

That’s just the harsh nature of the business.

So if we’re eliminating purely financial reasons to be a professional wrestler, what is it that motivates us? What is it that keeps me securing bookings where I need to drive long hours in a beat-up van with three other dudes in order to save on costs? That keeps me in the gym six days a week to keep healthy and strong and to look relatively athletic in my tights and boots? That keeps me in a position where I sacrifice time on weekends and evenings with family and friends so I can be in a small town in Saskatchewan to grapple in front of a few hundred people?

There’s no one answer. At least not for me.

So I figured I’d ask some of my friends, and see what their answers are.

Antonio Scorpio: “I would have to say creativity. As lame as it might sound, I consider the ring a canvas, and when you get people in there with the same mind creative mindset, then the matches can be considered works of art.”

“Priceless” Chad Tatum (top photo): “Nowadays it’s honestly really just to hang out with the boys, and because deep down I still love the attention of the crowd. Also, since I’m fully aware that the end of my little career is coming closer it makes me appreciate each show all the more. And the fact that my friends think it’s hilarious and like watching it helps too.”

Jackie “The Jet” Lee: “I’m motivated by the ability and power to motivate others. To make them want to enjoy life, chase their dreams, be healthy and engaged by my matches.”

Leo London: “I love feeling larger than life, having the crowd watching and believing I am the super athlete jerk I portray myself as.”

Darin Corbin: “I am inspired by the ability to use wrestling as an outlet for my creativity. It is an art form to provoke human emotion and to get a reaction of either overwhelming positivity or sheer disdain.  It is a great escape that allows us to remember our passion to be larger than life and to now inspire others to take part in such a great experience. To be the hero or the villain, or anything in between, can not be duplicated so realistically in any other form of entertainment.”

All of those are great reasons. In many respects I agree and equate my own response to all of these performers. These guys have sacrificed their lives and their bodies to put smiles on the faces of men, women and children everywhere and all of them have my respect and admiration for their continued efforts on behalf of the wrestling industry.

But bottom line? Pro wrestling is fun. Love me. Hate me. Getting the chance to entice a crowd, to show off for a few minutes and feel that pure adrenaline rush … there’s nothing quite like it.

And that’s why we wrestle.