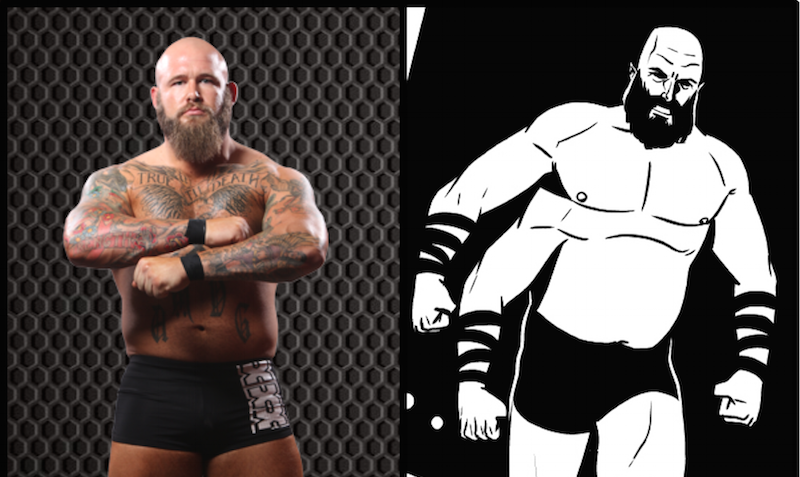 The Toronto duo of writer ANTHONY RUTTGAIZER (aka professional wrestler ANTHONY KINGDOM JAMES) and artist DANNY ZABBAL have, this morning, launched a month-long fundraising campaign via the website Kickstarter to help cover the costs of producing their new comic book series, THE F1RST HERO: FIGHT FOR YOUR LIFE.  Readers who support the project can receive special editions of the first issue, copies of the complete four-issue story and even have the chance to appear in the comic as a supporting character, based on the amount they pledge.

THE F1RST HERO: FIGHT FOR YOUR LIFE follows the adventures of JAKE ROTH, the only sane superhuman in a world where everyone else who has ever manifested powers has gone insane.  These so-called “extrahumans” have been stripped of all their rights and are hunted down by the government because of the threat they pose to society.  In this volume, Jake stumbles upon a mafia-controlled fight club whose three-armed extrahuman champion isn’t afraid to kill his opponents for the twisted delight of his audience.

That new extrahuman threat is ODINSON, the self-proclaimed “God of War”.  Odinson is loosely based on RAYMOND ROWE, one of the stars of the nationally-syndicated RING OF HONOR professional wrestling organization.  FIGHT FOR YOUR LIFE is a sequel to Ruttgaizer’s critically acclaimed 2014 mini-series THE F1RST HERO: THE MONSTER.  The upcoming series, just as the previous one was, will be published by the Pennsylvania-based ACTION LAB COMICS.

The Kickstarter campaign page can be found at http://bit.ly/f1rsthero.  For more information on the fundraising campaign, the series or its creators, please contact [email protected].