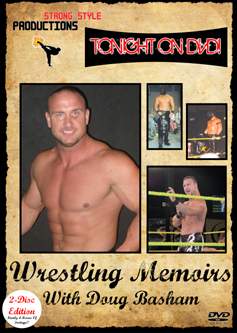 Previously only available on DVD, this was our very first project filmed in full HD, with a goal to releasing on Blu-Ray.

“Wrestling Memoirs” follows former TNA & WWE wrestler, Doug Basham, in his final weeks inside the squared circle when he was in Ireland on a European tour, as he winds down his wrestling career, talking about his storied wrestling career along the way.

Hear how Doug broke into the business, following in his uncles footsteps, how he worked his way up from the independent scene, to the former WWE developmental territory, Ohio Valley Wrestling (OVW), to eventually signing with WWE, and signing with TNA. Doug also speaks candidly about his fellow WWE & TNA workers, and the stories behind his release from both companies, his thoughts on Vince McMahon & Dixie Carter as well as top superstars you know from TV including JBL, Randy Orton and “Stone Cold” Steve Austin.
“Wrestling Memoirs With Doug Basham” runs 131 mins and for the time being is available on Blu-Ray as a European exclusive (Stay tuned for the US Blu-Ray release). Not only is this a “sit-down” interview, but we also followed Doug on the road throughout Ireland, and features some very interesting and candid footage from inside the locker room where no one has previously seen before, and the build-up and wind-down of a wrestling show.
“This is a very exciting time for us at Strong Style Productions. We filmed the project with Doug in early 2009, and it was a great project to be a part of, especially as it was our very first full High Definition shoot, and because it is our first High Definition Blu-Ray release. I am proud to offer wrestling fans the opportunity to see such a project on Blu-Ray in High Definition. To my knowledge, with the exception of a short-run release of the outstanding ‘Heroes of World Class’ documentary, Strong Style Productions are currently the only people, other than WWE, offering wrestling-related High Definition Blu-Ray releases. And while this is a European exclusive release on Blu-Ray, we are currently working on the US Blu-Ray version for release soon.” – Rob O’Brien (Strong Style Productions Founder)
“Wrestling Memoirs With Doug Basham” is available on both Blu-Ray & DVD exclusively through : www.strongstyleproductions.com