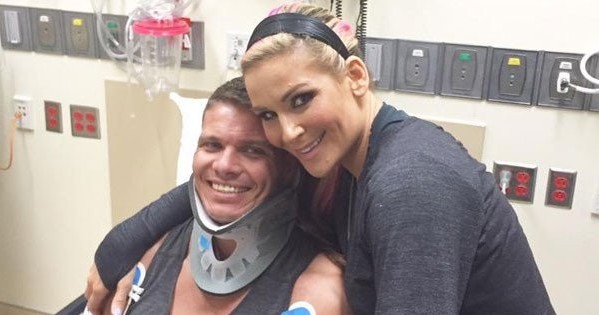 The death of Japanese legend Eiji Ezaki in March was a firm reminder of the sacrifices that are made from professional wrestlers. Known to fans as Hayabusa, in 2001, the wrestler botched a springboard moonsault landing on his head. The inventor of the Phoenix Splash was paralyzed from the waist down and confined to a wheel chair. It wasn’t until 2014 that he showed the world he could stand up with assistance. He died due to a subarachnoid hemorrhage and the tragedy re-hashed feelings of how dangerous the industry can be.

Wrestlers and fans can be symbiotic in many ways. Fans love to be entertained and wrestlers (the ones who care) want to put on a good show. We have seen countless times when a wrestler would go above and beyond to get a reaction from a crowd. For instance, at WrestleMania 32, Shane McMahon offered his body (wasn’t the first time) to the 100,000 fans in attendance and millions watching at home. He threw himself off the 20 foot high Hell in the Cell and landed on an announcers table. It’s possible to think Shane O’Mac could have been eating threw a straw right now because so many things could have gone wrong. Thankfully, the WWE also put a mat under the commentary booth as a precautionary measure.

It’s not just the “big moment spots” like what Shane did, but an injury can take place during the regular routine of a match. The older generations of fans remember when Bruno Sammartino had his neck broken by recent WWE Hall of Fame inductee Stan Hanson. All it takes is a slip up or the apathetic actions of one wrestler to severely injure their colleague. Just like the night when fans witnessed Joey Mercury’s face exploding from a ladder spot. It was purely accidental and will go down as extraordinarily painful. These “spots” on the list can be found floating around the internet but we warn you, they’re graphic.

Japanese legends Toshiaki Kawada and Mitsuharu Misawa were involved in one of the greatest feuds to hit the ‘90s. During a Triple Crown Title Match for All Japan Pro Wrestling in ’99, it looks like Kawada was going to end the match with a powerbomb. Misawa couldn’t lift himself up to land on his back, instead, he landed directly on his head.

The move could be argued that it was intended to be a Ganso Bomb or Kawada Driver. Whether it was a botched powerbomb or an intentional Ganso Bomb, you can feel your own neck snapping when watching the video. In ’09, Misawa would take a belly-to-belly suplex, lose consciousness, and die in a hospital. In respect to the legend, we have to recommend watching Kawada vs Misawa at AJPW Super Power Series on March 3rd, 1994. It’s a magnificent performance and one of best matches of that decade.

14. The Stupidity of Mass Transit

It was pretty much a horror show and one of the biggest F*#@ ups Paul Heyman, the former owner of ECW, has to admit to. At a Boston house show in ’96, Eric Kulas wanted to replace a wrestler for a tag match. He lied to Heyman by telling him he was 23 (he was 17) and was a trained wrestler. Heyman booked him, but the only problem was that New Jack was one of his opponents.

Towards the end, New Jack used a knife on Kulas’ face and cut his arteries in doing so. Kulas passed out from the loss of blood and you can hear his father screaming to stop the match. The wannabe wrestler could have bled out on the floor but luckily received proper medical attention. The Kulas family tried suing New Jack but failed when Mass Transit (the ring name of the minor) admitted to asking New Jack to cut him and lied about his age.

He wasn’t called one of the toughest S.O.B in the business for nothing. Stone Cold Steve Austin’s mud stomping, middle finger raising, beer can chugging character was getting white hot when he faced Owen Hart at SummerSlam ’97. Both guys were very technical and masters of their trade but one mistake would derail Austin’s career for a period.

Owen would botch a piledriver that left Austin with a broken neck and short-term paralysis. You would think the match would be stopped but in Stone Cold fashion, Austin somehow had enough strength to roll-up Owen and win the Intercontinental Championship. The piledriver was a reckless move that later found itself banned from the company.

12. Yoshi Tatsu and the Clash

It’s a move that has already broken the neck of several wrestlers and has been talked about being banned in the WWE. In 2014, Tatsu became another performer who botched A.J. Style’s finisher, The Styles Clash. At a New Japan Pro Wrestling event, Tatsu tucked his head, which you shouldn’t do during The Styles Clash and payed the ultimate sacrifice for it.

It left him with several broken bones in his neck and an 18-month layoff after spinal surgery. To a rounding applause, Tatsu returned to NJPW during Invasion Attack on April 10th, winning the NEVER Openweight 6-Man Tag Team Championship with Michael Elgin and Hiroshi Tanahashi.