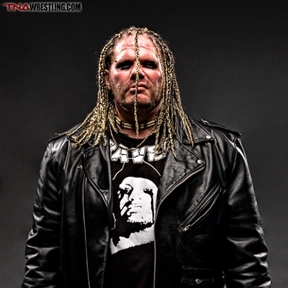 As we inch ever so much closer to this weekend’s weekend of heavy metal and wrestling at the second annual Heavy T.O. music festival at Downsview Park in Toronto, the Apocalypse Wrestling Federation and Live Nation Canada are pleased to announce that former Extreme Championship Wrestling star RAVEN will appear live on the afternoon drive show of TSN RADIO 1050 to chat with radio host James Cybulski on Cybulski & Company, tomorrow, Thursday Aug. 9 at 6:30 PM.

TSN Radio 1050 can be tuned in on the AM dial by sports fans in the Toronto area and/or can be listened to online at www.tsn.ca/toronto/listen/

Raven and wrestling stars such as RHINO, TOMMY DREAMER, JOHNNY SWINGER, JOE E. LEGEND and the stars of Toronto’s Apocalypse Wrestling Federation will be sharing the weekend billing with heavy metal icons such as Slipknot, Marilyn Manson, System of a Down, Lamb of God and dozens of other bands as part of the weekend long Heavy T.O. festival this Saturday and Sunday Aug. 11 and 12.

Please be sure to visit the official site of the Apocalypse Wrestling Federation at www.AWFaction.com and/or ‘like’ us on Facebook at www.facebook.com/awf.wrestling.