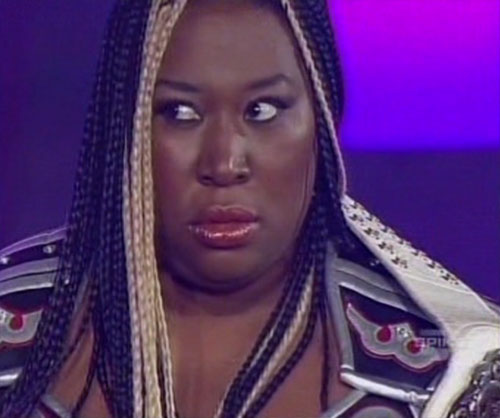 (New York) – September 2010 has been a great month so far for WSU World Champion Mercedes Martinez. Martinez, the greatest women’s wrestler in the world today, continued to show why she’s one of the best last night at EVOLVE, in a match part of WSU’s “On The Road” DVD series. Several days before this match took place, Martinez was ranked #3 in Pro Wrestling Illustrated’s “Top 50 Females of Wrestling”. This has always been a list compiled mostly of WWE & TNA women. Mercedes Martinez broke another barrier in women’s wrestling, and was the highest ranked independent wrestler on the list. While WSU fans understand that WWE & TNA women can not be ignored, many fans are saying that Martinez should have been number 1. However, fans will be happy to know that Martinez has dominated PWI’s weekly & monthly rankings at the number 1 spot, and is currently ranked number 1 in the world by PWI magazine.

Being the best women’s wrestler in the world and defending the biggest prize in womens wrestling today has been no easy feat for Martinez. In over an 18 month title reign, Martinez has had to turn back the challenges of the likes of Mickie James, Angel Orsini, Portia Perez, Hailey Hatred, Rain, Alicia, Angelina Love, Nikki Roxx, Brittney Savage, Melissa Coates, Amber O’Neal, Bombshell Bo & countless others. Martinez is the biggest target in womens wrestling today because she holds the most prestigious championship in all of womens wrestling today – the WSU World Championship, the most defended women’s championship in the United States today. It is easy to have long title reigns when champions are inactive, but in 18 months, Martinez has defended the World Championship a record 30 times, averaging almost 2 title matches a month during this span!

As part of WSU’s working relationship with Dragongate USA, Mercedes Martinez joined EVOLVE wrestling and quickly compiled a 4-0 record, defeating Niya, Sumie Sakai, Brittney Savage & Tina San Antonio. However, after each match, Martinez kept asking for more competition. She begged for the best. On 9/11/10, she got it, in the form of “Awesome” Amazing Kong. If Martinez was to defeat Kong, Martinez would’ve successfully defended the championship for the 30th time.

During the highly anticipated bout last night at the Rawhay Rec Center during EVOLVE’s fifth event, the WSU World Champion would find herself opposite side of a beast hellbent on causing destruction. Kong, the former All Japan Women’s Pro-Wrestling Champion & former TNA Women’s Champion showed immediate dominance by tossing Martinez around and knocking the ‘Latina Sensation’ off her feet. In fact, Martinez was banged around pretty good during the opening minutes of the contest. She would eventually find an offensive however, utilizing devastating kicks and strikes while using her weight to tumble Kong, who outweighed the champion by 127 pounds.

Several times during the contest, Kong needed to be warned by official Michael Kehner for her vicious tactics-some of which included attempting to remove the corner turnbuckle padding, and repeatedly refusing to release illegal holds on Martinez. After tiring of Kehner’s admonishments, Kong attempted to hook the senior official into her patented Impact Buster, which would cost her a disqualification loss. Infuriated, Kong attacked Martinez and went for her finisher, however Martinez would reverse the movement to catch Kong in an X Factor. The pair would brawl back to the dressing room.

WSUWrestling.com tried to get comments from both of the wrestlers after the match. An agent, on behalf of Kong told WSU that Kong did not realize the rules of the match, as most WSU World Title matches are truly “Uncensored”. However, WSU always respects the promotions they work with. WSU officials upon seeing the match agreed that Ref Mike Kehner made the right decision, as there is no place in wrestling for attacking referees. WSU understands why Kong thought the match would be anything-goes as most WSU World Title matches have been conducted that way, including a previous WSU World Title match between Kong & Martinez on 12/12. Kong got caught up in the heat of the moment and it cost her.

The WSU World Champion Mercedes Martinez allowed WSUWrestling.com to get an exclusive video with her, where Martinez talks about Awesome Kong, Jazz, Angel Orsini, PWI Magazine, Being The Greatest Women’s Wrestler Defending The Biggest Prize in Women’s Wrestling & Much More. Here is this exclusive video:

WSU urges all fans to sign up and join our facebook page at Facebook.com/WSUWrestling
WSU constantly updates our facebook page and listens to all our fans that connect with us there. It is a great tool for fans to stay up-to-date and up-to-the-minute with WSU.

For fans looking for photos of this Martinez/Kong showdown, check out the WSU Message Board, another great place to interact with WSU fans. The pics are at this link: http://www.declarationofindependents.net/forum2/viewtopic.php?f=4&t=18681

WSU will be announcing our full 11/6 line-up later this week.

WSU would also like to congratulate Martinez on all her recent success. On a side note, WSU would also like to thank Amazing Kong for going through with this match as planned, as Kong is battling several injuries. However, the WSU World Title meant so much to her, that despite a bad back, Kong gave it everything she had against the best in the world today. WSU has agreed to give Kong a rematch down the line.

For more on WSU, visit WSUWrestling.com. Also check out WSU DVDs at WSUVideo.com. You can also watch our weekly TV show at Inasectv.com. Here is the latest episode:

Thank you for reading this press release.