Home / WWE / WWE and DK Publishing combine to publish the definitive guide to the WWE!

WWE and DK Publishing combine to publish the definitive guide to the WWE! 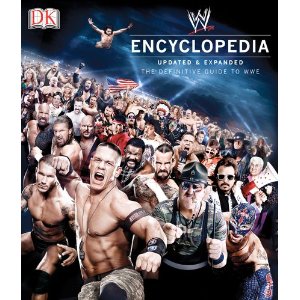 David Dexter reports that DK Publishing is pleased to reveal WWE Encyclopedia: Updated & Expanded. The all-encompassing resource for everything WWE has returned, packed with over 50 years of history including title history details on all your favorite Superstars and Divas, from the heroes of today to the legendary figures who blazed their trails, supported by imagery from the vast archives of WWE and Pro Wrestling Illustrated.

Updated and expanded, the new WWE Encyclopedia is even more comprehensive than the original, overflowing with profiles, photos, fact, statistics and much more. An illustrious lineage of stars including John Cena®, CM Punk®, Stone Cold Steve Austin®, Bret “Hit Man” Hart®, “Rowdy” Roddy Piper™, Bruno Sammartino and many more are brought together in one volume for the WWE Universe to own.

Whether you are a proud member of Cenation®, the DX® Army, or one of Bobby Heenan™’s original humanoids, this resource is a must-have addition for all WWE fans and an invaluable source of information for all generations who enjoy WWE’s brand of entertainment!

· Hundreds of Superstars of all eras, from the territorial days of the 60s and 70s to today’s WWE!

· The great partnerships, tag teams and stables throughout WWE history.

· The history of all championships, from the WWE and Intercontinental Championship to defunct titles such as the Hardcore and European Championships.

· Coverage of the television shows that put the WWE into millions of households.

· WWE’s showcase events, the pay-per-views from Survivor Series® to the grand spectacle of WrestleMania®.

· How the WWE’s ventures outside the ring with toy lines, movies, music, and more!

Brian Shields work with the WWE dates back to 1998. After marketing WWE video games, Brian helped create the Legends Program. He co-authored the New York Times bestselling WWE Encyclopedia: The Definitive Guide To World Wrestling Entertainment. Founder of Mighty Pen & Sword, LLC, Brian most recently partnered with WWE licensees Mattel, THQ, and Game On. Brian lectures throughout the United States and writes comedy at the Friars Club in New York City where he enjoys membership.

Kevin Sullivan is a graduate of Fairfield University in Connecticut, just a few miles north of WWE’s Stamford headquarters. In 1998, Sullivan began a decade-long career with both WWE.com and WWE Magazine. In 2008, he left his daily WWE responsibilities, but still works with the worldwide leader in sports-entertainment as an author of nine WWE books. Follow Sullivan on Twitter: @SullivanBooks

WWE, a publicly traded company (NYSE: WWE), is an integrated media organization and recognized leader in global entertainment. The company consists of a portfolio of businesses that create and deliver original content 52 weeks a year to a global audience. WWE is committed to family-friendly entertainment on its television programming, pay-per-view, digital media and publishing platforms. WWE programming is broadcast in more than 145 countries and 30 languages and reaches more than 600 million homes worldwide. The company is headquartered in Stamford, Conn., with offices in New York, Los Angeles, Miami, London, Mumbai, Shanghai, Singapore, Istanbul and Tokyo.

DK Publishing is the New York Times bestselling publisher known for its distinctive, highly visual books, ebooks and apps that inform, inspire and entertain readers of all ages. DK also publishes the award-winning Eyewitness series for children and Eyewitness Travel Guides. BradyGames and Rough Guides are also available from DK, a division of Penguin Group. http://us.dk.com/