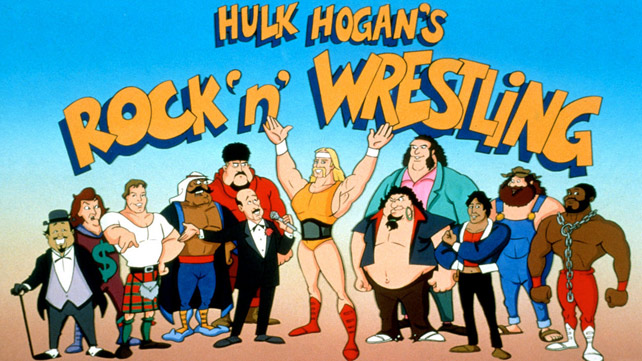 It was the days of The California Raisins, Teddy Ruxpin and New Coke. In 1985, Hulkamania was running wild in WWE, WrestleMania had been a smash success and Cyndi Lauper’s involvement in the so-called “Rock ‘n’ Wrestling Connection” had brought sports-entertainment into the mainstream of the MTV generation. WWE was everywhere, including CBS, where Hulk Hogan and the gang were the stars of their own Saturday morning cartoon show.

Across two seasons and 26 episodes, “Hulk Hogan’s Rock ‘n’ Wrestling” helped establish WWE as an indelible piece of 1980s pop culture.Week in and week out, The Hulkster — along with future WWE Hall of Famers like Andre the Giant, The Iron Sheik and “Mean” Gene Okerlund — found himself caught up in the type of wacky capers usually seen on cartoons like “Care Bears” and “The Real Ghostbusters.” And it was awesome.

But how did a posse of WWE Superstars become animated heroes and villains for a generation of kids raised on Frankenberry and Jolt Cola? WWEClassics.com spoke to the producers, actors and Superstars responsible to discover the amazing story behind one of wrestling’s most beloved relics.

WWECLASSICS.COM: Gene, you were featured frequently on the show. How did you first hear about it?

ANDY HEYWARD: It was 1983 or 1984. I was a big wrestling fan and went often to the various events. I thought the wrestlers were basically cartoon characters, they just happened to be live and real. All of those characters were so colorful. Not just Hulk — Iron Sheik, “Rowdy” Roddy Piper, Hillbilly Jim, The Fabulous Moolah, the list goes on. I contacted Vince and proposed the idea of turning this into a cartoon series around Hulk. They liked the idea and we went ahead.

WWECLASSICS.COM: What was more important in developing the show: Your knowledge as a wrestling fan or your background in cartoons?

HEYWARD: By all means, it was both. In addition, I was in constant dialogue with Vince [McMahon], who was the creative force behind everything going on. He had a lot of input and ideas on how these storyline arcs would unravel. And which characters would be the most colorful to emphasize.

WWECLASSICS.COM: How did you determine which WWE Superstars would be used in the cartoon?

HEYWARD: We wanted the ones that we thought had the most entertainment value in them. There was Big John Studd, there was Junkyard Dog. He was fantastic. We even had Captain Lou Albano.

WWECLASSICS.COM: Brad, how did you score the opportunity to be the voice of Hulk Hogan?

BRAD GARRETT: I auditioned for it. I started doing voiceovers in 1982. I was known for my deeper pipes and someone heard me doing a Hulk impression during an audition. There were some amazing new voiceover guys who were in it, like Pat Fraley [Hillbilly Jim] and Ron Feinberg [Andre the Giant]. These are the guys who became some of my voiceover mentors. [Uncle Phil] from “Fresh Prince,” James Avery, was Junkyard Dog. We recorded out in Burbank and it was a fun, fun, fun group.

View a gallery of the cartoon here:

Related Itemshulk hoganrock and wrestlingwwe
← Previous Story CLASSIC MATCH: Rock and Roll Express vs. British Bulldogs from the AWA
Next Story → AS I SEE IT – SummerSlam Preview