WWE.com presents: “Paul Heyman on Shane Douglas and the birth of Extreme” 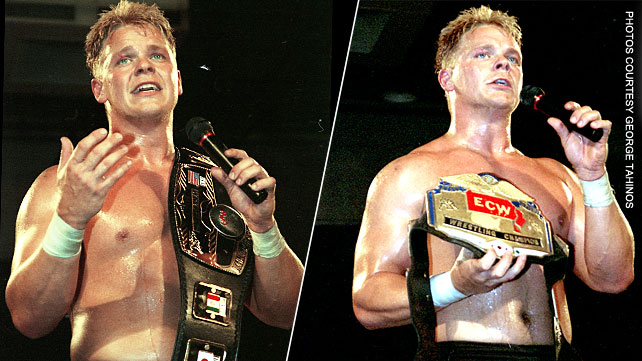 Nearly two decades ago on a muggy summer night, 1,000 wrestling fans packed into a bingo hall in a grungy Philadelphia neighborhood to witness history. After WCW withdrew from the National Wrestling Alliance, the NWA had been left without a World Champion. A young and exciting northeast-based organization called Eastern Championship Wrestling was selected to carry the torch of the NWA and steward the title. On that evening in Philly, an eight-man tournament was held to crown a new NWA World Heavyweight Champion. The action unfolded as normally as most sports-entertainment encounters, but after Shane Douglas was victorious in the finals, nobody could have predicted what happened next.

With the NWA Title on his shoulder and a microphone in his hand, The Franchise paid tribute to former champions like Dusty Rhodes, Harley Race and Ric Flair before committing the ultimate blasphemy by tossing his newly won championship – and 46 years of history – down to the mat. “I am not the man who accepts a torch to be handed down to me from an organization that died – R.I.P. – seven years ago,” Douglas proclaimed, referring to Ted Turner’s purchase of Jim Crockett Promotions. Instead, Douglas called himself “the man who ignites the new flame of the sport of professional wrestling.” He announced that he was the ECW Heavyweight Champion of the World, with the “E” switching from Eastern to Extreme.

In an in-depth and revealing conversation, we spoke with Paul Heyman about one of the most controversial incidents to ever occur at any sports-entertainment event. How was it orchestrated? Who knew about it? And why are there still rumors about ulterior motives? The speech had a ripple effect throughout the entire wrestling world and the battle lines were drawn. The era of Extreme had only just begun.

WWECLASSICS.COM: What was the local wrestling landscape in Philadelphia and the northeast before ECW?

PAUL HEYMAN: Before the existence of ECW, Joel Goodhart had an independent promotion in Philadelphia called Tri-State Wrestling. Much like any other independent promotion that was running, especially in the northeast, the whole concept of Tri-State was to bring in guys who were fresh off WWE, WCW or AWA television – big name national or international stars working for a non-affiliated promoter. Usually, guys freshly fired, freshly quit or in between promotions, would come in for one-nighters. Eddie Gilbert, who was fresh out of WCW, and Cactus Jack, who wasn’t getting full time work in WCW, had a tremendous series of matches in Tri-State. Like all of these promotions, there was no way Joel Goodhart could cover the expense of flying all of these major names in and paying them their one-night fees. So, Tri-State went out of business.

WWECLASSICS.COM: What kept local wrestling alive in that area after Tri-State closed?

HEYMAN: One of the investors in Tri-State was a pawn shop-slash-jewelry store owner in Philadelphia named Tod Gordon. Tod continued on the concept of bringing in big names like Jimmy Snuka, Don Muraco, Jim Neidhart, Terry Funk, Stan Hansen, Abdullah the Butcher, Kevin Sullivan, Ivan Koloff – you name it – and started running shows in 1992 at some local Philadelphia-area bars, then at Cabrini College, and hired Eddie Gilbert as his lead producer of television. Gordon was running small shows using big names and he got into a conflict  with an NWA-affiliated promoter in New Jersey, because they started running events on the same evenings and were trying to schedule some of the same performers. At that time, the National Wrestling Alliance did not have one promoter with a television outlet.