Home / WWE / WWE.com presents the evolution of the steel cage

WWE.com presents the evolution of the steel cage 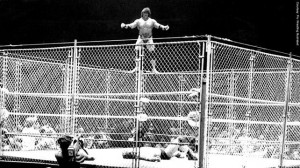 There are few contests in WWE that are more treacherous than those held within the confines of a steel cage. For more than 50 years, the steel cage was a domain where rivalries were put to rest, whether it was Bruno Sammartino battling his arch nemesis Ivan Koloff in 1975, or Magnum T.A.’s historic victory over Tully Blanchard in a Steel Cage “I Quit” Match in 1985, scores were settled definitively.

The match type dates back to the 1930s with variations ranging from a relatively small — by today’s standards — 6-foot-high cage to a structure made of chicken wire. In 1982, however, WWE Hall of Famer Jimmy “Superfly” Snuka changed the landscape of sports-entertainment and jumpstarted the continuing evolution of the steel cage. During a battle with his nemesis, Don Muraco, Snuka ascended the steel cage and leaped from the top to the delight of the awe-stuck inside the WWE Universe.

Following that legendary moment, the Steel Cage Match began to change. Superstars looked at it as more than just an unforgiving structure and variations beyond the height of the four walls confining the squared circle began to take shape. WWE Classics examines eight of the most prominent variations of the cage and how they took on a life of their own.

What is your favorite incarnation of the steel cage?