Home / Womens Wrestling / WWE Diva Emma talks about making it to the main roster, the Performance Center, and more

WWE Diva Emma talks about making it to the main roster, the Performance Center, and more 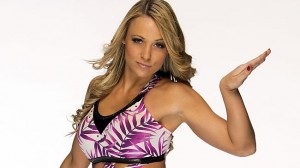 THE purple spotlights flare, the techno beat pulses and the audience rises to its feet.

She emerges out of a cloud of soap bubbles, stomping her feet in time with the music while dancing a jerky, straight-armed movement of her own creation.

Her smile is infectious — the audience, already mimicking her one-of-a-kind dance routine, is swept up in her enthusiasm and chants her name.

She is Emma, sports entertainment superstar, and the adoring masses are all members of her “Emmalution”, poised to take over WWE (World Wrestling Entertainment).

Beneath the character, 24-year-old Melbourne native Tenille Dashwood, 24, lives out the dream she has chased since the age of 13.

“It’s crazy, I feel amazing even though it’s still completely surreal,” she says of her rise through the ranks of professional wrestling.

“I’m very lucky to be able to live the life that’s everything I ever wanted, to have made that possible for myself, and to be actually doing it.”

Tenille in the ring as her character Emma for WWE.

LIKE Emma, I’ve been a fan of wrestling my whole life — and we’re not alone in our devotion. WWE — the company pioneered by US promoter Vince McMahon — broadcasts to 13 million viewers in 145 countries.

Its $659 million annual turnover is set to increase in 2014 with the launch of the WWE Network — a live-streaming 24-hour internet subscription “channel”.

WWE’s dominance is a far cry from the days of Mario Milano and the characters who filled black-and-white TV screens in the 1960s and 1970s.

It’s a success story built on household names likesuch as Hulk Hogan and the Rock, despite steroid and concussion controversies.