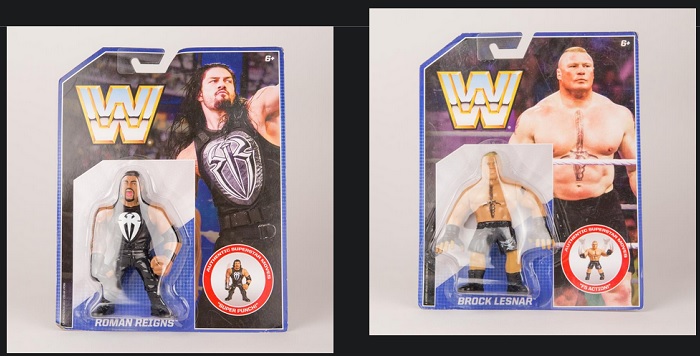 Do you remember old school wrestling figures? They were barely lifelike, and their cheap, plastic bodies could barely be posed. Usually, the WWF figures had one little move they could do. There was a Hulk Hogan who could do a bear hug, and a Mountie who could whomp you with a nightstick. You probably staged fights with them for a while, before you got bored and starting breaking them, and suddenly your Big Boss Man no longer had a head. Well, WWE wants to take you back to those halcyon days with these new retro wrestling figures.

WWE has announced a new Retro Line that will be available in Walmarts across the country in 2017. They are described by WWE as “squat” and “chunky” but that’s perfect for the old school vibe they are going for. Only four current wrestlers are available: John Cena, Brock Lesnar, Kevin Owens, and Roman Reigns. Fans who boo Cena and Reigns and dream of Lesnar beating them up can now make that happen, at least in wrestling figure form. However, on top of that, the packaging indicates that both Ultimate Warrior and The Undertaker are getting figures as well. Finally, you can replace that old Warrior figure you broke 20 years ago. The packaging is pretty cool looking, also. Fans of retro kitsch should be quite pleased with these new figures. Just be more careful with them than your old ones.