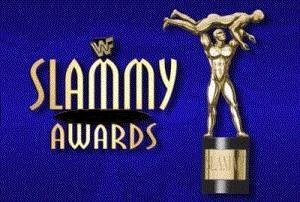 Maybe I’m talking about the masses or the few, every time the Slammy Awards comes around it is a big fun ole event. Now WWE had these for a few years back in the late 90’s but from an award ceremony to a comedy bit after a comedy bit, some have to wonder how things have changed. Now does it bring something different to the show yes. The problem is that it should be something taken seriously. If you look at some of the categories, you have to think why should I care about this? Or why is this even on here?

For example: Insult of the Year, “LOL!” Moments of the Year are just some of what you say to yourself; what the hell are these? Now don’t get me wrong there are some good ones including Extreme, Match & Superstar of the year. Though you could pick apart these categories and argue that this match or this superstar should or shouldn’t be in there.

The Slammy Awards have had some good and really bad years. Since WWE brought the concept back in 2008, things have changed with gimmicks, arenas, booking, ETC from the very first one in 1987. Granted back in 87 that was one of the best years for WWE. Think about it, Hogan vs. Andre was the feud of the year. They worked almost all four big PPV that years and headlined them. Can you have a feud go on for a year now days? No because it’s simple. Today’s age is different than at that time.

Throughout the years, Superstars come and go but they do usually bring back some of the bigger stars: Mick Foley, Shawn Michaels, DX, past champions and other special guest. With speaking of tonight’s show it is the go-home show for a PPV. With the focus not being on the PPV but instead the Slammy Awards I think it takes away from both shows.

Either you have to build the PPV or put everything into the award show. Don’t have do it half ass because if you go into that theory then why even do a show in the first place.

Either way the Slammy Awards have turned into a big joke of late with simply the categories. If you want us the “WWE Universe” to take it seriously then management and creative should as well.