Home / WWE / WWE Superstars That Might Be FIRED Next 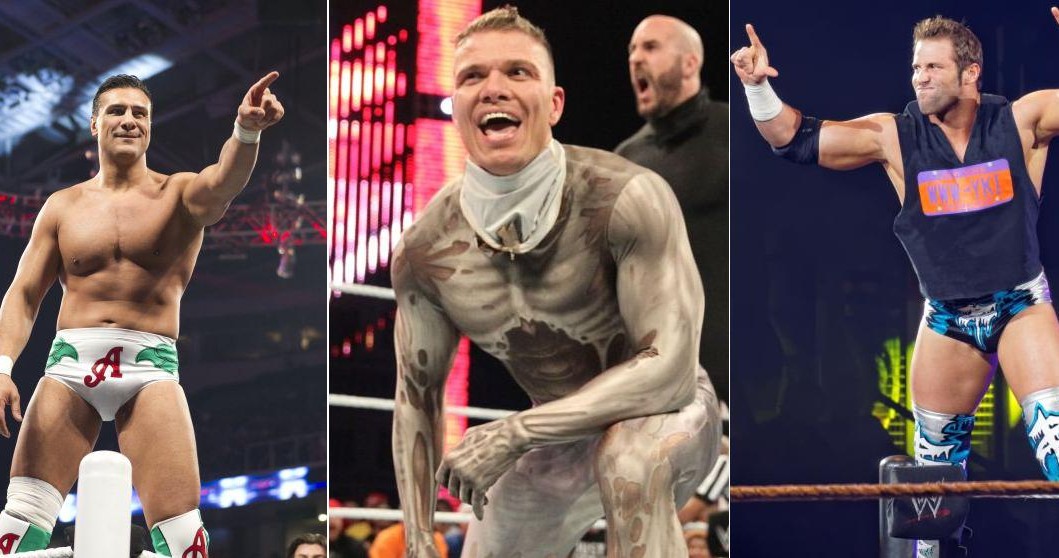 On Friday May 6th, 2016, the WWE released eight individuals from their company. Some of the people released could still have usefulness in the company while others where irrelevant for months, even years up until their careers in the WWE ended. All eight of the individuals had contributed to the WWE in some fashion over the years and as WWE likes to say, we wish them the best in their future endeavors.

With that being said, there are still a lot of WWE superstars who probably could be released later on or next year. Some superstars have seen their potential squandered over the years while others have never been able to capitalize on the opportunities they have been presented with time and time again. Some of these wrestlers would have better chances thriving in other promotions, other wrestlers may not fit the vision that the WWE has, and the rest just might need to venture into other forms of entertainment.

And so this article will be looking at 13 individuals on the roster who are currently employed by the WWE that may be released by the company at some point in the near future. Whether for contract negotiations, unentertaining gimmicks, or just too much heat with the man in charge, the WWE might be looking to get rid of the individuals on this list and it might just work out better for them in the end.

Now before you read any further, I’d like to point out that wrestlers who are synonymous with each other because of tag teams like The Usos and The Dudley Boyz will be listed as a group rather than an individual. However, members of stables like The Wyatt Family and the Social Outcasts will be discussed individually because stables replace their members way more often than tag partners do.

Also, I would like to say that the inclusion of people on this list is not a personal attack on any of the individuals listed, it is just an opinion.

With that out of the way, let’s begin with the 13 WWE Superstars That Might Be FIRED Next!

On paper, it would be a foolish idea to release a multi-time World Champion and a good wrestler like Alberto Del Rio. He’s relatively well-known and has been with the company for years, rarely putting on a bad match. Despite all of this, he’s still not over and that hasn’t changed since he was signed in 2010.

Now when Del Rio was wrestling in Lucha Underground, his matches seemed more interesting and the fans enjoyed it. Unfortunately, when he came back to WWE, he was interesting for a few weeks and ended up right back where he was before he left. Joining the stable, The League of Nations, also did nothing for him as he lost his title during this time and hasn’t done anything of interest since. With WWE signing and bringing up more and more wrestlers who probably will get over, Del Rio seems less and less like a commodity. If he is released, hopefully he can resume his critically acclaimed work in Lucha Underground.

Having been in the WWE since 2006, Heath Slater has been in a number of groups and has had plenty of moments to shine. But at the end of the day, nothing really worked for him.

He was involved in one of the hottest WWE storylines of the PG Era in The Nexus, but when that fell apart he became a member of the spinoff group The Corre. After The Corre disbanded, Slater reached his highest point of relevancy as a singles competitor when he began taking on legends in the weeks leading up to RAW’s 1,000th episode. Once that ended, Slater formed the new job squad called 3MB until his partners were released. Then he teamed with Titus O’Neil for a while and is currently the leader of the Social Outcasts.

His gimmick seems to be going from team to team every couple of years and most of the teams he’s involved with feature Superstars more entertaining than he is. He’s a three-time Tag Champion and has been in WWE for 10 years, so he’s had a good enough career. But all good things must come to an end at some point.

In NXT, The Ascension were a good enough tag team and were relatively well received by the audience. But just like Adam Rose, the group couldn’t cut it when they got to the main roster.

The WWE did air vignettes hyping the debut of the group and they were given promo time for a few weeks, but the fans lost interest as the team seemed like a rip-off of The Legion of Doom. The WWE tried their best to get them over on television by having them cut heel promos about being better than other tag teams and even gave them wins over The New Age Outlaws. Despite this, the fans didn’t seem to care and The Ascension is as irrelevant as they ever were now.

Now perhaps instead of firing the team, the WWE could simply keep them in NXT where the crowd seems to respond to them more, but if the highlights of their careers are teaming up with Stardust, then they might as well get rid of the group.

It’s quite ironic that the WWE had The Ascension team up with Stardust as they all have rip-off gimmicks in common. Where The Ascension rips off the Legion of Doom, Stardust is a rip-off of his brother Goldust. And to be quite honest, it’s a character that WWE can do without.

Now if Stardust were to revert back to being Cody Rhodes then this may be a different story. After all, Rhodes has been involved in entertaining midcard storylines like the group Legacy, the Undashing gimmick, the team with Damien Sandow, and the feud with The Authority. But with this Stardust gimmick going on for so long, it’s easy to forget about what he’s done and focus on what he’s doing currently.

When the gimmick started in 2014, fans somewhat enjoyed it for a while but felt like the character needed to come to an end especially when his father, the late great Dusty Rhodes, passed. This feeling was not shared by Rhodes who has gone on record stating he is honoring his father through this gimmick. And if Rhodes is so committed to a gimmick that clearly isn’t working, then perhaps he should be committed somewhere else.