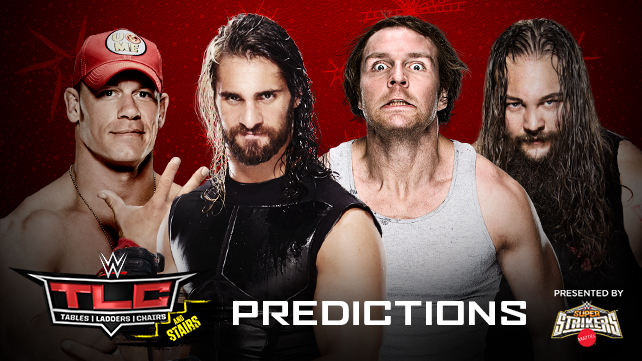 The final pay-per-view of 2014 is almost upon us, and with WWE TLC’s insane lineup, there’s no doubt WWE’s Demolition Derby will be one of the wildest events of the year. Will John Cena still hold on to his No. 1 Contender’s spot after facing Seth Rollins in a Tables Match? And what kind of carnage will be in store when Dean Ambrose fights Bray Wyatt in a Tables, Ladders & Chairs Match?

Before WWE TLC airs live on WWE Network, check out WWE.com’s predictions for this Sunday’s winners and losers. Then, add your own voice to the conversation by leaving your WWE TLC 2014 predictions in the comments section below.

Here are the staff predictions!

@JoeyStyles: I’m not sure what to make of The New Day; matching ring gear doesn’t guarantee success. That said, the WWE Hall of Fame already has four tag teams in it and will have many more in the years to come. Xavier Woods, Kofi Kingston & Big E seem to have created a whole greater than the sum of its parts. With any WWE makeover comes a new sense of optimism and confidence. Conversely, “Dust to Dust” (the name I continue to call Goldust & Stardust) have a less-than-stellar win-loss record since losing the WWE Tag Team Titles. The psychological advantage these brothers may have had upon Stardust’s arrival seems to have worn off. Don’t get me wrong, the face paint and body suits are more entertaining and sell more merchandise than two more guys in tights and boots, but to win back the twin titles, Goldust & Stardust will have to ditch “the cosmic key” shtick and wrestle like purebreds. Unfortunately for this duo, I don’t think they will come to that realization by this Sunday. WINNERS: The New Day

@HowardFinkel: Tensions between The New Day and the former WWE Tag Team Champions ignited quite quickly over this past week, and so the stage is set for their Kickoff Match this Sunday. The New Day has a fresh, crisp feel to them, and they should slip by Gold & Stardust. And if I may: So far we’ve seen Kofi Kingston and Big E primarily in action for New Day, and they’ve both looked better than ever!  But I’m now interested to see if Xavier Woods, who last fought on the Dec. 5 SmackDown, will partake in the tag match on Sunday, representing his group. Only time will tell. WINNERS: The New Day

James Wortman: The sun has just begun to rise for The New Day, a group comprised of three reinvented Superstars using the power of positive thinking to turn heads in a major way in WWE. Gold & Stardust, meanwhile, seem to view this emerging faction as a threat, especially after Kofi Kingston defeated Stardust this past week on Raw. That singles victory was a mere preview of the triumph on the horizon for The New Day in their biggest match yet as a unit. WINNERS: The New Day

Scott Taylor: Look up “synergy” in the dictionary and you may just see a picture of The New Day. Xavier Woods, Kofi Kingston & Big E were each impressive young Superstars in their own right, but as a group, the sky’s the limit for this spirited trio. Gold & Stardust have experience on their side, but when working together, The New Day look like a force to be reckoned with. WINNERS: The New Day

John Clapp: The New Day’s looking to make noise and can’t afford a setback at this stage, but I believe Gold & Stardust are motivated to reassert themselves. Don’t be shocked if the face-painted brothers take their sinister behavior to new depths at WWE TLC, much to the detriment of The New Day. WINNERS: Gold & Stardust