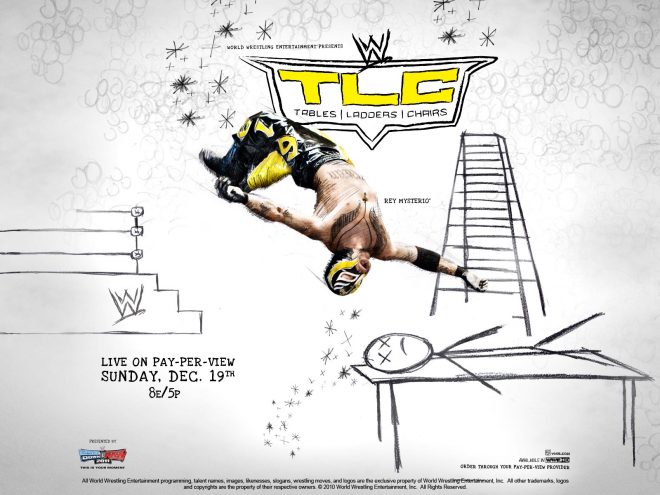 With this years PPV only a matter of days away i’m going down the list and reviewing the past PPV. Each articles will be a different year, also to see what was good and what was bad.

TLC 2010
This PPV once again focused on the young and upcoming superstar in Wade Barrett. This of course was the year of the Nexus who stole the summer in their take over / feud with WWE management. He took on the the face of the WWE in John Cena. Also on the card was a forgettable WWE title match with the Miz taking on Randy Orton. The under card was also forgettable. Hell this hole PPV was forgettable but the fact is its review time!

We kick things off with a triple threat Intercontinental Title match with Dolph Ziggler © Defeating Kofi Kingston and Jack Swagger in a Ladder match.
This is no doubt about that this was a spot match but to a PPV built around this kind of gimmick it needed it. You had Ziggler who was the man for the title at the time and they needed someone to plug in against him. One of the better ladder matches that you will see in WWE.

The Divas Tag Team Table match and the Tag Team Title matches were just filler. At the time the Tag Team division was a joke and had no meaning. The Divas match was a different from the norm and while the women gave good effort never stood out. Especially following a match before it.

#1 Contender Ladder Match For WWE Title: John Morrison Def. King Sheamus
Before we get into this Lets remember that The Miz was champion at this time so the title was not was it usually is. The King Sheamus gimmick never got over and to have an Irish guy as a king was just laughable. Morrison has always been a guy that WWE management thought could be something but never matched up to the “Top Guy” role they wanted him to be.

WWE Title Match: The Miz © Defeats Randy Orton
Prior to this The Miz cashed in his MITB briefcase and won the title. This was an okay match but honestly you couldn’t take The Miz seriously at this time. Orton was trying to refined his character. At the time the WWE title  was not the main focus point of the WWE. This was honestly a forgettable match and feud.

Four Way TLC Match For The World Heavyweight Championship: Edge © Def. Kane, Rey Mysterio & Alberto Del Rio
This was a fun match to watch and really it was time for Kane to lose the belt. He had his reign which was OK with a stupid storyline with the Undertaker. Del Rio was really coming into his own at this time and hadn’t proven himself as a title contender in my opinion. His feud with Mysterio i think go him into this match.

John Cena Def. Wade Barrett in a Chairs Match.
This really was the blow off with both guys, of course this was the year of the Nexus storyline and then they made Cena their B*tch. Cena got his revenge in this one and went on his marry way. Wade never rebounded since the Nexus and honestly looks lost. They have repacked him several times but nothing got him as over then when he was the top heel in the summer of this year.