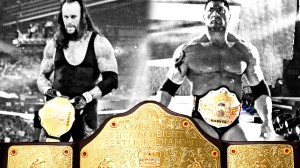 The title affectionately called the “Big Gold Championship” made its official WWE debut 10 years ago in September 2002, but its true lineage dates to the formation of the National Wrestling Alliance in 1948. Hoping to raise its prestige, the young organization named an NWA World Heavyweight Champion to reign over its member territories. By the 1980s, the title became synonymous with the NWA’s largest territory, Jim Crockett Promotions. When JCP morphed into WCW after Ted Turner purchased the company in 1988, the NWA World Heavyweight Championship likewise transformed into the WCW Championship.

In celebration of the title’s 10-year anniversary with WWE, WWE.com ranks the 15 best champions to claim the World Heavyweight Title in WWE.