Yahoo! Sports presents: ‘The sad tragedy of The Iron Sheik’ 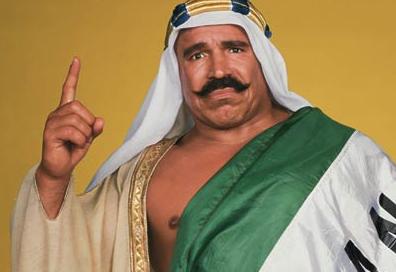 His voice was instantly recognizable, like that of a long lost friend. But it was a joyless voice, and sounded a bit feeble.

Hossein Khosrow Ali Vaziri, is 73, and is in pain. He badly needs knee surgery that he can’t afford, but if the truth is to be told, every joint on his body could use fixing.

A lifetime in wrestling, amateur and professional, will do that to a man.

So Vaziri, better known as the evil pro wrestler, The Iron Sheik, would on this day rather sit in his chair and let the hours pass by than talk about his life.

He aches all over, he’s not making a lot of money and he wants to be left alone.

“Bubba, please, I will talk to you and answer all of your questions,” he says, pleadingly. “But let’s do it another time. Now is not good.”

Now, though, is the time. At least that’s the view of Page Magen, who along with his twin brother, Jian, serves as the Sheik’s manager. The Magens are attempting to raise funds through crowd sourcing to produce a documentary on the Sheik’s life.

It is an incredible life, one well worth documenting. He was born in a small village near Tehran. His childhood home had no running water nor plumbing, but he worked hard and became one of Iran’s most popular athletes. He competed in the 1968 Olympics in Mexico City on its Greco-Roman wrestling team, and served for a while as a bodyguard for the family of the Shah.

He fled the country, though, when his friend and idol Gholamreza Takhti was, he believed, murdered by the government. He feared he might be next, so in 1969, he headed for the safety of the U.S.

The official version of Takhti’s death, released by the government, is that he committed suicide. But Vaziri and many others believe Takhti was executed for his anti-government views.

“He was so popular in Iran,” Vaziri said. “He was like the Michael Jordan. Everyone loved him. And I was No. 2. I thought, if they got him, they’re probably going to get me, too. I knew I had to leave.”

And so he set out for the U.S. Though he spoke only Farsi when he arrived, he quickly became immersed in amateur wrestling in his new country. He won an AAU championship in 1971 and was presented his gold medal by Muhammad Ali.

Later, he served as an assistant coach under the legendary Alan Rice on the 1972 U.S. Olympic wrestling team before he went on to stardom as a villainous professional wrestler.

But he became addicted to crack cocaine during his wrestling career, then suffered through the 2003 murder of his oldest daughter, Marissa.

Page Magen knows that for Vaziri to raise the money he needs for the documentary, he has to tell the story of his life to drum up interest in the project, so he patiently prods Vaziri.

“Sheikie baby, listen to me,” Magen says, gently. “You need to focus. This is important. Can you do this for me, Sheikie? Just focus for a few minutes.”

Vaziri agrees, but he speaks slowly, in a monotone and without passion.

Later, his wife, Caryl, says she’s not surprised. It was not a good day, for the Iron Sheik, she says.

“He’s in such great pain, almost all the time,” Caryl Vaziri said.

The Sheik walks with the aid of a cane, but even with the cane, he moves slowly, unsteadily, and with great difficulty.

“He’s such a big, strong guy, and he hurts so much, it hurts me to see him,” she said. “He had operations on both of his knees about 10 years ago, and they failed. He hurts everywhere, but the knees are really painful. He told me, ‘Caryl, I hurt from the top of my head to the bottom of my toes.’ It breaks my heart. He can withstand a lot of pain, but this is too much for him.”

His left knee is particularly painful, and gruesome looking. A bone protrudes out. The bones, Caryl Vaziri said, are out of alignment and “don’t come together.” It makes it torture to walk.

He loved his job, and wouldn’t trade his years as a pro wrestler for anything. He won the WWF (now WWE) world championship on the night after Christmas in 1983 when he beat Bob Backlund. He then went on to have a lengthy feud with Hulk Hogan. He might have become the greatest heel – pro wrestling parlance for a bad guy – in the sport’s long history.

But being a pro wrestler means days and weeks on end on the road, away from family and friends. Addictions are common. And though the results of a pro wrestling match are predetermined, that does not mean it’s not physically taxing.

“Being a wrestler is not an easy life,” he says. “It’s very hard on the body. I loved it, but it is a hard life to live.”

Josip Peruzovic is now 66, and lives in Baltimore. He used to work for the city doing code enforcement, but now works for the Police Department with its kids programs.

During his younger days, Peruzovic was known as Nikolai Volkoff, and teamed with the Iron Sheik to win the WWF tag team titles.

Volkoff and the Sheik played off the anti-Soviet, anti-Iranian mindset that was prevalent in the U.S. in the late 1970s and through the 1980s.

The Iron Sheik would routinely grab the microphone from the ring announcer and shout to an enraged crowd, “Iran, No. 1! Russia, No. 1!”

At that point, he’d say “USA!” and then spit on the ground. Volkoff would then take the microphone and sing the Russian national anthem as the crowd booed mercilessly.

Peruzovic recalled his time as Vaziri’s tag team partner fondly, and said Vaziri was great to work with. Vaziri, he said, loved the fans, particularly children, and would sign autographs for them for so long, he’d miss his plane.

But it wasn’t long after they teamed up that Peruzovic began to worry about his friend.

Vaziri was becoming addicted to alcohol and crack cocaine, and Peruzovic feared for his safety.

“My God, I think at one time, more than 90 percent of the wrestlers were taking one drug or another,” Peruzovic said. “I was fortunate that I never got mixed up in that. I don’t drink, and I don’t smoke and I never was fooling around with drugs. I thank God for that. But I know that the Sheik had a lot of problems with it.

“I’d say to him sometimes, ‘Man, you have to be careful, and be good to your body. You’re going to kill yourself.’ He’s a beautiful person with a big heart, but he didn’t listen to me. He loved those drugs.”

Caryl Vaziri said that when she met her husband in Minnesota in 1971, he didn’t drink, smoke or fool with drugs. But once he hit the big-time and was traveling more than 300 days a year, the peer pressure on him was intense.

“It was horrible,” she said. “It just got so bad, and it puts such a strain on your family and your relationship and everything. It’s bad enough that he was gone on the road so much, but to know what he was doing to himself, it was very painful for the whole family.”

On Oct. 7, 2005, a little more than two years after his oldest daughter was murdered, Vaziri was arrested near his Georgia home and charged with two counts of possession of cocaine and one count of possession of marijuana.

Not long after, Caryl Vaziri had had enough and left him.

“I never stopped loving him,” she said. “Never, not for one minute. But I just had to get him to stop [using drugs]. [Me leaving] and getting my own place shook him up and straightened him out and he has been clean the last couple of years, three or four years now.”

Several years ago when the Magens started working on the documentary, Vaziri came to Toronto where they live to make an appearance at a baseball card show.

Vaziri took a cocktail of drugs and fell into a drug- and alcohol-induced stupor. The promoter who’d brought him to Toronto dumped Vaziri on the Magens.

Page and Jian picked him up and tried to bring him to the airport for his flight to Georgia.

“But someone had just given him a pile of drugs, and he was crazy, out of control, and was completely wanting more,” Jian Magen said. “He didn’t want to leave. We were fighting with him, but he wound up missing his flight.”

They put him into a hotel and booked him on another flight. Vaziri was getting out of control and someone from the hotel phoned the Magens to come do something about him.

Vaziri wound up having a mild heart attack that night.

“The doctor told us, ‘You know, he’s pretty fortunate that whatever happened, happened, ‘ ” Jian Magen said. “If he had gotten on that plane, he’d almost for certain have had a full heart attack and who knows what would have happened. So he was here for about four or five more days and, in a way, he was detoxed. And honestly, he’s been pretty straight since.

“He’ll buzz a beer here or there, but he’s been clean for the most part since that time.”

Some of Vaziri’s later drug use was probably as a result of depression about the May 3, 2003, murder of his 27-year-old daughter, Marissa Jeanne Vaziri.

Charles Warren Reynolds, her boyfriend of several weeks, was arrested and later convicted for strangling her to death.

Caryl Vaziri said she believed her daughter was breaking up with Reynolds, which is why she thinks he killed her.

Hossein Vaziri was crushed by his daughter’s death.

“That was just the worst year of our lives,” she said. “He’d just had his knee surgeries, and had just gotten out of the hospital, when Marissa was murdered. It was devastating. No parent expects to bury their child. It tore us apart.

“[Vaziri] was distraught because he couldn’t do anything to help her. He was this big strong guy that everyone had relied on for so long. And in this situation, there was nothing he could do to save her. It devastated him that he couldn’t have been there and tried to save her.”

At his peak as a wrestler in the early-to-mid 1980s, Vaziri was earning as much as $500,000 a year. But the travel was incredibly difficult, he had to pay all of his own expenses and there were crazy quirks to his job.

His gimmick as an Iranian bad guy raised passions among the audience who attended the wrestling matches. Vaziri forbade his family from traveling with him for fear someone would hurt them.

At several stops, fans came out of the stands and attempted to stab or assault him. Several times, he was stabbed, though only in the upper arm.

But the family car had its windshield broken, its tires slashed and sugar put into the gas tank.

Vaziri sighs and said he was never all that concerned for his safety, though he said it was another example of the difficulty of life as a wrestler.

“I love wrestling and I would do it all again,” he says. “But it is a very, very hard business. There is nothing about it that is easy.”