Home / Behind the Scenes / Young Wrestling Fan Loses His Battle 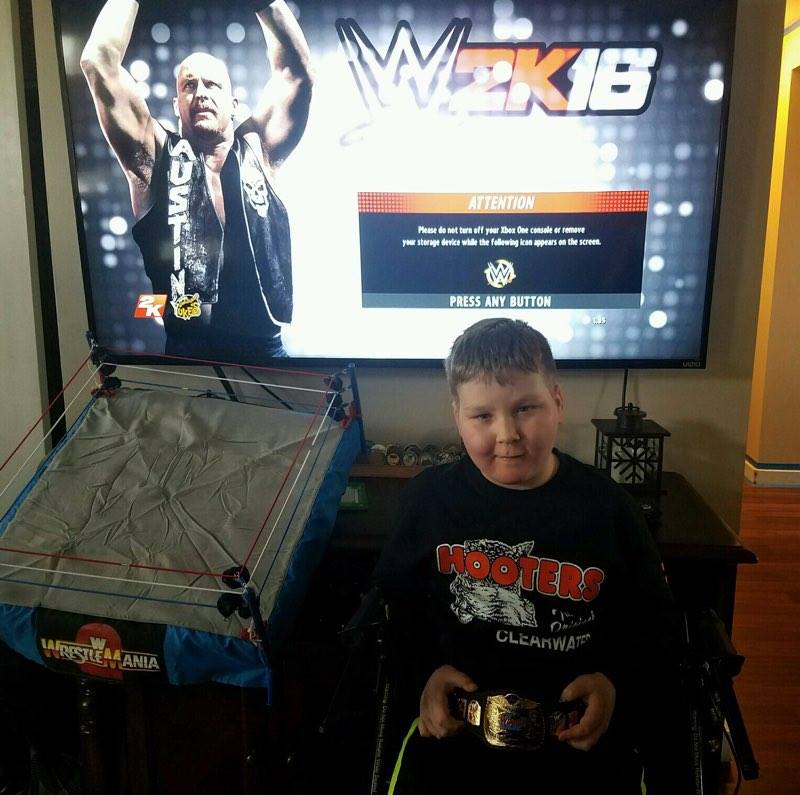 Editor’s note:  I am originally from York, PA, so when Ayden’s story became national news and I heard he was a wrestling fan, I donated wrestling toys and gifts on behalf of the Cauliflower Alley Club.  He is pictured with some of them here.  In addition, the WWE reached out and Ayden spoke with Triple H and other WWE Superstars.  Thanks to the WWE for trying to help this little boy as well.  Personal friends of mine told me he was a good young man.  RIP Ayden.

Courtesy of the York Daily Record:  The boy’s family knew it was coming, the day his heart would stop beating.  They’d known since August, when he was diagnosed with a rare childhood cancer at 9 years old. Doctors said he had eight to 12 months to live.  He didn’t even make it eight months.

Ayden Zeigler-Kohler died Wednesday in his Springettsbury Township home, surrounded by people who loved him. He was 10.

The final months of Ayden’s short life were filled with adventures. His father, Bill Kohler, made sure of that.  Between doctor’s appointments, chemotherapy and MRIs, they tried to fit a full life into a few months.  After they shared their story in February, people from around the world reached out, offering to help them make lasting memories.  Friends and complete strangers raised nearly $90,000 in the last month to help cover costs.  He went on hunting and fishing trips, spending hours with his family outside — one of his favorite places.

Ayden, who could no longer walk, clung to his father’s back on the way to visit bear cubs in the woods. They nuzzled his cheeks and curled up in his lap, a moment set up by the Pennsylvania Game Commission.

Duff Goldman from “Ace of Cakes” and Guy Fieri, a restaurant owner and  TV personality, called to talk to Ayden.

And on Sunday, he went backstage at a WWE match to meet some of his professional wrestling heroes.  This weekend, they were supposed to see the Harlem Globetrotters, a trick basketball team.