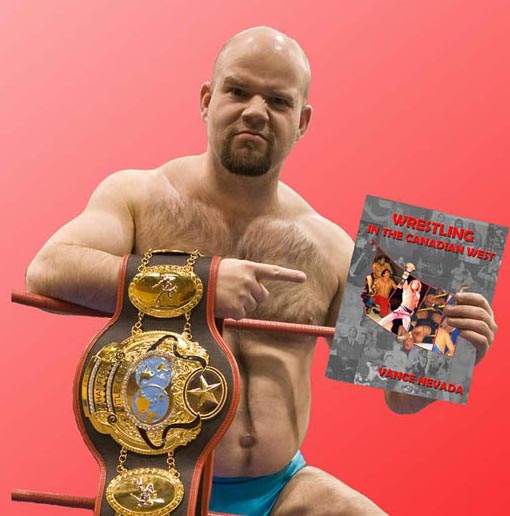 Canadian professional wrestler Vance Nevada has maintained one of the most aggressive schedules on the independent wrestling scene.  Having just reached the 1,300 match milestone in his seventeen year career, his upcoming schedule sees him in rings from coast to coast in Canada over the coming month.

However, his in-ring success pales in comparison to the body of work that he has done beyond the glare of the ring lights.  For more than fifteen years, Nevada has been working to preserve the history of the sport through the collection of results, the assembly of more than 230 wrestler-specific career records, and most recently, the publication of his second book WRESTLING IN THE CANADIAN WEST.

WRESTLING IN THE CANADIAN WEST chronicles the complete history of the wrestling business in western Canada, documenting the tenures of promotions such as Stampede Wrestling and careers of legendary Canadian wrestlers of past and present including Gene Kiniski, Don Leo Jonathan, the Harts, and hundreds more.  Drawing from his direct connections within the wrestling industry and focusing on title histories, trivia, and road stories from the wrestlers themselves, this book offers the most thorough look into professional wrestling history than any sports reference book of its kind.

To date the book has been endorsed by more than three dozen superstars to appear in this region, among them include Nick Bockwinkel, Bret Hart, Leo Burke, Dan Kroffat, Rick Titan, Phil Lafon, Gil Hayes, and many more.

“Vance Nevada has done as much as anyone in this business as a writer, historian, and as a wrestler.  I’d say his contribution is as significant at the Harts or any of the top people in the business in Canada.  Having spent a lot of time in that country during my career, it was very interesting to learn some of the history.  This book was hard to put down once I started reading it.”

Get your hands on this book today and find out why Vance Nevada was the hands down choice for the Cauliflower Alley Club’s 2010 James C. Melby Historian Award.

Here’s where you can get your hands on your own copy:

Order online directly through the publisher Crowbar Press at www.crowbarpress.com

Saturday, May 1: Edmonton, Alberta
MONSTER PRO WRESTLING
Alberta Avenue Community Centre @ 9210 118 Avenue, bell time 8:00 pm
Vance Nevada returns to Edmonton after a non-title victory over Massive Damage, this time with the championship on the line in a First Blood Match!

Sunday, May 2: Edmonton, Alberta
Edmonton Pop Culture Fair
Mayfield Trade and Convention Centre, 9:30 am to 4:00 pm
Check out some great pop culture collectibles, including the definitive book on Canadian professional wrestling, “WRESTLING IN THE CANADIAN WEST”.

Saturday, May 15: Kindersley, Saskatchewan
GOLD DRAGON WRESTLING
The Old Zellers Building, Bell Time 7:00 pm
Vance debuts in Kindersley. Also a great chance for Saskatchewan wrestling fans to get their hands on their very own copy of “WRESTLING IN THE CANADIAN WEST.”

Friday, May 21: Kelowna, British Columbia
ALL STAR WRESTLING
Rutland Community Hall, as part of May Days
Vance Nevada challenges Disco Fury for the All Star Trans Canada title in a lumberjack strap match.

BRANDON, MANITOBA
Get your copy of WRESTLING IN THE CANADIAN WEST at Pennywise Books. Conveniently located on the 1000 block of Rosser Avenue in downtown Brandon, check out this and other great titles, including “The Filchers Forge” by Charles A.L. Dubois.

CALGARY, ALBERTA
Get your copy of WRESTLING IN THE CANADIAN WEST at Another Dimension Comics.

EDMONTON, ALBERTA
Get your copy of WRESTLING IN THE CANADIAN WEST at Happy Harbor Comics. With three locations in Edmonton, there is sure to be a location near you!

The book is now also in stock at the Provincial Archives of Alberta (Edmonton) gift shop for a limited time.

SASKATOON, SASKATCHEWAN
Get your copy of WRESTLING IN THE CANADIAN WEST at McNally Robinson Booksellers.

VANCOUVER, BRITISH COLUMBIA
Get your copy of WRESTLING IN THE CANADIAN WEST at Black Bond Books. With 12 locations in the greater Vancouver area, there is sure to be a location near you. As of this writing, copies are selling fast. Less than 10 copies left in stock. Don’t miss out!!

WINNIPEG, MANITOBA
Get your copy of WRESTLING IN THE CANADIAN WEST at McNally Robinson Booksellers.