“A SummerSlam Story: The Hart Foundation’s 3 Year Quest to Win Back the WWF Tag Team Titles” by Shocky Muraco 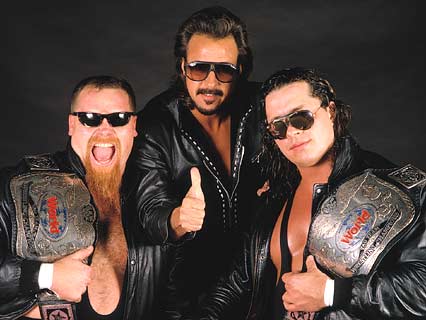 When the Hart Foundation relieved Jimmy Hart of his managerial services and turned into fan favourites in 1988, they made a pestering enemy of the Mouth of the South. The Harts set their goal on regaining the WWF Tag Team Championship which was being held by Demolition – Axe and Smash. The Harts/Demolition match took place 25 years ago at the inaugural SummerSlam event; Demolition had the usual services of their manager Mr. Fuji, with the additional support of Jimmy Hart whom stood at ringside for the match. I clearly remember the aftermath seeing an angry, helpless, defeated Jim Neidhart kneeling over the unconscious Bret Hart – the recipient of a megaphone blast to the head which led to the loss of the match.

In the following year, the Harts wrestled the newly crowned tag team champions Tully Blanchard and Arn Anderson in the opening SummerSlam contest. The match was wrestled under non-title conditions, if the match went in favour of the Hart Foundation, then it would secure them of a future title shot. Bret and Anvil split into temporary singles competition earlier that year, the match against Tully and Arn was a one off attempt to continue their quest for the tag belts. Unfortunately for the Hitman and Anvil, they were unsuccessful and outnumbered to the cheating tactics of the Brain Busters and their manager Bobby Heenan. Following that loss at SummerSlam, Bret and Neidhart resumed their singles careers for the remainder of 1989.

The next year, the Hart Foundation regrouped again, this time focused and determined to win back the WWF Tag Team straps. Even before the SummerSlam ’90 card began shaping, the Harts made a challenge to wrestle the winners of the WrestleMania VI Demolition/Colossal Connection tag team title match. The Harts showed their sheer dominance when they ambushed the Bolsheviks at WrestleMania in win that took 19 seconds. The quest for tag team gold took a sour turn for the Harts when Demolition (the winners of the WMVI tag team title match) added a third member to their team – Crush, and eventually becoming villains.

The stakes were raised when the tag title match became a 2 out of 3 fall contest, and just like previous SummerSlam encounters, the Harts were again outnumbered.  Demolition picked up the first fall using their ‘decapitation’ finisher over the Hitman.  The Harts took the 2nd fall as a result of a DQ.  The third fall seemed unreachable for the Harts with all 3 Demolition members finding their way to the ring, taking the liberty to drain as much energy from the Anvil and the Hitman.  Re-enforcements in the form of Hawk and Animal, the Legion of Doom came charging in aid of the Hart Foundation.  The LOD took out Axe and Smash which gave Bret and Neidhart the opportunity that had denied them in the past.  Using their signature brains and brawn line of attack, Bret crawled into position behind the isolated, inexperienced Crush as the Anvil sling shot shoulder tackled Crush onto the mat as Bret rolled him into a school boy pin fall.

Finally after a 3 year chase, the Hart Foundation were once again WWF Tag Team Champions. SummerSlam is a well told, career landmark for Hart Foundation (especially for Bret). This is one of those rare story lines that pays off at the end when told properly. No struggle, no success.