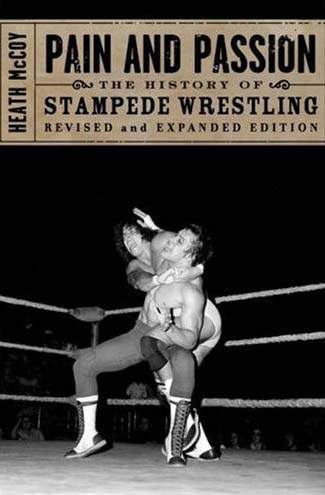 Bad News Allen, Gene Kiniski, Fritz Von Erich, “Superstar” Billy Graham, Abdullah the Butcher, Stan Stasiak, Chris Jericho, Chris Benoit, Jim Neidhart, Brian Pillman, the Dynamite Kid and Davey Boy Smith are just some of the names who got their start in a Canadian town called Calgary, Alberta. In addition to those names you must add the sons of legendary wrestler and promoter Stu Hart namely Bret “Hitman” Hart and Owen Hart who left their family promotion, Stampede Wrestling, to great levels of success and unfortunately tragic ends to their careers in the World Wrestling Federation AKA the WWE. But what really happened behind the scenes with the Hart family when the cameras stopped rolling and the fans went home. What were the trips across the Canadian Rockies like with a van full of wrestlers in the era of no cell phones or PDA’s? Author and Calgary Herald columnist Heath McCoy found out a few years ago and thanks to ECW Press and some current events, they reissued his book Pain and Passion: the History of Stampede Wrestling (333pp, $19.95 US, $22.95 CDN)

This book is a time machine taking the reader from the beginnings of the Hart family, namely the patriarchs Stu and Helen who both passed away a couple of years ago, to the Hart grandchildren who are under contract with WWE developmental (Harry Smith and Nattie Neidhart). In between those two points in time Mr. McCoy fashions a great legend of Stu’s rough childhood in the Canadian farmland to his becoming an Olympic style wrestler. Plus how he parlayed that success into becoming a professional wrestler under Toots Mondt and meeting his soul mate Helen Smith who would help Stu in being a loving wife and mother to the kids in addition to being Stampede’s office boss for decades.

McCoy chronicles the rise, fall, rise and final fall of Stampede Wrestling which was born in the 1940’s with Stu and some partners calling it Big Time Wrestling. The book follows some of the best wrestlers in the history of the sport and how they became quivering babies, like I would be, if we ever entered the feared Hart Dungeon, Stu’s basement workout area. McCoy gets frank comments from the wrestlers listed in my intro plus legends like Archie “the Stomper “Gouldie, Lou Thesz, Dory and Terry Funk, Harley Race, Angelo “King Kong” Mosca and Stampede’s TV announcer Ed Whalen. You will read of the lows of the business having to be shut down to have clothes for the children to the highs of Bret Hart, Dynamite Kid and Davey Boy Smith coming in the late 70’s- arly 80’s and getting Stampede Wrestling on TV’s all over the world.

In addition we learn of the Hart children, twelve in all; Keith, Bret, Smith, Bruce, Owen, Diana, Ellie, Georgia, Ross, Dean, Wayne and Alison on what is was like to grow up in the wrestling business. Some of their thoughts and comments are warm and memorable while others are down right cold and evil especially after the tragic death of Owen in 1999 that seemed to tear the family to its very foundation. In this respect Mr. McCoy shows no bias and holds nothing back and I do mean nothing.

If you have read Diana’s book UNDER THE MAT: INSIDE WRESTLING’S GREAT FAMILY or Owen’s widow Martha’s BROKEN HARTS: THE LIFE AND DEATH OF OWEN HART, this book is an excellent companion piece. I hope all of you who read this will pick up a copy and enjoy it.

For more information on other books, log onto www.ecwpress.com