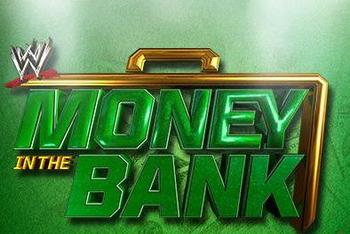 Editor’s Note: Columnist and radio host Arda Ocal posted his predictions for this weekend’s “Money in the Bank” pay-per-view in the Baltimore Sun.

WWE TITLE: JOHN CENA VS. MARK HENRY I only needed the “retirement” segment a few weeks ago on RAW to make me interested in Mark Henry as a title contender. It was well executed and fooled a lot of people. While I will watch this match with interest, I do think John Cena takes this one and Mark Henry is a one-time challenger. SummerSlam is the WWE’s second biggest pay-per-view of the year, and I don’t think Henry will be the WWE title challenger there. That position will go to Daniel Bryan, the man who has been getting the loudest reactions lately among the WWE Superstars and Divas. Cena wins this one by impressive AA.

The “double turn” in Chicago at Payback (shades of Bret Hart vs. Steve Austin at Wrestlemania 13) was impressive, and the roots continue to grow. This will be a terrific match with two superstars that pay attention to the fine details in a match, something I admire most. I personally would have preferred Dolph Ziggler to enjoy a longer title reign, and hope that bigger and better is coming for the “Show Off.” I’ve got Del Rio retaining. Ricardo was suspended on July 2 so he will not be a part of this match — a shame, because a lot of Del Rio’s boos come from his personal ring announcer, a man you love to hate.

Interesting cast for both briefcase matches. This one, for example is all “good guys.” For me, it’s all eyes on the returning RVD. What better way to make an impact than to instantly win the briefcase, maintain his high level of interest, justify the hype, have him in a high-profile match at SummerSlam and then cash in around fall? That being said, anyone in this match winning wouldn’t seem out of place. Daniel Bryan can win and cash in on Cena at SummerSlam. CM Punk can win and hold it a third time (a WWE record). Randy Orton is always a believable WWE title challenger — Orton vs. Cena is always a great rivalry. Sheamus is due for a title shot. Ditto Kane (at time of this writing, Kane is still a part of this match despite the attack on RAW. Personally, even if he is replaced, I won’t pick that superstar, likely Bray Wyatt, to win). Of everyone in this match, Christian perhaps needs the briefcase the most. But I’m going with RVD — that makes the most impact to me.

This one is all bad guys. I’ll be paying a lot of attention to the crowd to see how they react to a match comprised of all villains. It’s rare you get a match like this in WWE (Rick Martel vs. Shawn Michaels at SummerSlam 1992 comes to mind). Ambrose is US champ, so winning here isn’t really necessary. Swagger and Cesaro, to me, would be a better suited tag team going after gold in the near future. Barrett is a decent pick, as are Rhodes and Sandow if they continue their singles career. The sleeper pick is Fandango, who I still believe would be IC champion right now if he didn’t suffer a concussion before Payback, removing him from that triple threat title match at that PPV. I’ll go with Barrett, who has always been on the cusp but hasn’t broke through. This is a moment for him to get a seat at the main-event table. He’s a guy who can talk and is believable as a main-event guy.

Chris Jericho, the bulletproof, selfless superstar of WWE — is there anyone he won’t put over? — is one of WWE’s most important assets for that reason. The list of stars he has helped create since he adopted a part-time schedule is lengthy, and now we can add Ryback to that list. Granted, Ryback has been in pay-per-view main events, but his value has dropped in recent months and now it’s on Jericho to bring it back up. I’ll take Ryback in this one, convincingly, while hardcore fans applaud Jericho’s efforts.

This is a great match for this reason: we have a good IC champion in Curtis Axel, a Paul Heyman Guy who has the title lineage with his father, Mr. Perfect. He has a credible challenger in The Miz, which places importance on the title. The Intercontinental champion, in this case, isn’t just fodder for main-event guys. Despite Axel losing to Jericho on RAW, The Miz was involved, so it made sense. Give me Axel retaining and more challengers like this to restore the reputation and value of the IC title … please!

Same thing here as Axel vs. Miz: challengers that care about the tag titles facing the champs. The Shield are still important in WWE and they have a daunting task ahead of them — to help make these titles matter again. Matches like these will help. Shield retains, and I wouldn’t mind a rematch at SummerSlam with a stipulation.