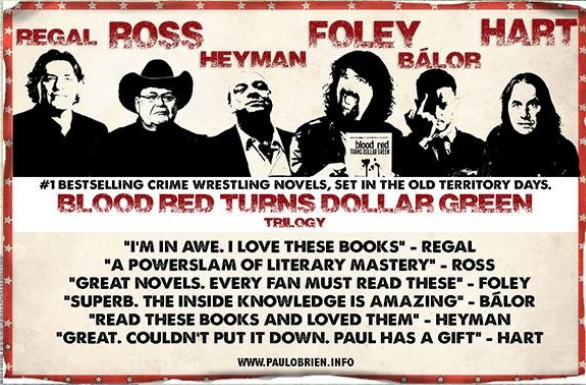 Author of “Blood Red Turns Dollar Green” Paul O’Brien joined “Multi-time Award Winning” the Rack Thursday Night. In a nearly 15 minute interview, he discussed his book and what we can expect from the trilogy, what he thinks of getting praise from the likes of Bret Hart and William Regal, what kind of research he did to prepare for the book, who some of his favorites growing up were, what did he learn about the wrestling business in writing this book, did he ever anticipate the success these novels would enjoy, the possibility of the series becoming a televisions series and so much more.

What kind of book is ‘Blood Red Turns Dollar Green’: “So as you mentioned it’s a trilogy now; the first book came out 2012, the next one in 2013 and then volume three has just come out a couple of weeks ago. These books are, the best way to describe it, and I get a name drop straightaway, but Mick Foley describes them as ‘The Godfather’ with suplexes and I can’t think of a better way than that to describe these novels.

They’re crime novels set in the pro-wrestling territory world, coming from 1969 to roughly 1984, in that kind of 15-year span, and what it’s really about is the bosses of these territories and they’re willing to do amass the most money, get your hands on the World Heavyweight Title and how they’re willing to do that under the guise of a federal government that kind of wants hem turned over for what is essentially America’s longest con. So, if you like ‘Boardwalk Empire, ‘The Godfather’ or ‘Sopranos’, these novels are for you.”

What’s it like to be endorsed by the likes of wrestling greats Bret Hart and William Regal: “It’s huge, especially those two you mentioned and particularly those two you picked out because there’s others as well, those two are so serious, and rightly so, about their craft and art, that when I sent the novels to them and they’re both known as straight shooters; they don’t suffer fools gladly and I know I was getting into. As well, William Regal in particular, don’t tend to talk outside of WWE programming or DVDs; I’d never heard of William Regal endorsing anything outside of the WWE world; I’d never heard of Bret Hart endorsing anything outside of the WWE world or what he may have for sale on his website or anything like that, so for me it was unprecedented to have William Regal say he was in awe of the research. To have Bret Hart say he just couldn’t put these books down, those are just things I’d wished and dreamed of when these novels had first come out but to actually have it happen was quite humbling I’d have to say.

On what kind of research did he have to do for the book: “Well, I suppose the first thing to tell your listeners is that I’m a thirty-year wrestling fan myself and I’ve been writing professionally for about 20 years, so I’d always wanted to marry the two of those and I knew and to write about an era, and as you can tell I’m not from the (United) States, my accent might give it away; I’m from Ireland and I was barely born and for some of the era I wasn’t born at all; I was born in 1978 myself and I write about 1969, so to write about an era in which I wasn’t quite born in and in a country I wasn’t born into, I wanted to make sure, quite literally now, the color of the carpets was the right color; I wanted to make sure the weather on the day I am writing about is replicated in my books, I would make sure that the times the trains left on was replicated in my books. There’s a scene where two characters meet in a restaurant, and I made sure that restaurant only existed but was actually open; The Spaghetti Factory in Portland, Oregon in 1969 and I found photographs of that day and I described the interior. I mean it’s meticulous, meticulous research.”

Who were some of his favorite wrestlers growing up: “I was hooked by Haku and the Barbarian. We all know the Barbarians a huge, massive man, but Haku was huge in a different way as he was thick. I’m sure to a normal human he’s a huge man, but on television he didn’t look as tall as the other wrestlers but I was just fascinated by how powerful he was, even though he wasn’t the tallest. My first wrestling match was a Haku/Barbarians wrestling match that I saw across the room at a Friend’s house and kind of from that day on, I was hooked.

From then, kind of going through the generations, Jake ‘The Snake’ Roberts, went through a period where I loved Demolition until I saw about ten of their matches and thought ‘Well, I’ve kind of seen this before’. I loved Mr. Perfect, Bret Hart, Roddy Piper. In the most recent Attitude Era, Mick Foley, overall I’d say is probably my favorite wrestler of all time. I think I could relate to him as a person, particularly when he moved from Mankind the basement dweller to Mankind when he started to wear the white shirt and he was a bit more funny and cut a bit more articulate promos. So, he was kind of my guy.”

What did he learn about the wrestling industry while researching and writing his books: “I’m glad you asked that because I’ve never got the chance in any interview to say the what I really learned is how generous the people in the wrestling business are. Whether that’s the wrestlers, or the old hands, or someone like Jim Ross, who we all know is the greatest of all time announcer; all of these people gave their time to me, endorsed these novels for no fees or paid advertisements. They left me their e-mail addresses, their phone numbers.

Like for this third novel, in the thank you page, I thank Jim Ross and Fergal Devitt, who some of your listeners might now know as Finn Balor (from NXT), because both of these guys gave me a peak inside their world. For instance, I asked Fergal Devitt about Japan because there are quite a lot of scenes that take place in the third book in Japan and he just gave me some wonderful insight, and with Jim Ross, kind of the business side of things in the 70’s in the territory days; Jim Ross has answered several of my e-mails time and time again on whatever type of information I needed or sought.”

What is it like knowing the books are possibly becoming a television series: “It’s quite surreal; for me, I enjoy every e-mail about it, every phone call. They flew me out to Hollywood, put me up in the Hollywood Hills, took me out to the Santa Monica Pier, showed me the pilot script, even let me write a few scenes; for me so far, the adventure of Hollywood has been the opposite to what I have heard, which is they’ll take it off you, they won’t listen to you and won’t return your calls. I mean, at the moment, I talk to the producer three-to-five times a week about all sorts of matters regarding the tv series.

For me, it’s the cherry on top of the cake; what I wanted to do was write a trilogy of the best wrestling books that have ever been written, some would say they’re the only wrestling crime books ever written. That’s actually another quote from Mick Foley ‘There’s only ever been three great (wrestling) crime books ever written and Paul O’Brien has written them all’. He loves the kind of one-line quotes to give me, but the Hollywood thing have been quite surreal.”

You can follow Paul through his Twitter (@tweetpaulobrien) or through his personal webpage (www.paulobrien.info) for all the latest on his news and notes including the latest on his ‘Blood Red Turns Dollar Green’ series, including the books itself and other merchandise. You can also order or purchase any in the ‘Blood Red Turns Dollar Green’ series, endorsed by the likes of William Regal, Bret Hart, Jim Ross, Fergal ‘Finn Balor’ Devitt, and more, through Amazon, Barnes and Noble, The Apple iBookstore or your local book retailers.