Home / Podcasts / Between the Ropes Interview with Gail Kim

Between the Ropes Interview with Gail Kim 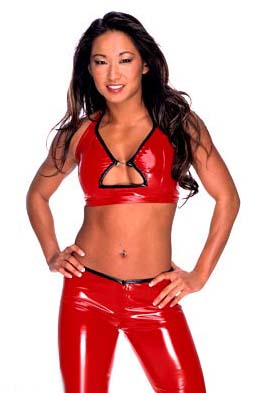 TNA Knockout Women’s Champion Gail Kim appeared as a guest on the November 7th edition of Between the Ropes to discuss her role as the top female wrestler in the company, working with Awesome Kong, her time in WWE, and more.

Kim expressed her feelings on becoming the first-ever TNA Women’s Champion at last month’s Bound For Glory Pay-Per-View. “It’s such an honor to be part of history. What more could a girl ask for when you dream of being in this business? It was just such a fight over the past two years to just get this women’s division even started. So, I definitely feel grateful and appreciated from the company. When they (TNA) called me, they said, â€˜We’d like to have a women’s division, but realistically we have an hour show, which his approximately forty-three minutes of programming.’ And (the company only had) – let’s see, Traci was there – Ms. Brooks – SoCal Val, and that was pretty much it. You can’t have a women’s division with three girls. So, I was patient. And I would say about a year and a half marked in, I started becoming really antsy, becoming frustrated and impatient. But, they’ve pretty much lived up to their word, it’s just that it took longer than I thought.”

Gail spoke about her time as a valet for America’s Most Wanted. “I loved working with them. I think for any women who is going to be in the business, it’s a good experience to learn how to manage. Usually people start managing and then they go into wrestling, and for me it was the opposite. So, it was a great opportunity to get a chance to get more personality out there and be part of a team. I loved the guys, they treated me really, really great.”

Speaking as a current TNA Champion and former WWE Women’s Titleholder, Kim compared her current tenure in Total Nonstop Action to her time as an employee of Vince McMahonâ€˜s company. “Oh, wow. We had a really strong women’s division there (WWE) as well. I loved being part of that women’s division. I mean, Jazz, Trish Stratus, Victoria, Lita … the girls were so talented. And it’s different, because we felt like … you know, women’s wrestling wasn’t the greatest when I entered TNA – in general, in all the companies. So, I feel like we’ve kind of started it back up again, to get the women’s wrestling out there. Because when I would do interviews and meet fans they would say to me, â€˜Women’s wrestling sucks.’ And that really, really disappointed me, because I just felt like, â€˜Man, we worked so hard, and I don’t want the fans to feel this way.’ And we can put on just as entertaining matches as the guys – or physical. And now TNA is giving us the opportunity, and I think from the reaction that we’ve been getting, we’ve been stepping it up.”

The careers of Gail Kim and Traci Brooks have continuously intertwined over the years, beginning with the two women training together at Ron Hutchison’s wrestling school in Toronto, Ontario. The fact that both Kim and Brooks were able to take part in the Bound For Glory “Gauntlet” was rewarding and emotional for the ladies. “That first Women’s Championship Title match … it just meant so much for us to be in the same ring together”, Kim said. “We weren’t actually in the same ring together in that match, because she was the first entrant and I was the eighth. But, I’ll just tell you, every time we talked about that match coming up we would have tears in our eyes. It sounds so cheesy and mushy and whatever you want to call it. It was just such an emotional rollercoaster for us to get to that point. That night was what we had been waiting for – longer for her, because she had been there since day one. And it just meant so much to us, everything lived up to our expectations.”

Female competitor Awesome Kong has garnered the attention of TNA fans with her unique look and strong work in the ring. Gail Kim is looking forward to a probable Women’s Championship program with Kong in the near future. “She had really made an impression … She’s a very talented girl, I’ll tell you that much. And she’s kind of come out of nowhere, which is great, and people don’t know who she is. And she’s actually come from Japan from the West Coast, and she has years of experience behind her. I think she adds so much to the division, just looking different – you can’t always have the cookie-cutter pretty girls. I think it’s great when you have characters and different types of girls.”

Gail shared her opinions regarding other women on the TNA roster. “I actually trained with Angel Williams as well (in addition to Ms. Brooks), because she’s from Toronto, Ontario, Canada as well. ODB has years of experience behind her as well. She started around the same time as me and Ms. Brooks, so eight years now, I would say. Roxxi (Laveaux) – she is a very talented wrestler, and I really can’t wait to get in the ring with her, because I think we’re going to have amazing matches. She’s a great character as well. I just think all the girls that are coming in, they all have something different to offer – different style of wrestling.”

You can hear this interview in its entirety, as well as the complete archived November 7th edition of Between the Ropes – including Gail Kim’s feelings on participating in bikini contests and bra and panties matches, her thoughts on the WWE Diva Search, the possibility of releasing a cookbook in the future, and more – at www.BetweentheRopes.com. Between the Ropes can be heard Wednesday nights at 10:00pm ET on WQTM 740 The Team in Orlando, Florida and archived at BetweenTheRopes.com.