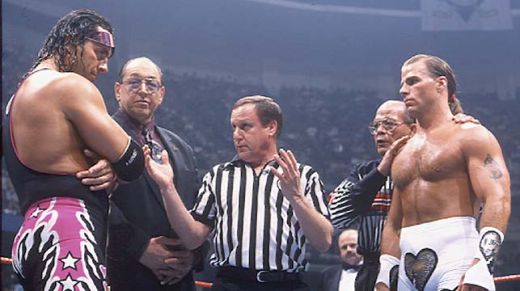 Seventeen years after the “Montreal Screwjob” at the 1997 Survivor Series, Bret Hart and Earl Hebner stood face-to-face in the ring and buried the hatchet.

Matt Hardy posted video of the encounter, which began with Hart calling Hebner down to the ring. The WWE Hall of Famer said to the audience that out of everyone, no one got a raw deal from the “Montreal Screwjob” more than Earl, who was ordered to ring the bell by Vince McMahon and call for a Hart submission when nothing of the sort had been officially booked. Hart and Hebner hugged, then Hebner got emotional, thanking Hart for making peace at the show in his home state.

Hebner, who officiates for TNA Wrestling, has been selling “Damn Right I Did” T-shirts for the past several years to make money off the incident. On this day, Hebner wore an Impact Wrestling official T-shirt to the ring.

Matt Hardy noted of the encounter, “It was a touching moment to see two of the most famous characters in pro wrestling bury the hatchet & find peace & closure.”

In Hart’s 1998 documentary, Hitman Hart: Wrestling with Shadows, he said that his fears of being double-crossed were largely assuaged because he was close friends with referee Hebner and trusted him implicitly. Asked by Hart, Hebner swore by his children that he would never double-cross Hart and that he would rather quit his job than participate in a screwjob. However, according to Michaels’ account of the events in his 2005 autobiography, Heartbreak and Triumph: The Shawn Michaels Story, Michaels himself informed Hebner of the plan only on Sunday evening, just as Survivor Series was about to commence. This contradicted what Hebner said on a 2003 edition of WWE Confidential, claiming that he first knew of McMahon’s plan only ten minutes before the match finished, and out of panic following the bell ringing, he ran out of the ring, through the crowd and remained in his hotel room for the night, refusing to speak to anyone.