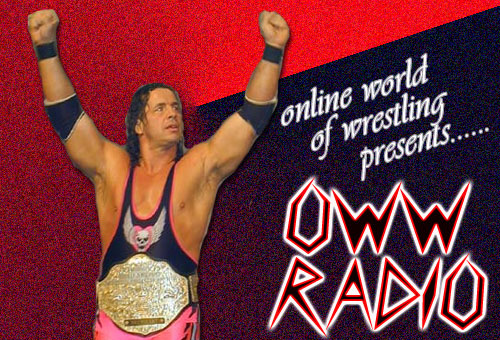 Online World of Wrestling is proud to present OWW Radio hosted by Nick Anthony, joined weekly by Dave “Kaveman” Kave with This Week in Wrestling History and Aaron “TNA” Kendrick with the Match of the Week. In this show Nick and Producer Scott (NDX) speak with Bret “The Hitman” Hart,  the legendary in ring technician with success in the top wrestling promotions.

Heene Family Balloon Hoax Story (7:20)
Before the Bret Hart interview Nick and Aaron discuss the incidents that occurred last week that involved the Heene Family and “Bubble Boy.” The story made national, headlines if not global. Nick and Aaron discussed the family’s background and the interview conducted by Wolf Blitzer on CNN’s Larry King Live and MSNBC’s The ED Show. Nick stated in the segment that he hopes the legal system in Colorado bankrupts the Heene family.

Bound For Glory (21:09)
Nick and Aaron switch gears following the Bubble Boy issue, focusing on TNA Bound For Glory. Nick’s main point of interest focused on the main event AJ Styles vs. Sting for the TNA Championship. Nick then asked the question “Do you think Sting is over rated?” – in which Aaron debated Nick on the issue. Nick believes that Sting hadn’t had many noticeable feuds in his career. He brought up Hogan, Flair, Luger and Terry Funk. Aaron claimed that Sting carried the WCW and kept it afloat for all the past years. However Nick would claim it was the Horseman. The debate ended when Nick asked for the listeners to join the conversation at [email protected].

Following that debate Nick and Aaron talk about the 20 minute match between A.J. and Kurt on TNA’s iMPACT prior to Bound for Glory.

News Segment (32:17)
The News segment kicks off with John Lennon’s Beautiful Boy bringing us in from break.  Nick and Aaron talk briefly about “Mr. Holland’s Opus,” then Wolf Blitzer and conservatives. In the segment the current top news in the industry was talked about the latest news as of Tuesday Night October 20, 2009.

Bret “The Hitman” Hart Interview (58:40)
Nick introduced Bret Hart in this segment, and began by asking Bret where would he be without Professional Wrestling? Some of the highlights of the interview include Bret talking about Gorilla Monsoon and the impact he had on his career. Bret would also mention in the interview that HHH and Shawn are cancers to the industry when the three were talking about the entertainment side of the business. Bret then would compare himself to John Cena stating that he was always a company guy, much like Cena and all about the team effort. Nick would disagree with Bret on his statement about Cena, then Bret clarifies. Scott “NDX” (OWW Radio Producer) would join Nick in the interview asking Bret about the comparison of the territory days to the indies of today. The interview ran 25 minutes long and ended with Bret saying, “You’re listening to OWW Radio.”

Interview recap/Match of the Week/This Week In Wrestling History (1:24:54)
Bob Marley’s “We Jammin” brings us back from break Aaron returns with Nick to talk about ECW and Tony Atlas, the Bret Hart Interview and his feature “The Match of the Week.” In the feature, the TNA iMPACT 20 minute draw between Styles and Angle was awarded. Aaron sparked a debate on why TNA would have such a great match before a big PPV that may or may not have out shined the event or that events title match between Styles and Sting. Nick claimed that it was a great move by TNA as we can look forward to an A.J. vs. Kurt feud brewing before the next PPV.

Healthcare/Autism in America (1:33:59)
Also in this segment Nick merges his genres of Talk Radio again. Bringing up Autism and the Healthcare situation in America. Nick goes on a rant about Doctors sticking babies with shots when they aren’t even 1-3 hours old. He claimed that the US Government knows about it and yet refuses to do anything about it. He brought up facts stating that the shots contain huge doses of mercury which are a direct cause of Autism. Nick then states he only hopes that President Obama’s Healthcare bill passes. He then apologies for his rant and returns to Wrestling Talk.

OWW Radio wish to thank the Producers who make these shows possible every week OWW Radio would also like to extend a huge thanks to Bret “The Hitman” Hart.