Home / Podcasts / Brian Knobbs Interview on In Your Head

Brian Knobbs Interview on In Your Head 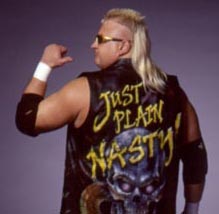 Brian Knobbs, one half of the famous Nasty Boys tag team, was the guest on the September 5th edition of the In Your Head radio show, hosted by Jack, One Inch Biceps and Barbie Richards at http://www.inyourheadonline.com

Knobbs promoted WCWA Rulz: Dream Reunion II on October 6 in Kokomo, Indiana. Knobbs had not been to the first one and was looking forward to both signing autographs in the afternoon and wrestling in the evening at the two-part event. Other guests include Jerry “The King” Lawler, the Rock and Roll Express, the Midnight Express, Jim Cornette, Rodney Mack, Jazz, Babydoll and Jimmy Hart.

For more information on buying your tickets please visit http://www.wcwarulz.com or http://www.dreamreunion.com

Jack asked if Knobbs enjoyed wrestling in Indiana. Knobbs said he always had, praising both crowds he’d wrestled in front of for the WWF (particularly at Wrestlemania 8 at the RCA Dome) and for the AWA.

Jack asked if Knobbs enjoyed interacting with his fans. Knobbs said firstly the Nasty Boys never would have been anything without their fans. He also said he appreciated being remembered after twenty-two years and enjoyed all the matches fans would bring up from as far as two decades back.

Jack asked if doing comedy in their good-guy roles helped prolong Knobbs’ career, specifically the “Pity City” move. Knobbs explained that it was a goof move used for humiliating his opponents. To the hosts’ amusement, Knobbs revealed he never used deoderant, no matter who was taking the move, and that it disgusted many opponents when they realized it – after it was too late. To Jack’s disappointment, no fan has ever asked to have his picture taken with Knobbs while in the Pity City.

Knobbs plugged his upcoming television show, Trailer Court Justice. Brian Knobbs will play the judge on a People’s Court-style show with real cases and a Maxim model as his bailiff. He said the show was pitched to him by an old wrestling friend from Calgary who now works in television. For more information please visit http://www.trailercourtjustice.com

Jack asked why the Nasty Boys ever needed a manager, considering how charismatic and comfortable Knobbs was talking to people. Knobbs called Jimmy Hart their “only true manager,” as someone who was into his character and “could do no wrong.” He said Missy Hyatt was really only there for eye-candy, rather than a talking role.

Jack asked which company he enjoyed wrestling for the most. Knobbs recalled WCW as a more wrestling-oriented company, while the WWF had a lot of showmanship on top of its in-ring product. He said that without the WWF the Nasty Boys never would have become the legends they are today, and that he really enjoyed the pay.

One Inch Biceps asked Spec_Sun’s question from the message board, wanting to know what Knobbs’ favorite or least favorite moment was in the AWA. For his fondest memories, Knobbs recalled some very popular matches with the Midnight Rockers (Shawn Michaels and Marty Jannetty). On the less fond end, he recalled a match with the Midnight Express where Saggs lost his tooth and spat it into the middle of the ring. He was bleeding but finished the match and went to the back, where the promoter asked him if he could go back out and help with another set of TV tapings. He praised the AWA as a strong territory where he enjoyed wrestling.

Jack asked if Knobbs is proud to have wrestled at the top of the AWA, WWF and WCW. Knobbs said ‘Yeah,’ and then went on to recall the time the Nasty Boys beat the Hart Foundation at Wrestlemania 7 with all the celebrities backstage and in the crowd. He called Wrestlemania “the Superbowl of wrestling.”

Knobbs teased the hosts for not coming to Dream Reunion II (they all live very far away), and got One Inch Biceps to say he’d try to make it. He promised to share some road stories in person, but wasn’t sure they were safe for the airwaves. “They didn’t call us the Nasty Boys for nothing,” he joked.

A caller brought up Greg Valentine, who Knobbs will be wrestling in Florida later this year. Knobbs revealed they are actually brothers-in-law, and that he loved brawling with Valentine. The caller asked who Knobbs’ stiffest opponent was. Knobbs said it was either the Steiner Brothers or the Road Warriors. He recalled one time in Syracuse when Hawk knocked out Saggs with one hit.

Jack asked about Max Payne. Knobbs had unkind words for Payne, saying he didn’t know what he was doing and injured both his neck and his shoulder, almost ending his career. However, Knobbs fondly recalls Cactus Jack (Mick Foley), saying he and Saggs had great matches against him.

Knobbs said he wasn’t always the biggest, and took to wearing t-shirts to cover up his body. Then all he’d have to do was work on his arms to make sure they looked good.

Jack brought up the Hall of Fame portion of the Dream Reunion II event, mentioning that both the late Bam Bam Bigelow and Sherri Martel would be inducted. Knobbs said he appreciated that because both had been dear friends and would always be in his prayers and in his heart.

You can listen to the full-length interview at http://www.inyourheadonline.com, and new episodes every Wednesday at 8e/9c PM including this week with Brad Anderson.