Home / WWE / Bruno Sammartino talks about Triple H, the WWE Hall of Fame, the “Attitude Era”, and much more

Bruno Sammartino talks about Triple H, the WWE Hall of Fame, the “Attitude Era”, and much more 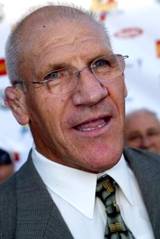 Below are some of the highlights and the full interview:

On being highly critical of the WWE during the ‘Attitude Era’ and turning down the WWE Hall of Fame invitation.

“I had been very outspoken about some of the things that were bothering me…I didn’t like the direction, as far as the nudity, vulgarity, and profanity like there was no tomorrow…I felt in my heart that they were very wrong, and I felt that going into the Hall of Fame would be hypocritical of me at the time and I just wouldn’t do it”

On how a conversation with Triple H convinced him to accept the WWE’s invitation to the Hall of Fame in 2013.

“After all these years, Triple H called me. I must say he came across very, very honestly, and straightforward. Triple H said that they have a very strict drug testing policy, lead by Dr. Maroon. Triple H said I want you to watch wrestling on Monday Night RAW and watch the changes about the nudity, vulgarity, and profanity”

“I went back in because I liked what I heard about the drug testing, I liked how they cleaned it up as far as the nudity, vulgarity, and the profanity…everything that I’ve seen so far is really how he told me it would be.”

On whether he follows wrestling today.

“I do watch it. I think guys like Cena work very hard. Guys like Brock Lesnar, Ziggler, Orton, and Sandow work hard and do a lot of great maneuvers, have good work rate, seem very conscientious about the business, and being the best they can be.”

On nearly dying as a kid.

“In Europe, I was just a little guy… the winters in the mountains were very nasty. We were up there for 14 months and I was getting very sick..and was literally dying with what turned out to be rheumatic fever. She did all kinds of things like putting leeches on my body to suck the poison out of my system.”

On being bullied as a kid who just came over to America and how it was instrumental in getting into wresting.

“When I came here (America), because of what I went through with rheumatic fever, I weighed 84 pounds and that’s when I experienced bullying because I was different. I started exercising and putting meat on my body and growing..that’s when I started taking up wrestling.”

On writing his book.

“Other people kept asking, Bruno, you had such an interesting life…this is a story that needs to be told…I thought writing a book, that must take a lot of time. I said that the only thing I ask is the book be done honestly, sincerely, with no exaggeration.”

On his documentary and the first local showing in his hometown of Pittsburgh.

” There will be a showing on Mother’s Day , May 11th in Pittsburgh. A lot of different people are looking at the documentary, to take it worldwide… But we hope it shouldn’t be long.”

On his initial experience in the wrestling business, and being suspended and blackballed.

“I think people really started believing in me when they saw me pickup Haystacks Calhoun in the Garden and all that.”

” There were promises made to me as far as if I became a professional wrestler, that I was going to be given every opportunity to be a headliner..and that’s the only reason why I accepted.”

On how Vince McMahon Sr. contacted him, and asked him to wrestle for his organization.

” I really got a break and I clicked, and started doing really well. I got a phone call from Vince McMahon Sr and said what is it going to take to get you to come back? and I said to give me Buddy Rogers and a chance to become the new champion…Buddy Rogers and I never liked each other to be honest, however I take nothing away from him.”

“They asked me if I would be willing to make some appearances where requests come in from some particular shows in Chicago, Philadelphia, and Connecticut. With the Hall of Fame and WrestleMania coming up I will be spending a lot of time doing question and answer session and autograph sessions.”

You can listen to the full interview with Bruno Sammartino by clicking here.