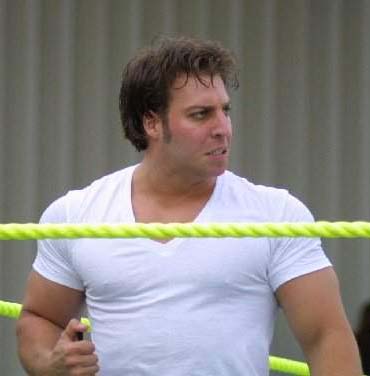 “DOMINO” CLIFF COMPTON DISCUSSES HIS RELEASE, TNA, THE ORIGINAL PLAN TO EVOLVE DEUCE AND DOMINO, AND MORE IN HIS FIRST SHOOT INTERVIEW EVER By WorldWrestlingInsanity.com

In November, ClubWWI.com brought you the first ever interview with Sim “Deuce” Snuka. Now, his elusive partner, Cliff “Domino” Compton, breaks his silence in the same way by speaking exclusively to James Guttman for over an hour in his first shoot interview as well – making ClubWWI.com the only place to hear from both former WWE Tag Team Champions Deuce and Domino. Now that’s “all about cool…”

Following his WWE release last year, Cliff disappeared from the scene. As he joked on ClubWWI, Compton became “The Howard Hughes of Professional Wrestling.” When he decided the time had come to speak to his fans, he chose the Club and explains why during his interview. That’s just one of a ton of topics that come up including his original choice to play “Cherry,” why that didn’t happen, Jim Cornette‘s plans for his character, why that didn’t happen, the real story of D and D’s debut, working with Chris Benoit, and tons more. For the full list of topics head to:

For all the latest information on ClubWWI guests and World Wrestling Insanity, join our Facebook fan page at:http://www.facebook.com/pages/The-World-Wrestling-Insanity-Dot-Com-Page/275219172353

One thing fans will pick up on from hearing Cliff speak to JG is that he has an incredible mind for wrestling and stays positive about the business in general. James remarks that Compton’s self-imposed hiatus for the past seven months must be good after being on the road for a few years and he agrees. There’s no animosity on his part at all:

“It was great. John (Laurinaitis) called me and he said, ‘You didn’t do anything wrong. You didn’t do anything bad. It’s just a budget thing. I’ve got to release talent and unfortunately you’re one of the guys.’ I said, ‘I understand.’ I had like a one hour conversation with him. He said, ‘What do you want to do? Do you want to go to TNA? Do you want to go to Japan?’ I said, ‘No, man. I’m just gonna chill and do some other stuff. I’m gonna take it easy.’ I was always a big fan of the entertainment side of wrestling. I was looking into Broadway type stuff. Broadway shows. Small stuff, not like leading man roles. Soap operas and that type of bullsh*t, you know? Just take a break from wrestling and do some other stuff.”

He explains to ClubWWI.com listeners that his love for wrestling brought him back to the fold and now he’s focused on making appearances yet again. Cliff also discusses the Domonotion Youtube videos he created, why they may have leaked online, the identity of “Tiny Tim,” other ideas he’s pitched through the years, and more.

Had the team not ended, though, what would the future have held for Deuce and Domino? The greasers seemed to confuse some people who weren’t sure if they were supposed to actually think it was the 1950s or not. The former Domino says that they had planned on explaining themselves more in pre-debut vignettes, but that never happened. Prior to their release, the duo were supposed to take a unique turn thanks to one of the company’s most well known divas…

“The original plan was that Maryse was gonna step in, boot Cherry out, and she was gonna modernize us. You know what I mean? She was going to take us out of the ’50s. Have us roll in BMWs and Mercedes instead of a 1957 Chevy. That was kind of the idea. That didn’t really pan out.”

Compton reveals a ton of original Deuce and Domino plans including discussion of them retaking the tag titles, their original debut on Raw by attacking a WWE Hall of Famer, and more. Plus, why Stephanie McMahon wouldn’t let them hear their theme music before using it, the surprising way that Kara Drew ended up playing “Cherry,” their original choice for the role, why the Domino gimmick was strange for him at first, how it was created, WWE’s plans to bring in Andrew “Dice” Clay, and tons of other topics on ClubWWI.com.

So the question remains…TNA? He’s been there before, working dark matches when the company was doing Wednesday Night PPVs. In fact, as he talks about in his interview, he was actually there the night that Dixie Carter took over and introduced herself to the roster. But that was then. This is now. Now that Cliff Compton is getting back into the business, does the former Domino have any thoughts on Total Nonstop Action?

“I have never talked to TNA. I’ve never talked to them. I don’t think it’s a bad place. A lot of guys that I know are there. I know Elijah (The Pope) very well and he likes it there and Victoria. They love it. They’ve said, ‘You should try to come down and see what’s up or contact Terry Taylor.’ I said, ‘Yeah. Maybe when the time is right. Right now I’m just feeling things out.’ WWE called me a couple of months ago, threw an idea down, and they brought me up…”