Home / Behind the Scenes / Congratulations to the High Flyers!

Congratulations to the High Flyers! 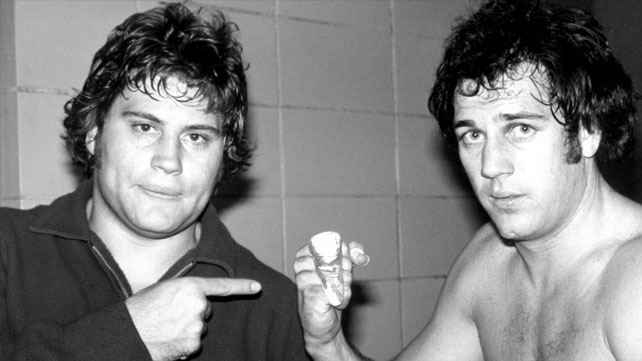 The Cauliflower Alley Club is pleased to announce that former AWA tag team champions The High Flyers, Greg Gagne and “Jumpin’” Jim Brunzell, will be honored at the upcoming CAC Reunion with a tag team wrestling award!

Gagne and Brunzell formed the team The High Flyers in the 1970’s and they enjoyed a number of high-profile feuds in the AWA with great teams including Bobby Duncum and Blackjack Lanza, The East-West Connection (Adrian Adonis and Jesse “The Body” Ventura), Pat Patterson and Ray “The Crippler” Stevens, and The Sheiks (Ken Patera and Jerry Blackwell). Their success was cemented on July 7, 1977 when they defeated Duncum and Lanza to win the AWA world tag team championship.

The High Flyers successfully defended the title in rematches with the former champions as well as other top contenders for nearly 15 months before they had to vacate the title due to an injury (Jim Brunzell sustained while playing in a charity softball game). The title was then awarded to Pat Patterson and Ray Stevens in September 1978. The Flyers won the titles a second time when they defeated The East-West Connection (Adrian Adonis and Jesse “The Body” Ventura) in June 1981.

The High Flyers held the title for a little more than two years before finally losing it to Ken Patera and Jerry Blackwell on June 26, 1983. Though they came close to regaining the title on several occasions, the High Flyers never recaptured it. The team parted ways shortly thereafter with Gagne moving on to singles competition. Brunzell worked frequently as both a singles and tag team wrestler before departing for the World Wrestling Federation in 1985 where he formed the legendary tag team the Killer Bees with CAC President Brian Blair.

The legacy of the High Flyers is secure within AWA history and the CAC is proud to recognize them with an award at the 2016 CAC Reunion!

Watch some of The High Flyers’ career highlights below: