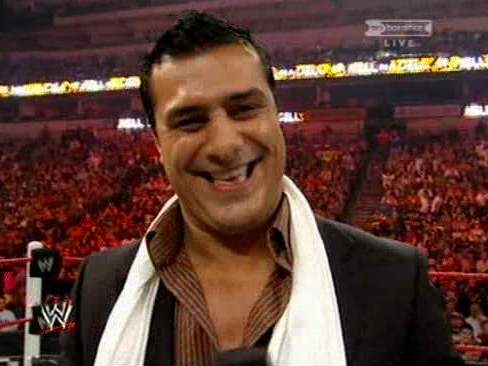 Sometimes we try to look for certain characteristics in wrestlers in order to relate to them or simply become a fan. But is hard to find the one who fills all our expectations. So I will break down all the features I’m looking for in a wrestler using actual wrestlers to develop the Ideal One!

Note: This isn’t an article about Alberto Del Rio…. he is just a great example!

SIZE: Probably the bigger the better, but being as huge as Andre the Giant is not an advantage all the time, so for me the ideal size is from man with the biggest pythons – Hollywood Hogan. At 6’9″ he is pretty much big enough to dominate the industry.

UPPER BODY: There are a lot of guys to choose from but I stick with the old school flavour. I bring Sadistic Steve Strong to the table. The demonic Steve had two mountains for a chest and lifting 600 pounds in free weight was a breeze.

ARMS: When it comes to arms, I trust the former World and Intercontinental champion Ultimate Warrior. Come on, I know you remember his pose showdown with Ravishing Rick Rude!

HANDS: Forget about it, if any of you saw Gorilla Monsoon hands back in the day you know what I’m talking about. Not only huge, but freaking long fingers.

LEGS: I know this is not a popular choice, but back in 1987 Cowboy Bradshaw a.k.a. JBL was a vicious heel with the mammoth legs that resemble those giant oaks in California.

SPEED: Most cruiser weights are fast, but Davey Boy Smith was quick, so quick in fact it was hard to appreciate some of his moves. He is perhaps the most underrated wrestler of all time.

CHARISMA: Woooooooooo, I wonder if there is someone else who was more charisma and stayed on top of his game as long as the Nature Boy Ric Flair. However I would also include Jeff Jarrett and Chicky Starr in that department.

RING SKILLS: Anybody from the Dungeon is a good pick but since I have to choose just one my pick is the rabid wolverine Chris Benoit. Sorry for Bret Hart fans, but he is my second choice.

MIC SKILLS: This is a two man choice between The Rock and Steve Austin, and I will pick the more clever of the two, the third generation superstar and action star The Rock!

GIMMICK: No one can deny that the most successful gimmick of the last 15 years, perhaps of all time is from the dead man The Undertaker. Every time you hear the Gong or see the old school images of vintage Taker your heart jumps out of your chest.

Another thing I have to point out is that my Ideal Wrestler should be a HEEL, not a face or a flip flopper, but a vicious in-your-face heel who offends your feelings as if he spit on your mother’s face. Man, where is Bruiser Brody or Abdullah when we need them…

Go ahead and make your own conclusions or better yet watch your old tapes!!!