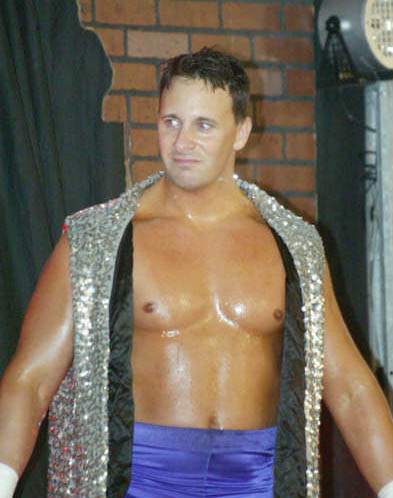 DANNY DORING REVEALS THE ORIGINAL NAME AND GIMMICK HE WAS SUPPOSED TO USE IN ECW, THE SHOCKING WAY HE LEARNED ECW WAS CLOSING DOWN, AND MORE By WorldWrestlingInsanity.com

He’s on.  He’s strong.  Now he’s about to get his interview on as one of the most original ECW Originals ever, Danny Doring, goes Clubbing with James Guttman for a nearly one hour ClubWWI.com shoot interview that you won’t soon forget.

Danny is all set to become the newest audio host at ClubWWI next week, but first he checks in with an interview that lets members know all about him.  From his early days training at ECW’s House of Hardcore to his TNA and WWE runs, Danny has immersed himself in the wrestling business.  By the side of Amish Roadkill, the Extreme Playboy excited crowds and electrified the ring every time he entered it.  Now, the never boring Danny Doring speaks straight and honestly about all things Doring  on ClubWWI.com! The all new discussion lasted 54 minutes and the huge list of topics can be found by: clicking here

Danny Doring is best known for his run in the original ECW.  As one of the most unique stars in the company, Doring impressed fans with his arrogant promos and up-tempo ring work.  His gimmick, combined with that of the Amish powerhouse, Roadkill, and even a young Lita (aka Miss Congeniality), left many fans with memories of what he could do.  However, his story could have been quite different.  Before the “Danny Doring” name was ever created, there were some other ideas about who he should be in ECW.  James Guttman asks Dan about the early days of Doring and what those days entailed.  Dan explains to ClubWWI.com members.

“At the (ECW House of Hardcore Wrestling School), I’m not sure who had the idea.  I think it was Taz who talked about me being actually Mikey Whipwreck’s brother.  So for a while there, I was going to be Danny Whipwreck and, for whatever reason, that didn’t happen.  We were on the show.  We were Team Taz, but we were also the ring crew.  We worked really hard behind the scenes to help build ECW.  A lot of people don’t realize how much work a lot of us the work we did…We were the ones setting up the pay-per-views, the tvs, the entrance ways, hanging from the rafters with no safety equipment to put up banners.”

Danny goes on to discuss tweaking his character, his WWE tryout match at Madison Square Garden, how not following Tony Garea’s advice seemed like a good idea at the time, chemistry with Roadkill, the movie that inspired Roadkill’s gimmick, the morale of the ECW locker room, the ECW star who served as minister at his wedding, the other ECW wrestlers who lived in his town, and much more.

On the subject of Danny’s devotion ECW, JG brings up the company’s demise.  Although the original incarnation of Extreme is overflowing with great memories, there are some stars from the company who take issue with the way it came to an end.  There seemed to be a lack of communication from the top down and a number of stars were left in the dark regarding the show’s fate.  Doring remembers the end well and explains his thoughts as the ClubWWI.com interview continues:

“At the last house show, Sandman goes, ‘We’re all going to the ring to have a beer in honor of the last show.’  I was telling guys backstage, ‘Don’t sell for this sh*t.  We’re not going to the ring.  It’s not over.’  We never heard anything.  A lot of people went to the ring.  We toasted with the fans.  I don’t think the fans knew what was going on.  Then the pay per view was supposed to be in two weeks, I was getting calls asking if the pay per view was going on …We never got a call, a lot of us.  I’m sure a lot of people knew or had official word, but me personally and I can think of about 15 or 20 other guys who called me had no clue, never got any notification.  Then, my phone started buzzing off the hook to turn on Raw and there was Paul (Heyman) commentating.”

Given Danny’s ECW upbringing in the business, it had to be a tough pill to swallow.  Guttman puts it straight.  Finding out that ECW was over that way had to, well, suck.  It certainly did and as Doring explains, it was something that served as a sobering experience.

“We all believed in those three letters, man.  We bled ECW. We loved ECW.  We were all mini Tommy Dreamers.  We believed in those letters and we believed in Paul.  And when our checks were bouncing and the money wasn’t coming in, we stood by Paul.  Well, most of us did anyway.  And we believed in him and we believed that he was always going to make sure things were okay…We never really thought that he would just not give a sh*t. It never even entered my mind when I saw him on Raw. Everyone believed he would take care of the guys. And when he didn’t, it pretty much opened our eyes to a lot of things. ”