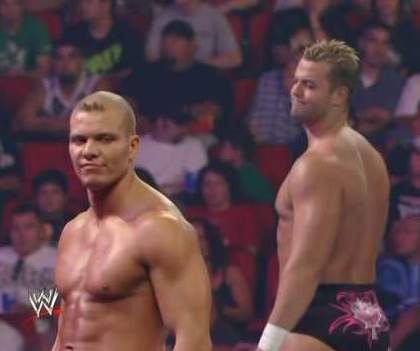 Diana Hart Smith Reacts To Her Son (David Hart Smith) & The Hart Dynasty Capturing The WWE Unified World Tag Team Titles, Which WWE SmackDown Superstar She Could See David “Tying In Knots,” When Her/The Hart Family Found Out About Their Involvement In The Bret Hart/Vince McMahon No Holds Barred Match At WrestleMania XXVI, Her Thoughts On Her Father (Stu Hart) Being Inducted Into The WWE Hall Of Fame (And The Logistical Chances Of “The British Bulldog” Davey Boy Smith And/Or Owen Hart Being Inducted Soon), & The Finished Product Of WWE’s “Hart And Soul” The Hart Family Anthology” DVD (And Why She Believes The Chapter On Owen’s Tragic Death Showed What The Family “Lost”)

The daughter of WWE Hall Of Famer Stu Hart, the sister of WWE Hall Of Famer/former WWE Champion Bret “The Hitman” Hart, & the mother of one-half of the all-new WWE Unified World Tag Team Champions, David Hart Smith, Diana Hart Smith, was one of the special guests on this week’s live edition (04/26/09) of Monday Night Mayhem (presented by ReelWrestling.com). You can feel The Mayhem live every Monday night (at 7PM ET/6PM CT), exclusively on The Monday Night Mayhem Radio Network (www.MondayNightMayhem.com).

Diana joined The Big Mosh, Blade, “The Chairman of the Board” Todd Vincent, & “Wild” Bill Brown for her return to “Your Home Of Wrestling Radio” (to discuss the release of the WWE’s all-new “Hart & Soul: The Hart Family Anthology” DVD), which is now available in Windows Streaming Media or via Monday Night Mayhem’s official Podcast on ITunes:

Interview highlights courtesy of The Mayhem’s official correspondent, Paterson From New Jersey:
Her reaction/thoughts on the The Hart Dynasty capturing the WWE Unified World Tag Team Titles this past Monday night & if reality has sunk in for her son’s first title reign in the WWE: “No it hasn’t. I’m rather giddy right now but honesty I had no idea, and I don’t think DH had any idea. I’m so happy. I felt they deserved this for a long time, and for whatever reason, it took this long to happen, but all good things comes to those who wait.”

What she sees for her son’s eventual first big singles push (and if that could include an eventual split to The Hart Dynasty) & which current WWE Champion (seen on SmackDown) she could see David “twist in knots”: I think initially when he started with the WWE, it would have been a great thing to see Tyson (Kidd) & DH go up against each other and demonstrate what they learned, and since they know each so well. It would be like watching Davey & Dynamite wrestle each other, or Davey & Bret putting on a clinic on wrestling: technique & shoot fighting, along with high flying. But it never happened, even though they wrestled in FCW against each other, and they had standing ovation after their matches, but it never happened on a national scale. I think if DH wrestled in singles, his size is so much to his advantage, he could wrestle great matches with anyone like Triple H or Randy Orton. This is a parent’s prerogative, but I think he could just tie Jack Swagger in knots. I think he would eat him like a cat would eat a little mouse.”

When her & the rest of the Hart family learned that they would have a role in the Bret’s No Holds Barred Match vs. Vince McMahon at WrestleMania XXVI: “I had no idea until the weekend of WrestleMania. I was over in England in January when I found out about the induction for my dad (Stu Hart). Then I guess in March, I was getting a little anxious to know what was going on, and I didn’t want to ask, because I didn’t wanna seem like I was getting pushy. I would hear through the grapevine that certain members would come to WrestleMania & certain ones wouldn’t. DH told me to book a hotel room in February, and I did, and held on to them in case I needed them. Getting into March, I knew that certain family members were for sure going, and I talked to the director for the ‘Hart And Soul’ DVD, and he said that the DVD was coming around that time, and most likely all the Harts will be at WrestleMania for your father’s induction. So I made sure my work was covered and got a dress.”

Her thoughts on the Owen Hart section of the “Hart And Soul” DVD & how she believes the finished product came out: “I thought it was accurate, and they didn’t gloss over anything. I think they were trying to help us have closure, because if they had just brushed over it, I think they would have gotten a lot of criticism over that. But they didn’t go so strong on it that it stole from the story of my mom & dad, and all of us were a part of it…I’m glad it was put in the way it was. There was no shock value in it I think. They didn’t show the fall, they just showed Jerry Lawler & Jim Ross and what they said at the time. They then talked about the trial, which I’m glad they did, and my mom & dad walking into the courtroom. It just showed what we all lost.”

Whether this experience at this year’s WrestleMania could carry over to a possible induction for her late husband, “The British Bulldog” Davey Boy Smith and/or her late brother, Owen Hart: “I don’t know what would be more logical Owen & Davey being inducted in the Hall Of Fame. This past Hall Of Fame was something we all needed for closure, and when we got there, we talked. John Laurinaitis went to great trouble to get us together for a picture after WrestleMania, and that picture was the end of things. They had their party, but everyone kinda split up and went their different directions. I think that picture, when we all get our copies of it, will say so much.”

More is contained in this exclusive interview with Diana Hart Smith, including her candid thoughts on whether or not she believes the Hart family is now closer than ever (or not) after the emotional WrestleMania XXVI weekend, who had the greatest impact on her son’s career, & more comments on the release of “Hart & Soul: The Hart Family Anthology.” Log onto http://www.MondayNightMayhem.com right now to read “Wild” Bill Brown’s all-new review of the WWE’s newest DVD, which looks back at the legacy of one of the most successful families in the history of professional wrestling.

“Your Home Of Wrestling Radio” is officially presented by http://www.ReelWrestling.com, where your favorite Superstars are just one click away! The award-winning Monday Night Mayhem (voted on by you, the fans as the “Show Of The Year” in the 2009 & 2010 Wrestling Radio Awards) is also sponsored by: Sizzlin’ Sauces (the official hot sauce of The Mayhem: http://www.SizzlinSauces.com), Ticket Relief (the official online traffic school of The Mayhem; register today for your simple & hassle-free defensive driving course and save 20% by using the promo code MAYHEM: http://www.TicketRelief.com), & B. Brown Video (where you can relive the moments & memories of professional wrestling’s rare & vintage moments: http://www.BBrownVideo.com).