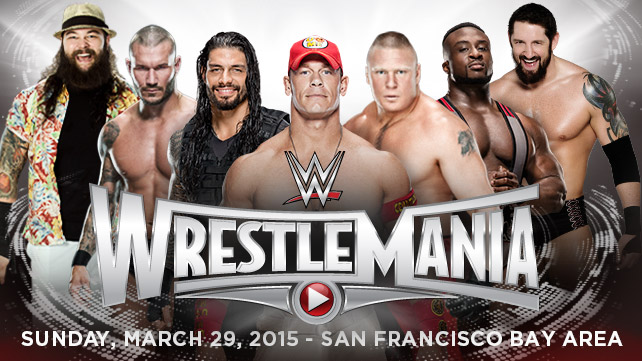 Fans from all 50 states and nearly 40 countries will descend upon the San Francisco Bay Area for a week-long lineup of festivities in celebration of WrestleMania 31, taking place this Sunday, March 29, live on WWE Network and pay-per-view at 7 pm ET/4 pm PT, from Levi’s Stadium in Santa Clara, Calif. WWE will also host a dozen community outreach events designed to give back to the local region. WrestleMania Week begins tomorrow, Wednesday, March 25, and includes the following events:

WWE Superstars Sin Cara® and The UsosTM and WWE Divas CameronTM and Eva MarieTM will visit the Lucile Packard Children’s Hospital Stanford and Ronald McDonald House at Stanford.  Mattel® will donate WWE action figures for the WWE Superstars and Divas to distribute to the patients at these two facilities.

WrestleMania Axxess (#AXXESS) is the ultimate fan experience for the WWE Universe. This year’s WrestleMania Axxess will take place from Thursday, March 26 through Sunday, March 29 at the San Jose Convention Center. Fans will have unprecedented access to meet their favorite WWE Superstars, Divas and Legends through a host of interactive fan experiences, including autograph signings and live matches. New this year, fans can experience the Elimination Chamber® where they can take photos with WWE Superstars. The imposing structure takes eight hours to set up and is made of 16 frames of steel, each weighing 300 pounds.

WWE, in partnership with the 49ers Foundation, Hire Heroes USA and Orion International, will host a Veteran Career Panel and Networking Event giving veterans an opportunity to network with key employers from the Bay Area and receive one-on-one career coaching. The panelists include:

WWE Superstar John Cena will host his annual Make-A-Wish pizza party at the Tech Museum in San Jose, where he will induct 25 wish kids into WWE’s Circle of Champions. As part of its 30-year alliance with Make-A-Wish, WWE will also host the wish kids and their families at WrestleMania 31. With more than 475 wishes and counting, Cena has granted more wishes than any celebrity or athlete in Make-A-Wish history.

Maria Menounos hosts the most glamorous event on the WWE calendar. Superstars, Divas, Legends and a host of celebrities walk the red carpet and tell-all to Maria and her co-hosts.

Randy “Macho Man” Savage and Arnold Schwarzenegger head up the WWE Hall of Fame class of 2015 (#WWEHOF). The WrestleMania eve tradition will telecast live from the sold-out SAP center in in San Jose, Calif. at 5 pm PT on WWE Network. This year’s inductees also include The Bushwhackers, Rikishi, Alundra Blayze, Larry Zbyszko and Kevin Nash. In addition, WWE has created The Warrior Award, which will be presented each year to someone who has exhibited unwavering strength and perseverance, and who lives life with the courage and compassion that embodies the indomitable spirit of WWE Hall of Famer, The Ultimate Warrior. The inaugural award will be presented to Connor Michalek, a passionate WWE fan who passed away last year from cancer. The Ultimate Warrior’s widow, Dana Warrior, and WWE Superstar Daniel Bryan™ will present the award to Steve Michalek, Connor’s father.

More than 70,000 fans are expected to converge on the Levi’s Stadium for WWE’s annual pop-culture extravaganza, WrestleMania 31 (#WRESTLEMANIA). Brock Lesnar defends his WWE World Heavyweight Championship against a Superstar on the rise, Roman Reigns.  After 14 years of anticipation, Sting steps into a WWE ring for the first time to take on Triple H. In his first appearance since WrestleMania 30, Undertaker returns to take on Bray Wyatt.  Plus, John Cena takes on Rusev for the U.S. Championship, and “The Viper” Randy Orton faces The Authority’s hand-picked face of the future, Seth Rollins. The stars of Total Divas, The Bella Twins take on the team of AJ and Paige, seven-men vie for the Intercontinental Championship in a ladder match, and 20-men will compete in the second annual Andre the Giant Battle Royal.

Grammy® Award winner and entertainment icon, LL COOL J, will appear in the video opening of WrestleMania, titled “The Showcase of the Immortals.” He previously appeared on WWE’s flagship television program, Monday Night Raw®, in March 2014 with his “NCIS: Los Angeles” co-star, Chris O’Donnell. LL, recently partnered with Rouse Social, a social media aggregate app that brings all your favorites in music and sports to one place. Next up, he can be seen hosting and producing the new show, Lip Sync Battle, on Spike TV premiering on Thursday, April 2.

The night after WrestleMania, Monday Night Raw comes to the SAP Center in San Jose, Calif. Fans can see their favorite WWE Superstars and Divas as the road to WrestleMania 32 begins. WrestleMania 32 will take place at the AT&T Center in Arlington, Texas on Sunday, April 3, 2016.