Gail Kim to receive a women’s award this April 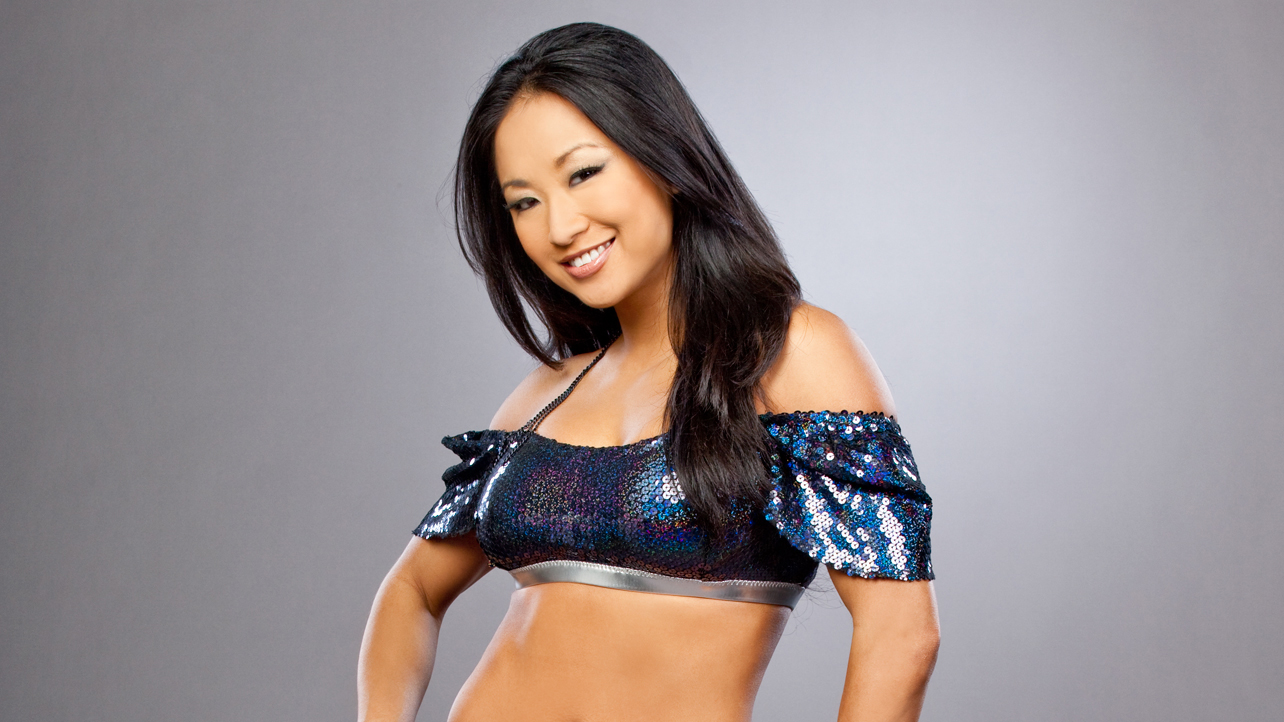 The Cauliflower Alley Club is pleased to announce that Gail Kim will be honored at the upcoming CAC Reunion with a women’s wrestling award!

The women’s wrestling award originated in 1996 and has a long-standing tradition of honoring the best female wrestlers of all time. This prestigious list includes the Fabulous Moolah, Judy Grable, Luna Vachon, Beverly Shade, Lisa Moretti, Molly Holly, Cheerleader Melissa, and many more. Gail Kim is certainly a worthy addition to this list, and joins Beth Phoenix and Malia Hosaka as part of 2015’s class of distinguished female honorees.

Originally of Korean descent, Gail Kim-Irvine is a professional wrestler, valet, model and actress currently working for Total Nonstop Action Wrestling where she is a 4-time TNA Knockouts champion. She also well-known for her work in World Wrestling Entertainment. Here is a snapshot of her great career to date [courtesy in part of Wikipedia.com]:

After obtaining her degree from Ryerson University, Gail Kim decided to become a professional wrestler and joined Ron Hutchinson’s “School of Pro Wrestling” in Toronto. She received supplementary training from Rob Etchevarria at the “Squared Circle Pro Wrestling Gym”. Gail debuted in December 2000, wearing a mask and wrestling as “The Queen of the Cats” La Felina in the Southern Ontario-based Apocalypse Wrestling Federation. Kim worked on the Canadian independent circuit for two years, wrestling for promotions such as Border City Wrestling.

Kim was introduced to World Wrestling Federation employee, and CAC women’s award winner, Nora Greenwald (Molly Holly) by Jason Sensation in 2001. Greenwald encouraged Kim to send her videos and tapes to WWF officials, which eventually led to her contract. In October 2002, she was hired by the WWF, now renamed World Wrestling Entertainment. She spent eight months training in Ohio Valley Wrestling and appearing in house shows and dark matches before being called up to the main roster. After several weeks of vignettes showcasing Matrix-like effects aired on Raw, Kim debuted on June 30 as a fan favorite, with a Matrix-inspired outfit.

In her WWE debut match, a seven-woman battle royal in Buffalo, New York on the June 30, 2003 episode of Raw with the WWE Women’s Championship, Gail Kim won the women’s championship, becoming the first WWE Diva in history to win a championship in her first match. Kim subsequently lost the title and then formed an alliance with Molly Holly to battle Trish Stratus, defeating her and various partners on several occasions, until she was later assisted by Lita. The four women continued to feud until November, when Kim was sidelined with a broken right collarbone. Kim returned from injury in 2004 and had successful feuds with Victoria, Lita, and Trish Stratus. However, Kim was released by WWE in November 2004.

After her WWE released, Gail Kim worked for several independent promotions, including Mid-Atlantic Championship Wrestling, where on January 22, 2005 Kim teamed with Lollipop to defeat fellow 2015 CAC honoree Malia Hosaka and Nidia in a tag team match. Kim joined TNA in September 2005. There, Kim aligned herself with Jeff Jarrett and America’s Most Wanted (Chris Harris and James Storm), working as their manager. After the dissolution of the group, Kim performed as a singles wrestler, eventually going on to become the inaugural TNA women’s Knockout champion, winning a ten-woman gauntlet match at TNA’s Bound for Glory in October 2007.

Gail Kim had several exciting feuds in TNA, but perhaps none better than against fellow CAC honoree Awesome Kong. At TNA’s Lockdown PPV event in 2008, she teamed with ODB to defeat the team of Raisha Saeed (CAC honoree Melissa Anderson) and Kong in a tag team match. She left TNA in August 2008 and then returned to WWE for several years.

Gail Kim made her WWE TV return on the March 27, 2009 episode of SmackDown, interrupting a WWE Divas Championship match between Maryse and Michelle McCool by attacking both competitors. Kim made her in-ring return on the March 30 episode of Raw on the winning team of an 18-Diva tag team match. She made her first WrestleMania appearance in the 25-Diva Miss WrestleMania battle royal on April 5, 2009 at WWE’s WrestleMania XXV. On the April 17 episode of SmackDown, Kim defeated then-Divas Champion Maryse. This earned her a championship match the following week, which she failed to win. Over the next several years Kim wrestled on many of WWE’s top stars such as CAC honoree Beth Phoenix, Lay-Cool, Melina, and the Bella Twins. She appeared on many pay-per-views, including WrestleMania XXVI in Arizona. She left WWE in August 2011.

Gail Kim once again returned to TNA, attacking TNA Knockouts Champion Velvet Sky and aligning herself with Karen Jarrett and Madison Rayne, thus establishing herself as a villainess. On the November 3, 2011 episode of IMPACT Wrestling, Kim and Rayne defeated Brooke Tessmacher and Tara to win the TNA Knockouts tag team championship. On November 13 at TNA’s Turning Point, Kim defeated Velvet Sky to win the TNA Knockouts championship for the second time, making her a double champion and only the second woman in TNA history to hold both the Knockouts and the Knockouts tag team titles at the same time.

At Lockdown that April, Kim defeated Velvet Sky in a steel cage match to retain her title. On May 20, Kim became the longest reigning TNA Knockouts Champion in history by breaking Madison Rayne’s previous record of 188 days. At Slammiversary that June, Kim lost the title to Miss Tessmacher, ending her reign at 210 days.

In 2012 Pro Wrestling Illustrated named Gail Kim the number one female wrestler in the world.

In 2013 Gail Kim had a great feud with Taryn Terrell. The rivalry culminated in a Last Knockout Standing match on June 2 at Slammiversary XI, which Terrell won. On the July 11 episode of IMPACT Wrestling, Kim defeated Terrell in a ladder match to become the number one contender to the Knockouts Championship. Though it took several months, that October Gail Kim defeated ODB and Brooke Tessmacher in a triple threat match to win her third TNA Knockouts championship. Gail Kim defended the title several times, but Madison Rayne defeated her that January to end Kim’s reign at 88 days.

Gail Kim then turned face and battled the Beautiful People for several months. On the June 12 episode of IMPACT Wrestling, Kim defeated CAC Future Legend honoree Brittany and Madison Rayne to become the number one contender to Angelina Love‘s championship. On the July 3 episode of IMPACT Wrestling, Kim would win the championship for a fourth time. Kim successfully defended her title against Taryn Terrell on the September 3 episode of IMPACT Wrestling, but after the match, Kim and Terrell were both attacked by the debuting HAVOK. That September Kim injured her shoulder during a pre-match brawl with HAVOK. Going against doctor’s advice, Kim defended her title later that night and lost her Knockouts title to HAVOK. Soon after it was announced that Kim had suffered a separated shoulder and torn ligaments and would be out of action indefinitely.

Kim returned to IMPACT Wrestling in November, however her shoulder was not fully healed. As a judge in the 2nd edition of the “British Bootcamp” she was victorious in a match against Kay Lee Ray. Gail Kim continues to be a star Knockout for TNA to this very day.

“Gail Kim is always reinventing herself, and reinventing women’s wrestling. She’s a true pioneer, an icon in the world of professional wrestling. Congratulations Gail. With all my love and respect, no one is more deserving than you!”

From CAC board member and former trainer Ron Hutchison:

“Having just received confirmation that Gail Kim will be honored alongside my fellow protégé’s Sinn Bodhi and Beth Phoenix at this year’s CAC 50th reunion I am overjoyed with emotion. Of course, I am thrilled for all of this year’s CAC Award recipients but I have to admit that I hold a special place in my heart for three of this year’s Class of 2015.

With the announcement of Gail Kim completing the trifecta and being honored with a CAC 2015 Active Women’s Wrestling Award I took a look at a short essay she wrote me 15 years ago to get into my wrestling school which I’d now like to share a piece of for the very first time, on this the occasion of her 2015 CAC Active Women’s Wrestling Award announcement.

In it she wrote:

Thank you for enjoying, pursuing and helping shape the future of professional women’s wrestling Gail. In 2001 I bragged in a Slam Wrestling article that you picked up the moves and psychology as quickly as any student that I had ever trained; male or female. In 2015 I can brag that all of those facts still hold true till this day! My sincerest congratulations to you on this well-deserved Cauliflower Alley Club Women’s Wrestling Award. A very special award for a very special lady. Looking forward to seeing you in Vegas!”

Congratulations again to Gail Kim, a 2015 women’s wrestling award recipient! It is truly an honor to have Ms. Kim attend the CAC’s 50th Reunion celebration in April to accept this award.

Watch some of Gail Kim’s career highlights below: