Home / Behind the Scenes / Goldberg on a possible ring return

Goldberg on a possible ring return 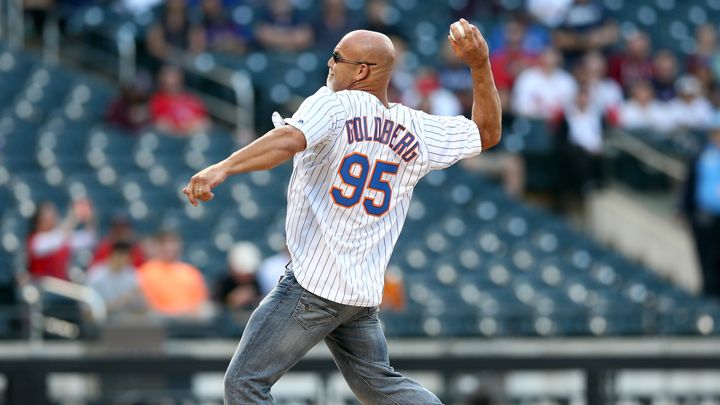 Sporting a custom jersey numbered 95, cheek bulging with a fresh lump of dip from the Mets clubhouse’s “special stash,” Bill Goldberg – or simply Goldberg to wrestling fans – is taking practice cuts beneath the baking sun at Citi Field, four hours before throwing the first pitch at tonight’s game. “There’s the funny moment,” he chuckles after the bat flies loose from his hands and down the first-base line.

Admittedly, the 48-year-old former WCW/WWE World Heavyweight Champion and NFL defensive tackle (not to mention actor and aspiring kickboxer – more on the latter in a bit) doesn’t seem most at ease inside a batting cage. Then again, he wasn’t the quickest study inside a squared circle either, and that didn’t stop him from translating sheer physicality and charisma into a singularly iconic – albeit relatively brief and undeniably polarizing – career between the ropes.

That legacy is why Goldberg, all due respect to his seasons with the Atlanta Falcons and recent gigs as MMA color commentator and TV host, is here today. More to the point, it’s why he’ll be a featured attraction this coming Sunday at Citi Field when the Mets’ hospitality group hosts Legends of Wrestling, an event featuring an impressive roster of active and retired talent – Bret Hart and Ric Flair will be in attendance, and the likes of Scott Steiner, the Nasty Boys and Ken Anderson will step into the ring.

It’s that same legacy he and I sat down to discuss just prior to his aforementioned batting practice session. That, and whether he cares what anyone but Bill Goldberg thinks of Bill Goldberg (nope), the odds of him putting on a pair of wrestling trunks one more time (pretty good, sorta) and, if he does, who’s next.

Does doing an event like this suggest you maintain respect for wrestling fans’ passion?

It does. It’s my opportunity to thank them for making me who I am in the wrestling world. I get very few chances to do that. And to hopefully make new Goldberg fans.

Speaking of, you’ve teased a return in some form to the ring. Would that be at this kind of exhibition or perhaps an emerging promotion like Global Force Wrestling?

When I was speaking of that, I wasn’t speaking of my correlation with any organization. This is an event I’m gonna put on myself. Not in association with Global Force or anyone. It’s an opportunity I’ve been given through a number of influential people to fulfill a dream of mine – to let my son watch me wrestle. I don’t want anybody telling me what to do in any capacity anymore. Therefore, I’m gonna do it on my own.