Home / Information / DVD Reviews / KayfabeCommentaries.com DVD Collection / My Side of the Story – Tito vs. Greg

My Side of the Story – Tito vs. Greg 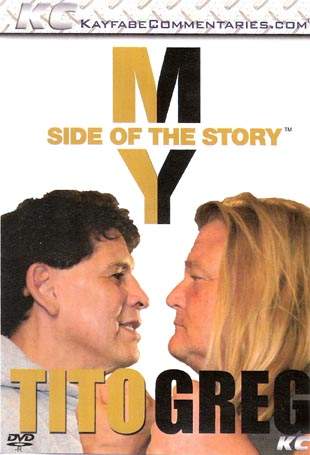 MY SIDE OF THE STORY
Tito Santana vs. Greg Valentine

Description: KayfabeCommentaries.com has done it again – director Sean Oliver brought both sides of one of wrestling’s most famous rivalries together to put a unique spin on the often over-done shoot interview.

While Vince McMahon and Hulk Hogan hogged the spotlight and took all the credit during the 1984 World Wrestling Federation expansion, guys like WWE Hall of Famers Tito Santana and Greg Valentine were busting their asses and earning the respect of the fans through hard work and dedication to their craft. Santana and Valentine were engaged in a bitter feud over the prestigious Intercontinental championship, and they headlined events in every major city across the United States for about fifteen months straight, selling out many of those venues WITHOUT the support of WWF Champion Hulk Hogan on the card. Their heat was real, and it didn’t have to be manufactured by the office. The fans went to the matches expecting an epic battle and got their money’s worth every single time – and this brought the fans back month after month, no matter what city they were in. On a personal note, one of my fondest memories as a child was watching the WWF Coliseum Home Video featuring Tito Santana and Greg Valentine in their legendary steel cage match. The finish was one of the most memorable moments in WWF history, and left an indelible mark on my otherwise very impressionable psyche. It featured Tito climbing over the top of the cage and kicking the cage door into Valentine’s face, preventing him from exiting the structure. Santana became Intercontinental champion that night, and that breathtaking moment became one of maybe a handful of factors that inspired me to become a life-long fan of pro-wrestling.

In this video, you will see the two individuals separated and given the same line of questioning – their answers edited together to present the full spectrum of the story they are trying to tell. It’s interesting to note sometimes how different (or how similar) their answers to certain questions are. You can forget about second hand stories, this is all straight from source, from the two guys who lived it and made it such a big part of their legacies. After being grilled individually, you will witness a brief reunion of the two wrestling legends, and hopefully notice the respect each man has for the other. I find these Kayfabe Commentary interviews very fascinating – to have the opportunity to step inside the minds of these people, my heroes, is truly an honor and a thrill. I’m sure you will feel the same way after you go to www.KayfabeCommentaries.com and check out all the great content and merchandise they have available!

My Side of the Story

Description: Ever wonder the backstory to your favorite pro wrestling feud? Well the guys over at www.KayfabeCommentaries.com are giving fans the chance to find out. They have created a series of DVD’s entitled MY SIDE OF THE STORY. This review covers the 1984-85 feud between former WWF Intercontinental champions Tito Santana and Greg “the Hammer” Valentine. Unlike other shoot DVD’s where the subject is a singles or tag team who is quizzed about their career, this DVD sits the two men down and asks them the same questions in separate interviews and editing them in sequence. After the interviews are over, Santana and Valentine were brought together for more questions.

The interview begins with how the two men first met when they worked for the old Charlotte/NWA territory in 1979 and it follows them to the WWF of the early 1980’s when Vince McMahon was beginning to expand his promotion across America. Both men praise booker George Scott in creating the feud by using Santana legit knee injury as the catalyst to get all the heat and the IC title on Valentine. They walk the viewer through the feud from Santana’s return a month later in MSG and the style of work they used in the ring which according to Valentine was stiff but snug. Both men are sincere when they heap the praise on each other for their work rate and their desire to keep the feud going, even wanting to sell out events that WWF World Champion Hulk Hogan wasn’t booked on. The famed cage match in Baltimore where Santana won the championship back is covered in detail event to the ending where Santana slammed the cage door on Valentine’s head. Their promo styles are also shown off and the best question I felt was did they think the feud would work in the eyes of the fans if Valentine was the babyface and Santana was the heel.

The DVD is a must have for all wrestling fans and it includes a sixteen page booklet with information on the matches talked about on the DVD. Remember to log onto www.KayfabeCommentaries.com where the order price is $20.00. You can also check out other releases with Kevin Sullivan, Missy Hyatt, Honky Tonk Man, Gabe Sapolsky and JJ Dillon.