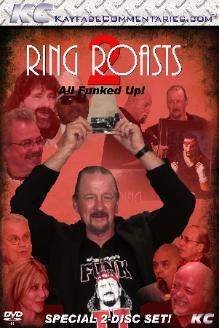 Upon watching the latest DVD release from Kayfabe Commentaries, I had to ask myself the following question; why did it take the world of professional wrestling so long to embrace the roast concept. It seems like a perfect fit for all the unorthodox characters that wrestling has to offer.

The comedic ROAST goes way back the golden era of Hollywood, where celebrities would gather for black-tie banquets to both praise and embarrass the heck out of a colleague. For some people it would be a nightmare come true, but in the best case scenario, it is truly an honor to be roasted.

Recent roasts featured on Comedy Central (correct me if I’m wrong) featured Pamela Anderson, William Shatner, Flava Flav, and Jeff Foxworthy. Anybody who has seen these TV programs knows just how brutally offensive the content can get; so if you don’t have thick skin, don’t stand too close to the barbeque.

It was a night of ups and downs, with each guest speaker taking the podium and saying a few words about everyone else. The three comedians were especially vulgar, and managed to make a couple of the old-timers a little uncomfortable with their insensitive profanity-laced jokes. King Kong Bundy, who actually does a little stand up comedy on the side, was surprisingly terrible (not funny). Dennis Stamp was grilled for being boring, but got a standing ovation after delivering a heartfelt tribute to the Terry Funk. Missy Hyatt had perhaps the funniest speech of the crew, which led me to believe that somebody else wrote it, or she stole it from someone on the panel. Superstar Billy Graham has slowed down physically and verbally over the years, but brought the room to tears when he presented Funk with a very special gift from the heart. Mick Foley was on loan from TNA, and I’m sure TNA put in a clause that TNA not be roasted (because there is a lot of material available). Missy Hyatt was the only one brave enough to make a negative comment about TNA’s ratings. JJ Dillon also provided the fans with a nice story about Italian bread with a hilarious punchline. New Jack was a ticking time-bomb all night long, but managed to suck it up and offer up a pretty touching tribute to Funk. Mike Graham, Kevin Sullivan, and Kevin Von Erich also spoke respectfully about the Funker, opting to honor the man for being a great wrestler as opposed to telling unpleasant jokes. It ended up being a good mix of vulgarity and sentimentality.

Here’s hoping there are more roasts in the future. That, however, begs the question; who else is man enough to be roasted in public by their peers? Off the top of my head, I would suggest maybe Tommy Rich? Missy Hyatt? Ric Flair! Maybe not Flair. What do you think? Let us know.

Check out what Kayfabe Commentaries has to offer at www.KayfabeCommentaries.com today!

Last year Kayfabe Commentaries held a Ring Roast for the former WWE star the Iron Sheik. It was a DVD success thanks to Scott Hall being drunk and a rumored staged slap from the Sheik to the face of Brian Blair. So how do they top it? By putting a true legend on the Roast platform, former NWA World Heavyweight champion & “Hardcore Icon” Terry Funk. Ring Roast 2 is labeled as All Funked Up and its 2 disc of laughs, tears and thankfully no one slapping anyone…well there are plenty of verbal slaps.

Wrestling magazine legend Bill Apter once again hosts if you call what he does hosting. Here’s the who’s who that addressed Funk & the fans: comedians Ryan Maher, Matt Bridgestone & Sean Morton, part-time comedians King Kong Bundy & Mick Foley with wrestling legends & personalities Kevin Von Erich, Dennis Stamp, Kevin Sullivan, “Superstar” Billy Graham, Missy Hyatt, JJ Dillon, Mike Graham and New Jack. Like last year the comedians went for cheap shots at the panel and anyone else in wrestling they could hitting and missing. Maher takes his life in his hands joking about New Jack and enjoy the squirming on-camera. I gave the title of part-time comedians for Bundy & Foley since they still are somewhat active in wrestling & to be honest Bundy really wasn’t funny. There could have been fireworks with New Jack’s golden tongue but to the surprise of many, he kept in check praising Funk as someone who molded his career. All of the wrestlers gave stories of their interactions with Funk and took some shots at each others. Stamp will make you be close to tears talking about Funk’s charitable contributions in and out of wrestling. Hyatt lived up to her reputation she seems to enjoy (if I have to explain you’re not a wrestling fan.) If you liked the Sheik’s DVD then buy this one..if you don’t understand the concept of the DVD avoid it and look forward to the next Kayfabe releases like Guest Booker: Mike Graham and Missy Hyatt’s Pajama Party which can be pre-ordered through www.kayfabecommentaries.com

Kayfabe Commentaries strikes back with their second installment of “Ring Roasts,” this time roasting a true Hall Of Famer in the sport of professional wrestling…none other than “The Hardcore Legend,” Terry Funk. For nearly three hours, you will be entertained by the humor, as well as emotion of a great panel of wrestling legends & professional comedians, as they pitch in their stories in regards to the man from “The Double Cross Ranch.” Sit back and enjoy the love, the humor, the rudeness, & the raunchiness from a slew of panelists, as they make this tribute to Terry Funk a night to remember.

This two-disc set is very easy to follow, as everything is heard & understood clearly, which is important for the viewer. There are multiple camera shots with the hard cam, close-up cam, & stationary cameras that try to bring to you as much of this event & the circumstances throughout as best they can. At no point should you the viewer ever get lost as to what is happening. The work put together is done very well.

Sean Oliver introduces a panel consisting of the ring roasters & comedians as they take to their seats. Roasters ranged from comedians Matt Bridgestone, Ryan Mahr, & Sean Morton to Terry’s wrestling allies (in the form of King Kong Bundy, Mike Graham, New Jack, Kevin Von Erich, Dennis Stamp, Kevin Sullivan, JJ Dillon, Missy Hyatt, “Superstar” Billy Graham, & Mick Foley). Bill Apter hosed the event, and although there were some uneasy interruptions by a drunken New Jack, everything went great & exactly as a roast should. This strong dias group here no doubt had some controversial & hilarious stories about the other members of the panel and seemed to only show true love & praise to the man they all admired in Terry Funk. Even New Jack, who was simply obnoxious at many instances of the event, showed Terry high praise & respect…despite being a terror to almost anyone else in the room. Some great moments you will see contained in the DVD include: a rare appearance from Kevin Von Erich (with some great stories about how Terry taught everyone so much that they know in professional wrestling), Dennis Stamp telling us all touching Terry Funk moments with unfortunate children, J.J. Dillon sharing his initiations in Amarillo, TX while breaking into the business, & “Superstar” Billy Graham with touching stories & giving Terry a beautiful painting as a gift. The dias came out in strength this year (as opposed to last year), and one of the strongest, most prepared ones on the panel was the one who got ripped to shreds the most throughout the evening. When Missy Hyatt took the stage, she tore it up & delivered the most unexpected, well-prepared comedic rips into everyone that will have you all in stitches. And the final dias was Mick Foley, and he indeed paid tribute just so perfectly to one of his most loving mentors & let Terry end the evening fully appreciative of the evening’s festivities.

Unique & unordinary, if you like wrestling & comedy and have a very open mind to accept foul & insulting language, then “Ring Roasts” is an absolute must. See a different side & fascinating presentation to a true wrestling legend in a great event.

Buy this. This is another great concept done well & given to you the viewer in a true atmospheric setting as if you are sitting in the audience. Even if you don’t like it when it is done, you will still want to show someone else what the hell you just saw. Sit back & watch with laughter, as you will see some of the most hilarious moments at this unique event.

Sean Oliver & Kayfabe Commentaries continue to push their own innovations for the real wrestling fans, and they should be commended for plenty of the fine work that they have done. Not many other people out there have come up with successful settings in creating unique events when it comes to organizing events within professional wrestling, yet Kayfabe Commentaries & their group continue to plan out and produce some incredible events & great DVD’s for the wrestling community. To purchase “Ring Roasts II: All Funked Up — A Comedic Tribute To Terry Funk,” head on over to www.KayfabeCommentaries.com.