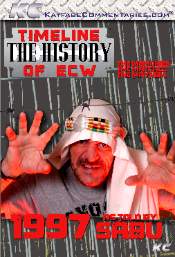 Kayfabe Commentaries does it again; you know Kayfabe is dead when Sabu sits down and tells all about what happens inside the business that his famous uncle, the Sheik, protected until the very end. KC took a break from its highly praised History of the WWE series to jump on the ECW money train. History of ECW debuts with Sabu taking a trip down memory lane and talking about all the gory details of the most extreme wrestling promotion on the planet in 1997. ECW was the birthplace of extreme, and any time you see a unique weapon or hardcore spot in today’s scene, it was probably invented in an ECW ring back in 1997. Pretty cool stuff as always, but if you’ve been following my KC DVD reviews, you already know this!

Check out the growing collection of DVD’s at www.KayfabeCommentaries.com