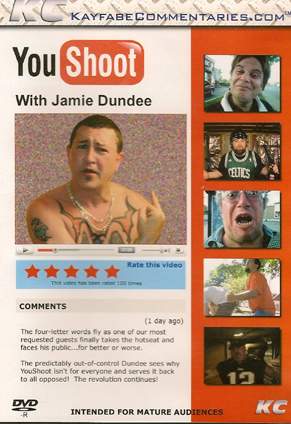 Kayfabecommentaries.com has a tremendous track record for putting out really fun DVD’s that put an unusual twist on the traditional shoot interview.  So far, YouSHOOT interviews with Honky Tonk Man, Missy Hyatt, and the Sandman have taken some pretty salty characters and put them in the hot seat for a series of no-holds-barred questions submitted entirely by the marks – I mean ‘fans!’  If you are one of the hundreds who submitted questions, don’t be mad, I am one of those marks too.  The next lucky subject to step up the plate is Jamie “J.C. Ice” Dundee, one half of the tag team known as PG-13.  A pair of skinny hip-hop punks who gained fame for being glorified jobbers in nearly every single wrestling promotion in operation during the 1990s.  They did attain some success in a few of the Southern territories.  Jamie is also famous for being the son of “Superstar” Bill Dundee.  I had to explain all of that because I figure it’s possible 50% of the people reading this review may not have a clue who the heck Jamie Dundee is.

Sometimes it really pains me to speak negatively about a product that has provided me with so much positive entertainment.   Here comes the pain.  I was never a big fan of PG-13; they never did anything for me, but as usual I sat down with an open-mind hoping (praying) to be pleasantly surprised.  The fact of the matter is,  Dundee did not impress me in this interview.  I mean, he said a whole lot, but didn’t really say anything at all.  It was basically 2+ hours of objectionable language, padded by a whole bunch of over-the-top claims like taking credit for the success of everything from Public Enemy to John Cena.  Your jaw will drop when you hear Jamie’s answer to the question, “where did Randy Savage find Elizabeth?”  It seemed like half of the questions were about his way-more-famous father, the controversial Bill Dundee.

If you are a fan of drinking games, here’s a good one for you.  Buy this DVD and watch it with some of your friends.  Then take a drink every time Jamie Dundee leans over and kisses moderator Sean Oliver.   You’ll be drunk by the half way mark.  Take a shower, Sean.

I heard that a previous Jamie Dundee shoot interview became very popular with many fans.  I guess it’s entirely possible that I just don’t “get it” and other people will dig it more than I do.  If you purchase all of the Kayfabe Commentaries home releases, then go ahead and buy this one and enjoy it on the same level I did.  If you’re not familiar with other KC selections, then do yourself a favor and buy anything from the Guest Booker series (Kevin Sullivan, Gabe Sapolsky, JJ Dillon, Raven, Gary Hart) or anything else by Kayfabe Commentaries.

He’s a cocky, brash, beer drinking and pot smoking second generation star who doesn’t have a censor button on his mouth. Jamie Dundee is the prefect candidate for the next installment in Kayfabe Commentaries YouShoot DVD series. If you have never seen a You Shoot its simple: all the questions asked come from emails & videos sent into the KC website and are delivered by host/producer Sean Oliver.

Let me be honest I have never been a fan of Dundee’s work. This DVD was more entertaining for the fun of watching Oliver squirm in his chair waiting for Dundee to pounce on him. One minute Dundee is praising the person who sent a question, the next he is threatening to drive to their house and beat them down. Oliver tries to follow a format in the questioning following Dundee from growing up in the Memphis/Nashville territory to working for USWA in the PG-13 tag team to the WWE with the Nation of Domination. Also in the mix are odd jobs, depravity in life & a topic on fellow wrestlers past and present. While Dundee does oblige in the questioning he seems more focused on getting messed up on beer. He veers off into working in the circus with his dad, who in the business screwed him over, who is the hottest diva and does tell some great stories. But I will wait for the next KC DVD to give a positive review. I will give one if you are a fan of Dundee’s other shoot interviews because is unique.

According to their website, www.kayfabecommentaries.com the two next releases are a Guest Booker DVD with Greg Gagne and a My Side of the Story release with Magnum TA and Nikita Koloff.

What can you say about Jamie Dundee? As one half of PG-13 with Wolfie D, the former JC Ice & son of wrestling legend “Superstar” Bill Dundee opens up on everything thrown at him in this wild & funny slobber-knocker. Fueled by any cold beer he can get his hands on, Sean Oliver hosts the latest shoot interview where the fans bring up all kinds of topics, and Jamie throws out all the answers in the way he remembers the stories. A lot of this does indeed have much discussion about his father (Bill Dundee), as there are some off the chart stories about much of the heart of Southern Wrestling and growing up in his fathers shadow. But Jamie hit all the big leagues. All of the questions covered by the YouShoot fans ask Jamie about anything, and he has no sympathies towards anyone.

Very Basic, one camera shot angle with no camera close ups or anything special. At one point, Jamie & Sean are showing on their internet monitor a riot that took place at a show, and all you get to see is their reaction to it & the back of the monitor while they watch. You’d figure when they would insert the fans on screen at the bottom asking the questions throughout the DVD that you could get a little bit of viewing of this riot while they were discussing this for a few minutes, but the viewer is left disappointed and just thinking to themselves about it instead.

Clear & crisp commentary during the shoot, with everything understood which is a huge plus. Dolby Surround in two channels. Very accurate sound & fun to listen to.

Not much to this at all but the closing credits have a lot of the funny stuff off-camera where Jamie is drunk & acting up — which is kind of funny in a way, but nothing special. Still worth checking out. Inserting all the questions & footage of the fan asking them was nice, but it also showed the embarrassing notion of some fans that act obnoxious as well in their clips. The questions were text inserted on the screen during every question, which was nice to see. The interview was also chaptered very nicely, with each topic headlined for discussion.

For two+ hours, listen to Jamie discuss with Sean Oliver about….

*His family ties in the business

*When Randy Savage & Bill Dundee met in a parking lot

*The promotional wars in the south

*Samantha Pain and how she was involved

*How Jamie left the set while shooting a Robert Redford movie

*His involvement in the Jerry Springer Show

*The legit story of him running a daycare at his home (yes, this is true)

*How low his WrestleMania 13 payoff really was.

*Plenty more, that are some of the basics. I will definitely say that there is a lot of stories, and any longtime fan that followed his days in the sport will listen to all kinds of interesting things within this DVD.

I can definitely refer you to plenty of other Kayfabe Commentaries interviews that would interest many of the viewers a lot more than this one, but it is what it is. Jamie has been a part of this sport all his life since he was a kid and he worked in every major territory back in the day. He knows a lot of people and has seen a lot of things. He drinks a lot, gets obnoxious, & lets loose on anything. He won’t let you down.

Don’t pass it up as a fan, but if you had the entire line of DVD’s from Kayfabe Commentaries to choose from, and you had to only select one title, I would think this would not be the one for you to grab.

I think that Jamie just needs to get his life together more and lay off the drinking & drugs. He still can go, has the talent, & is a veteran that can be a major asset to any group, but he just needs to grow up and become a little more of an adult. I know it is part of who he wants his character to come across as, but this is also a case of who this guy really is…which in two hours is still very evident.

“YouShoot” from Kayfabe Commentaries with special guest Jamie Dundee is still a great job. Sean Oliver & his group continue to produce exactly what the fan wants to see, and in this case, it is the fans asking any question to Jamie Dundee. Nothing fancy, nor was there ever any intention, this is a shoot interview that still delivers like most all of them do.

www.BBrownVideo.com: For the quickest, the fastest, & for top-notch productions! For all of the best analysis from the world of professional wrestling & sports-entertainment, plus the best weekly interviews w/your favorite superstars, log onto www.MondayNightMayhem.com (presented by: Sweet Sunshine, the official finishing sauce of The Mayhem).