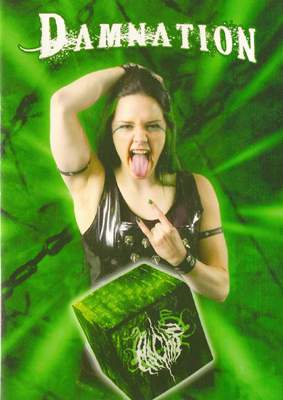 MsChif vs. Jetta (ChickFight 8): This was quite a match. It was Jetta’s chance to prove that she is one of the top female wrestlers in the UK. Wearing pink and black from head to toe, Jetta stretched MsChif repeatedly, building her confidence along the way. What she didn’t realize was that MsChif is one of the most flexible people on the planet, not to mention having an unbelievable threshold for pain. MsChif survived the onslaught and turned the tables, forcing Jetta to submit to her own submission maneuver.

NWA Midwest Women’s title match – MsChif vs. Daizee Haze (CSW): MsChif and long time nemesis Daizee Haze traveled to their home state of Missouri to rekindle their feud in the Central States Wrestling promotion. With the Haze’s coveted NWA Midwest Women’s title on the line, the two lady grapplers obeyed the rules of traditional wrestling, for the most part, until the final moments when it started to get a little stiff. MsChif was disqualified for using the dreaded green mist on the Haze right in front of the referee…

MsChif vs. Daizee Haze vs. Lacey vs. Ashley Lane (April 19, 2008–Ring of Honor): Nobody does it like Ring of Honor; the atmosphere is unmatched by any other independent promotion. This was one of Lacey’s final matches before retiring. She had recently left the Age of the Fall, but was still wearing the colorless Goth ring gear and still carries the enormous chip on her shoulder. Lacey was engaged in a bitter feud with Daizee Haze at the time. Mid-way through the match, Lacey blew out her knee and tagged Ashley Lane into the match. Of course, when Lacey was tagged back in she had miraculously recovered from her knee injury. MsChif did an amazing leap off the top rope to the floor, taking out all three of her opponents. MsChif finished off Ashley “the sacrificial lamb” Lane with the Desecrater for the victory!

MsChif vs. Amazing Kong (April 7, 2007–SHIMMER Volume 9): MsChif bravely stepped into the ring with Amazing Kong when it seemed like no one else would. Kong had a history of dishing out pain, and MsChif has the highest threshold for pain – so this has created an interesting dynamic between these two unique fighters. MsChif faired pretty well for a while but found herself up in the torture-rack being forced to kick herself in the back of her own head! Kong then hit a psychotic missile drop-kick from the second rope and went for the top rope splash – MsChif tried to move by rolling onto her stomach but Kong still landed right on top of her (I’m unsure if that was the way it was planned or not). MsChif made an amazing come-back after that, with the fans up on their feet chanting “this is awesome! this is awesome!” Amazing Kong kept nailing various finishing moves but MsChif kept kicking out. MsChif was mercifully put out of her misery with a Tornado Power-bomb in the middle of the ring. Unbelievable match.

MsChif vs. Yoshiko Tamura (June 24, 2006–APW): If you’re not a fan of Yoshiko Tamura, then you obviously have never seen her wrestle. I have watched a couple of her matches and I became an instant fan from the moment I laid eyes on her. She is a sensational talent imported from Japan, taking part in the ChickFight phenomenon in California. It was an excellent match for both competitors that I know you will enjoy from bell-to-bell…

Falls Count Anywhere Match – MsChif vs. Amazing Kong (NWA No Limits): MsChif and Kong created enough carnage in a regular match at SHIMMER, how much damage do you think they could do in a no-holds-barred Falls Count Anywhere match? Kong put her NWA World Women’s title on the line on this night. They bashed and crashed all over the arena in front of about 100 screaming fans. MsChif went toe-to-toe with the powerful Kong, but one Amazing-bomb through a table put MsChif down for the count! The fans showed their appreciation with a “Thank you, MsChif!” chant after it was all said and done..

Falls Count Anywhere Match – MsChif vs. Cheerleader Melissa (Pro Wrestling Revolution): PWR has some pretty incredible production values, and I’m guessing it’s the same guy who does the amazing ChickFight DVD production. Southern California was treated to a great match between these two grappling beauties. Melissa whipped herself into phenomenal shape during the last part of 2008, not that she wasn’t in great shape before – she’s just a lot leaner now. I would never be so bold as to say she was looking really hot, out of fear that I might get my butt kicked by one of two people. So I WILL NOT point out the obvious. Anyway, these two share tremendous chemistry with each other, and it doesn’t matter what promotion they are in, it is a sure bet that you’ll get your money’s worth. The insanity broke loose as these women beat the living heck out of each other all over the building, leaving a trail of craziness behind them. They took it to a whole other level when the action spilled out the doors onto the front lawn of the venue. There’s nothing better than a couple of hot/tough chicks fighting under the stars. Eventually they came back into the building and cleared the bleachers as MsChif dragged the Cheerleader around by the hair. Fans scattered as Melissa mounted a come-back and flung MsChif into a bunch of folding chairs. Melissa set up a chair structure, and tried to suplex MsChif onto it. MsChif countered and whipped Melissa into the barricade. MsChif went for the green mist, but inadvertently spewed it on a ringside attendant, who sold it like he was blinded for life! The girls climbed back into the ring for a little exercise in traditional wrestling. MsChif hit her finisher, but Melissa kicked out. Melissa recovered and the involuntary contorting began as Melissa twisted MsChif into several unnatural positions. Unfortunately, Melissa got a little carried away and was disqualified. MsChif left California with her NWA World Women’s title in tact.

Check out these selections exclusively at www.mschif.net