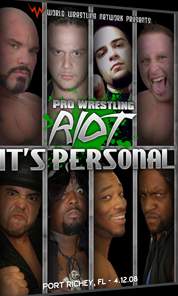 INTRODUCTION: If you didn’t see the previous Pro Wrestling Riot DVD, you might not understand why things have gotten so personal between PWR fan-favorite Sideshow and Ron Niemi’s mega-heel stable 911 Inc.. Before you continue reading this DVD review, do yourself a favor and read my review of the Declaration of War DVD to see what happened at the end of the Sideshow/Santee vs. 911 Inc. tag team “I Quit” match.

IN THE RING: The leggy Amy Vitale escorted Austin Andretti to the ring, where Vitale declared that she fired Logan Fernandez, and that Scott Commodity injured his back while carrying the team. Vitale said she was sick and tired of associating herself with such losers (yelling directly at Andretti). Vitale ordered Austin Andretti to step up his game! Vitale set up a VIP gauntlet so Andretti could prove himself…

SINGLES MATCH
Jon Davis vs. Sedrick Strong: Jon Davis had an amazing match with Erick Stevens at Declaration of War last month. Meanwhile, Sedrick Strong had the honor of teaming with New Zealand’s Bushwhacker Luke in a six-team RIOT Warfare match – so now it was time to get back down to business. After a long competitive match, the fans popped when Strong picked up the victory after a spine-tingling spear!

TAG TEAM MATCH
The Heartbreak Express (Sean & Phil Davis) vs. The Lifeguards (Daron & Wade): How many tag teams can go out to the ring wearing pink and purpose while billing themselves from “every woman’s dreams?” These two teams are very familiar with each other, but this would be their first 2-on-2 encounter in Pro Wrestling Riot. There was some strong heat with the local fans getting very into this match, which was your typical independent tag team match. The heel team of the Heartbreak Express squeeked out a victory when it was all said and done!

ANYTHING GOES MATCH
The House of M’s Damballah (w/George Martel & Lou The Fixer) vs. Eddie Taurus: Damballah is so grotesque that he could play a monster in a horror movie without the help of a make-up artist. I personally don’t see any real value in him as a pro-wrestler, except to give a guy like George Martel a job as a manager to talk for him. He was taking on one of Florida’s favorite wrestlers, Eddie Taurus. I’ve said it before and I’m starting to feel bad about saying it again, but Taurus is your typical indy wrestler with absolutely zero chance of advancement in the wrestling business. He is popular in his home region, but couldn’t survive elsewhere (in my opinion). Damballah was quick to introduce some weapons into the match, desperately trying to mask his lack of actual skill. Taurus has had many problems with the House of M, and I can’t help but wonder why nobody has stepped up to help the poor guy fight the evil faction. He had to deal with George Martel & Lou The Fixer’s outside interference as well. Eventually he had enough of the insanity and took out Lou The Fixer with a crazy dive over the guard rail into the second and third row! After some awkward stalling, Damballah flashed Taurus’ face with the dreaded ball of fire! He followed up with an elbow drop on the chest of Taurus and scored the 1-2-3 to end the misery! Damballah continued the assault with a nerve hold after the bell until several officials ran down to check on the fallen hero.

SINGLES MATCH
Team Vision’s Kenny King (w/Chasyn Rance & Mister Saint Laurent) vs. Jaison Moore: Kenny King is being groomed to be 2009’s breakout star, and there are various Florida promotions who are embracing him as such. Every time he comes out he makes it clear that he doesn’t need Team Vision to beat his opponent – whomever it may be. So he sent Chasyn Rance & Mr. Saint Laurent backstage so he could go one-on-one with Jaison Moore. The last two times these two faced each other, Moore left with his hand raised after some fan-friendly interference from the outside. Despite this unrealistic track record, this wasn’t exactly an even playing field as far as I was concerned. King was put in the position, once again, of having to make a less experienced wrestler look good. King eventually won after a long (too long) match and celebrated like he just won the main event at WrestleMania!

TAG TEAM MATCH
Bumz R’ Us (Ray Beez & Mr. Milo Beasley) vs. Team Vision (Chasyn Rance & Mister Saint Laurent): I love the Bumz gimmick, and now they have a busty blond escorting them to and from the ring so that doesn’t hurt either. The notion that two scrubs from the street would wrestle for money is strangely realistic. Beez pushed his cousin Beasley out to the ring in a wheel-chair, where God miraculously granted him the use of his legs for the duration of the match. Beasley has also gone from begging for money on the street to being suddenly rich. So why don’t they buy new ring gear? Late in the match, Beasley did a weird jump over the top rope and fell backwards bashing his head on the guard rail. It looked sick, but probably not bad, but Beasley immediately sold it (good for him). Suddenly the referee was distracted by George Martel and the House of M coming down the isle. Team Vision dumped Ray Beez over the top rope and celebrated. Beasley jumped in and threw a chair at MSL, and punched it to make a loud sound. Beasley “played dead” and the referee turned around and assumed that MSL hit him with a chair so he disqualified Team Vision. The Bumz “pulled an Eddy.”

LOSER LEAVES TOWN TAG TEAM TABLES MATCH
Sideshow & Bruce Santee vs. 911 Inc. (Kory Chavis & Francisco Ciatso): 911 Inc. was without their leader, Ron Niemi, but still had a clear goal in mind – humiliate and destroy Sideshow. For Sideshow, his issue with 911 Inc. got personal when Danielle (Sideshow’s sister) was viciously power-bombed through a table by 911 Inc’s Shane Twins. Niemi and the Shane Twins were all banned from the building due to their actions. Late in the match, Kory Chavis and Bruce Santee ended up fighting in the parking lot. Suddenly, one of the Shane Twins was spotted in the arena dragged Danielle around by the hair! Sideshow saw what was happening and lost focus. Then Jon Davis showed up and attacked Sideshow from behind. Chavis and Davis, collectively known as the Dark City Fight Club, took Sideshow and planted him with their finisher. Todd Shane continued to choke the life out of cute innocent Danielle at ringside. Ciatso ordered the Fight Club to double Awesome-bomb Sideshow over the top rope through a table on the floor! 911 Inc. was declared the winners of the match, which means Sideshow must leave Pro Wrestling Riot for 90 days.