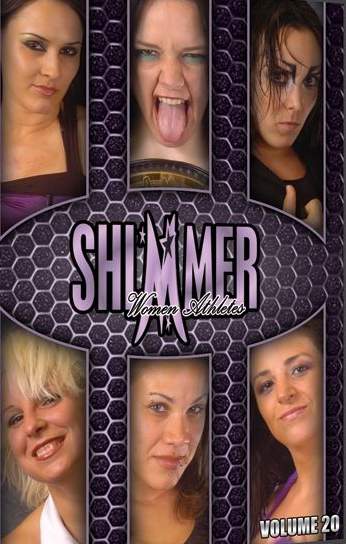 SINGLES MATCH [ WATCH ONLINE ]
Shark Girl vs. Veronika Vice: Newcomer Veronika Vice is a hot brunette from British Columbia who grew up in the business with Nicole Matthews. Vice’s singles debut was against the charismatic Shark Girl (Daffney Unger’s alter ego from the world of anime). Announcers Dave Prazak and Allison Danger pointed out that eight of the twenty-two members of the SHIMMER roster are Canadian! G-oh Canada! This Canadian had a good outing, but it was Shark Girl who had her fin raised in victory.

TAG TEAM GRUDGE MATCH [ WATCH ONLINE ]
Allison Danger & Jennifer Blake vs. The Canadian Ninjas (Portia Perez & Nicole Matthews): This match pitted two teams from the North, battling it out to see which Canadian combination was “frickin’ awesome.” God bless Portia Perez for helping Nicole Matthews come out of her shell. Perez came out and claimed that she was the master of avoiding the body-slam! Danger came out and predicted that she would body-slam Perez within the first minute of the match! Perez was willing to bet $1000 (Canadian) that she couldn’t. Danger and Perez started the match, and Perez backed up her claim by surviving the first sixty seconds without being body-slammed! “Girl Dynamite” Jennifer Blake was great in a supporting role, understanding that the focus was to be on the Danger-Perez feud. This felt like an indy-style tag team match, as opposed to the heated DVD rivalry it was built up to be. It didn’t get heated until the finish, which saw Portia force Allison to tap out with the Fujiwara Arm-bar. Perez refused to release the hold, and re-injured Danger’s collarbone. Nicole Matthews distracted the referees so that Perez could nail Danger with the Divorce Court, another devastating hold that targets the shoulder and collarbone!

SINGLES MATCH [ WATCH ONLINE ]
Amazing Kong vs. Danyah: It was feeding time, and Amazing Kong was in the mood for a little Canadian cuisine. The fiery newcomer, Danyah, who is an extremely fit athlete from Ontario, desperately tried to survive this match. Kong does a good job making her opponents look good as she is demolishing them. Danyah tried her best, but she was finished off bit a Sit-out Power-bomb. I think I heard Kong burp as she left the ring area..

SINGLES MATCH [ WATCH ONLINE ]
Daffney vs. Cat Power: Apparently Daffney is pulling double duty in SHIMMER now, having already wrestled as Shark Girl in the opening contest. I just hope she got paid twice! Even though she is a heel with limited experience, I still think I love Cat Power. She is from my home province of Nova Scotia, but they are claiming that she is from Windsor, Ontario. Finally a young rookie got a victory, as the Cat used her power advantage to make Daffney submit with a Figure-4 Leg-lock! Woooooo!

SINGLES MATCH [ WATCH ONLINE ]
Nikki Roxx vs. “The Portuguese Princess” Ariel: Here’s a couple of old rivals from the Boston area who have spent the last few years as both friends and bitter foes. At this point, they are both babyface, so therefore good friends – and we’re meant to believe this will be a clean match. I wonder if Roxx (formerly Roxxi in TNA) will ever grow her hair back? Nobody can deny she has a really unique look. Ariel and Roxx know each other all too well, so both athletes’ knew that had to pull out all the stops if they wanted to walk away victorious. They are on a mission right now to elevate Ariel, and a victory over Roxx would be a huge step in that direction. Ariel did indeed score the upset victory over her long time rival, who was gracious in defeat, offering a hand-shake and a hug after the match while Ariel celebrated.

SINGLES MATCH [ WATCH ONLINE ]
Sara Del Rey vs. Serena Deeb: I think Sara Del Rey’s new look is both scary and incredible. I don’t know if it was her intention, but for me she is like the female Undertaker. Her transformation was triggered when she lost the SHIMMER championship to MsChif on Volume #18. Del Rey was taking on independent sensation, Serena Deeb – who has a bright future if she stays on her current track. I have said it a couple times in the last few SHIMMER DVD reviews, but Serena is looking really hot these days. What started out as a normal match between two great competitors, quickly turned into an intense battle of skill and determination. Del Rey was relentless with her assault on Deeb’s leg, destroying her knee by twisting it into disgusting unnatural positions. Eventually Serena had no other choice but to tap out and live to fight another day, but Volume #20 had certainly given birth to a brand new rivalry.

SINGLES MATCH [ WATCH ONLINE ]
Cheerleader Melissa vs. LuFisto: I had to sit up and take notice when I saw Melissa vs. LuFisto listed on the cover of this DVD. I have heard great things about the chemistry shared by these two strong style female fighters. Finally I was going to experience it first hand. The match was very intense, but a little too short for my taste, and ended with Melissa planting LuFisto with a Kudo-driver for the 1-2-3! I’m praying for a rematch.

SHIMMER CHAMPIONSHIP MATCH [ WATCH ONLINE ]
MsChif vs. Mercedes Martinez: There was no existing drama between the champion and her challenger, except for the good old fashioned thrill of the chase. Mercedes Martinez had come a long way in a short period of time since returning from injury in 2008 and working her way back up the ladder. Mercedes was vicious with her chops, even causing the chest of MsChif to bleed late in the match. Mercedes also bent MsChif into strange positions, in an attempt to wear her down. MsChif proved that she can take a licking and keep on ticking, as she recovered from a severe beating to connect with the Desecrator on her way to retaining the SHIMMER championship!