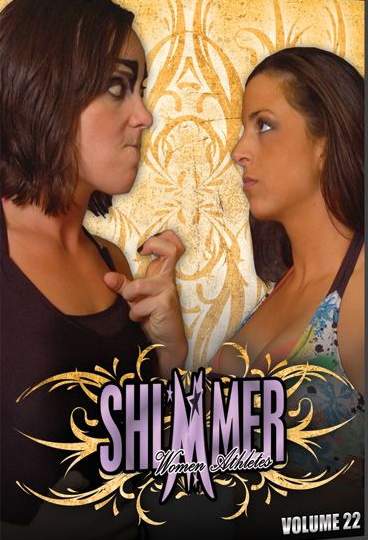 SINGLES MATCH [ WATCH ONLINE ]
Rain w/Jetta vs. Daffney: This match was way more competitive than it should have been, but Daffney held her own against the talented Minnesota Home-wrecker. Daffney scored a lot of offense, and debuted a new submission hold called the “Leggo my Leg-oh!” (or something like that!). Daffney could not get the job done, and Rain proved that she is the more dominant athlete between the two!

SINGLES MATCH [ WATCH ONLINE ]
Cat Power vs. Danyah: One look at Cat Power prowling towards the ring in her sultry kitty mask is enough to make me purr. She has a lot of physical assets, and is building an in-ring reputation while learning her craft very quickly. Danyah, as I’ve said before, is a fanatically fit Canadian with a few more years of experience under her belt. I really thought this would be a great opportunity for Cat to climb up the SHIMMER ladder, but it was newcomer Danyah who secured her first victory in SHIMMER competition!

SINGLES MATCH [ WATCH ONLINE ]
Amazing Kong vs. Rachel Summerlyn: It was feeding time for Amazing Kong, and she was in the mood for some Texas cuisine. Rachel Summerlyn is no slouch; although she is new to SHIMMER, she has developed a reputation on the independent circuit for being a tough hardcore wrestler – despite her pink and blonde image. They made a big deal about the match being refereed by Laura Mattano, who has disqualified Kong in recent history, for getting a little carried away with her opponents in the ring. Kong even power-bombed Mattano on Volume 17 for trying to enforce the rules. Kong made a Texas pancake out of Summerlyn with a devastating Splash off the second rope for the wiN!

IN THE RING
Valerie Malone & Allison Danger + Portia Perez: A noticeably pregnant Allison Danger was interviewed by the equally pregnant Valerie Malone in the ring. Danger said she was determined to come back from her injury and be better than ever, but – opps – she got pregnant instead! Portia Perez interrupted and told the weary fans to shut up because she had something to say. Portia said she beat Danger in the ring on July 5th, but Danger is still running her mouth on the SHIMMER message boards. Danger fired back and cut a short promo on Perez. Portia said she would not only end Danger’s career, but she’ll also end something else! Portia bounced off the ropes and tried to tackle Danger, but she was speared by referee Bryce Remsburg and dragged away by a total of five referees! That was a pretty controversial angle that didn’t generate as much heat as I thought it would!

TAG TEAM MATCH [ WATCH ONLINE ]
The Experience (Lexie Fyfe & Malia Hosaka) vs. The Pink Ladies (Madison Eagles & Jessie McKay): I love seeing the Pink Ladies coming over from Australia. They bring a whole different atmosphere with them. The more experienced team of Hosaka & Fyfe sent the Pink Ladies packing back to Australia with a big LOSS, but Eagles & McKay were both appreciated by the SHIMMER fans with a “please come back!” chant.

SINGLES MATCH [ WATCH ONLINE ]
“Latina Sensation” Mercedes Martinez vs. Amber O’Neal: Despite a terrible win-loss record, Amber O’Neal shook her money-maker all the way to the ring with both confidence and arrogance. She does have a smoking hot body, I must admit. O’Neal was faced with the challenge of wrestling some Latina heat, in the form of Mercedes Martinez! The Latina hotness was way too much for Amber’s gym-manufactured hotness, so Martinez continued her rise up the ranks – still looking for a SHIMMER title shot!

SINGLES MATCH [ WATCH ONLINE ]
Cheerleader Melissa vs. “Girl Dynamite” Jennifer Blake: I’m developing a lot of respect for cute Canadian wrestler Jennifer Blake. One look at her and you might think she was just getting by on her looks, but she is a real spitfire in the ring and gives it her all in every match. Blake could have gone the easy route and invested in a tan and fake boobs to get over (cough, Velvet Sky, cough) but she did it by creating a respectable pro-wrestling character instead. What can I say about Melissa that I haven’t said before, other than the obvious statement that she is one of the best ever. I can’t believe I’m about to write this, but I think it’s possible that Girl Dynamite overshadowed the Cheerleader in this match! Blake worked her pretty little ass off, and was the star of the match – despite coming out on the losing end after being planted by Melissa’s Air Raid Crash finisher!

SINGLES MATCH [ WATCH ONLINE ]
Daizee Haze vs. Miss Natural: This was Miss Natural’s second match in SHIMMER, but definitely her first test as an in-ring competitor. I was really impressed with Natural’s victory over jobber Lorelei Lee on Volume 21. Natural took the fight to the Haze early, and nearly scored an early victory with the dreaded sleeper-hold. Haze survived, escaped, and recovered well enough to mount a comeback and get her hand raised over Miss Natural.

IN THE RING: Sara Del Rey came out and cut an angry promo about being mistreated by the people of SHIMMER. Del Rey said she was bringing in somebody to represent her in SHIMMER, and introduced her ROH manager – the great “Sweet & Sour” Larry Sweeney! Sweeney insulted the fans and called Del Rey the best women’s wrestler in the world. Sweeney asked Del Rey how many times she had defeated Serena Deeb, and she answered TWICE. Sweeney said there is no need for Del Rey to be in the ring with someone she has already beaten twice. Sweeney said it was just a matter of time before Del Rey is SHIMMER champion again. Sweeney said they would take the SHIMMER title and defend it in Ring of Honor. Sweeney high-fived Del Rey and they went to the limo to enjoy some Sushi (and no that is not a euphemism)..

SINGLES MATCH [ WATCH ONLINE ]
Nikki Roxx vs. Jetta w/Rain: As I’ve said before, Jetta is the UK version of Lacey (Rain’s former partner), and since Lacey has basically retired from wrestling, naturally she would be the perfect replacement in the Home-wrecking Crew. Jetta has some good ring skills, but relies too much on comedy spots for the first 10 minutes of almost every match she is in. Roxx isn’t one to shy away from a little fun, so they really got the live crowd riled up before the action picked up. Jetta was a goofy mess the whole match, and Roxx did her best to maintain her focus and not fall into the loud-mouth Brit’s trap. Eventually, Jetta’s mind games payed off and she avoided the Barbie-crusher by using an eye-rack – then rolled her up for the 1-2-3! Jetta proudly proclaimed “Nikki Lost!” right before disappearing behind the curtain!

SHIMMER TAG TEAM TITLE MATCH [ WATCH ONLINE ]
Ashley Lane & Neveah vs. The Canadian Ninjas (Portia Perez & Nicole Matthews): The Canadian Ninjas proudly showed their faces before the Berwyn crowd after Portia’s dastardly acts earlier that night when she threatened the life of Allison Danger’s unborn baby. The crowd chanted “baby killer!” at Perez, something she may very well feel terrible about one day. They pretty much had to show their faces if they wanted their opportunity at the coveted SHIMMER Tag Team championships. Portia Perez was the most experienced competitor in this match, which is crazy because she was only 21 at the time. The Ohio girls team of Ashley Lane (who wrestles as Madison Rayne in TNA) and Neveah successfully retained their SHIMMER tag team titles and will move on to their next challengers!

INTRNATIONAL DREAM MATCH [ WATCH ONLINE ]
“The Croatian Panther Wesna Busic vs. LuFisto: Two of my absolute favorites squared off in an international dream match. I want to know how Dave Prazak knows about MY dreams! I’m starting to realize I have a lot of “favorite” female wrestlers, because most of them appear on SHIMMER DVD’s. There was a feeling out process from the start, as both women sized the other up. I don’t think I have to tell you that there were many stiff kicks, and yes, I could feel every one of them – even from the safety of my home office chair. Not to mention the disfiguring roaring elbows near the end of the match. The finish saw Wesna plant LuFisto with a CB4-driver, but only got a 2-count! Wesna went for a second CB4-driver, but LuFisto countered and hit a sick Burning Hammer to earn the victory! Seriously, Wesna landed flat on the top of her head – OUCH! LuFisto helped a groggy Wesna to her feet and both showed good sportsmanship.

SHIMMER CHAMPIONSHIP MATCH [ WATCH ONLINE ]
“Your Soul’s Tormenter’ MsChif vs. “Portuguese Princess” Ariel: They showed some clips of Ariel’s rise up the ranks of SHIMMER, including a disqualification victory over Amazing Kong on Volume 17, a clean victory over her friend Nikki Roxx on Volume 20, and the blockbuster fourway win over Melissa, Martinez, and Kong on Volume 21 to earn her title shot. I don’t think anyone believed Ariel would become champion, but it’s nice for a semi-main event showdown. MsChif has to make Ariel look like a million bucks, otherwise all the girls who put Ariel over would look foolish. MsChif did a decent job, and finished off Ariel with the Desecrator to retain the SHIMMER championship! After the match, Sara Del Rey attacked MsChif and robbed her of any celebration. Serena Deeb went after Del Rey and their match began!

GRUDGE MATCH MAIN EVENT [ WATCH ONLINE ]
Sara Del Rey vs. Serena Deeb: SHIMMER champion MsChif has promised to give Serena Deeb a title shot if she could defeat Sara Del Rey, so Deeb has all the incentive in the world to finally get past Del Rey. Del Rey did not intend to wrestle on this night, but when she took it upon herself to attack MsChif after the title match, she ended up in the middle of an unscheduled grudge match! This feud with Del Rey has turned Serena from a sports entertainer into a serious pro-wrestler. It’s ironic that she (Serena) was scooped up by WWE shortly after her main event run in SHIMMER. Del Rey was forced to play defense, as Deeb’s aggression kept her going strong. Del Rey dished out her trademark punishment, and even stomped Deeb’s arm on top of the ring steps! They brawled around ringside, and Deeb back-dropped Del Rey into the front row – thus making dreams come true for at least two lucky fans. Finally they ended up back in the ring, and Deeb began a flurry of offensive moves. Deeb’s energy level went down and Del Rey took control once again. Serena turned the tables again and went in for the kill. Deeb went for a Crucifix, but Del Rey dropped her down to the mat. Deeb countered the pin, with a pin attempt of her own, but only got a two-count. Del Rey struck Deeb with a weird rolling kick and then applied an arm submission. Deeb fought out of the move and got fired up for one more burst of energy. Unfortunately Deed ran chest-first into Del Rey’s boot, and then Del Rey followed up with a stiff boot to Deeb’s face! Deeb no-sold it and jumped up off the mat, filled with adrenalin from head to toe! Deeb bounced off the ropes and speared Del Rey to the mat and miraculously scored the 1-2-3 to win the match and earn a future shot at the SHIMMER championship!! Excellent match!!!!! A furious Del Rey attacked Deeb until MsChif ran down to make the save. Larry Sweeney showed up and screamed for order to be restored. MsChif & Deeb began to double-team Del Rey, but Sweeney successfully pulled her out of the ring to save her life. Sweeney yelled at the referee, “the match is over, you’re doing a horrible job!” in the hilarious way that only Sweenay can do it.